A Scheduled Monument in Sproxton, Leicestershire 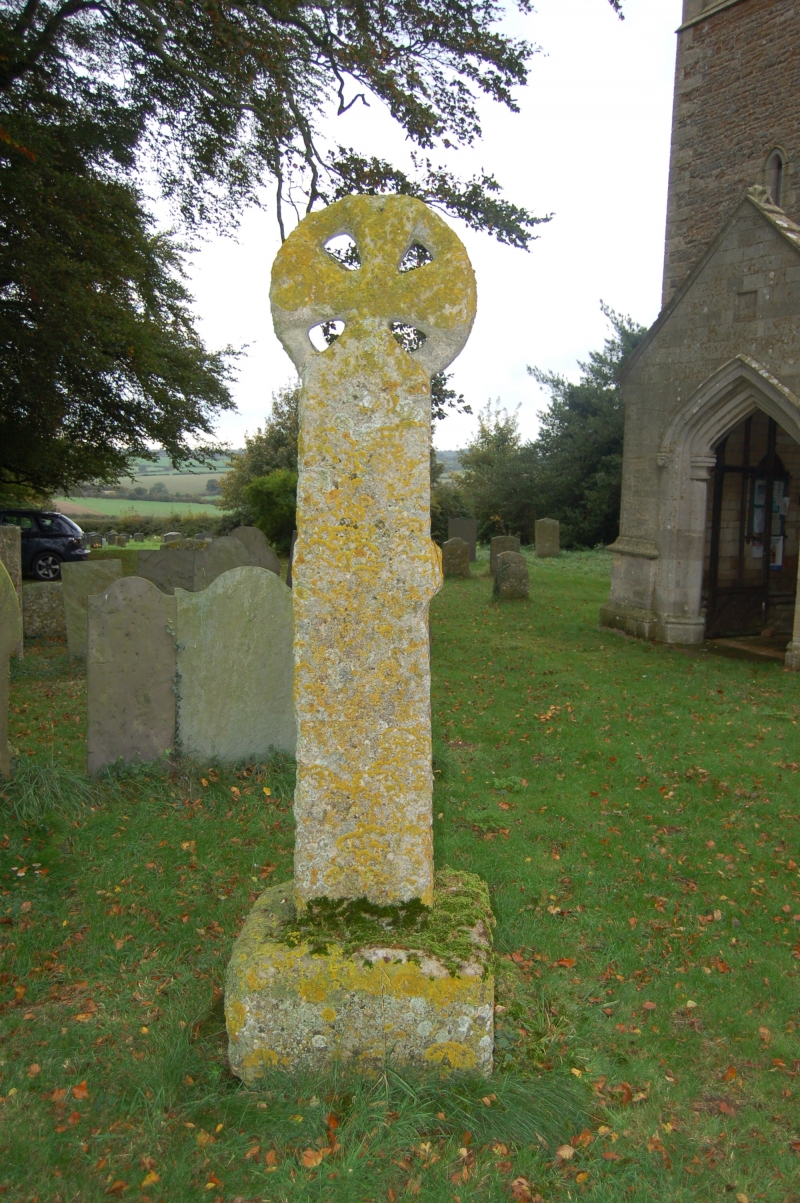 The monument includes an Anglo-Scandinavian stone cross located within the
churchyard of St Bartholomew's Church, Sproxton, approximately 7m to the
south east of the south porch. The cross is probably 11th century in date and
takes the form of a base, comprising a stone slab and a socket stone, and a
shaft and cross-head which have been carved from a single block of stone.
The socket stone stands on a stone slab which is now in two parts and mostly
below ground level. The socket stone is rectangular in section at the base
with moulded and chamfered corners rising to a top of rectangular section. Set
into the socket stone is the shaft which is also of rectangular section,
tapering upwards to a collar or band, above which the shaft continues to
taper towards the head. The head itself is of ring head type with pierced
interstices, and the ring itself is decorated with interlace. The western face
of the shaft is divided into two ornamental panels by the collar; the lower is
decorated with regular plaitwork and a zoomorphic beast, whilst the interlace
decoration on the upper panel is now badly eroded. The lower and upper panels
on the northern face carry ornamental patterns of interlocked circular rings
and interlace respectively. The southern face has a continuous vine-scroll
ornamentation. Any decoration on the eastern face of the shaft has been eroded
away. The full height of the cross is 2.35m.
The grave marker to the south east of the cross is excluded from the
scheduling, although the ground beneath is included.

An Anglian cross is a free standing upright structure, usually of stone and
frequently heavily decorated, erected in a variety of locations between the
seventh and eleventh centuries AD. They are found throughout England, although
they are particularly concentrated in the north and west. They appear to have
served a variety of functions. Some are associated with established churches
and monasteries and may mark burial places, focal points used in religious
services, or the boundaries of ecclesiastical land holdings. Others may have
marked routeways or other gathering points for local communities.
Anglian crosses usually incorporate a shaft and a cross-head, although this is
often missing. Sometimes they are set within a socket in a large stone base.
The shafts and heads are often decorated with a rich variety of abstract
ornament, the most common motifs being plant scrolls and interlace patterns,
while figure carving is much rarer. The form taken by this ornament is varied
both according to region and chronology. The earlier, pre-Viking examples were
part of the great tradition of Anglo-Saxon decorative art, while later
examples are heavily influenced by Viking styles and mythology and are related
to the Viking infiltration and settlement of the north of England.
Around 2000 examples of Anglian crosses have been identified and this is
likely to represent only a small portion of those originally erected. Their
survival has been affected by local conditions, attitudes, and religious
sentiment. In particular, some were defaced or destroyed by iconclasts during
the Reformation. Others were simply taken down and reused in new building
works. Both as individual examples and when taken as a group they provide an
important insight into changing art styles and contribute significantly to our
understanding of pre-Conquest ecclesiastical and settlement history. The
Viking period crosses, for example, contribute to studies of the impact of the
Scandinavian newcomers in England. All well-preserved examples of Anglian
crosses which survive as standing monuments will be identified as being
nationally important and will merit protection.

The Anglo-Scandinavian cross at Sproxton survives well and is the only known
Leicestershire example of an early medieval cross with a complete cross-head
still attached to its shaft. The Scandinavian-influenced decoration on both
the shaft and the head make an important contribution towards an understanding
of the regional and chronological variations in the design of early medieval
crosses. Situated close to the south porch of the church, the cross is thought
to stand in its original position, indicating that archaeological deposits
relating to its construction and use are likely to survive intact below the
present ground surface. The cross has not been restored and has continued in
use as a public monument and amenity from at least the 10th or 11th centuries
to the present day.