A Scheduled Monument in Dunster, Somerset 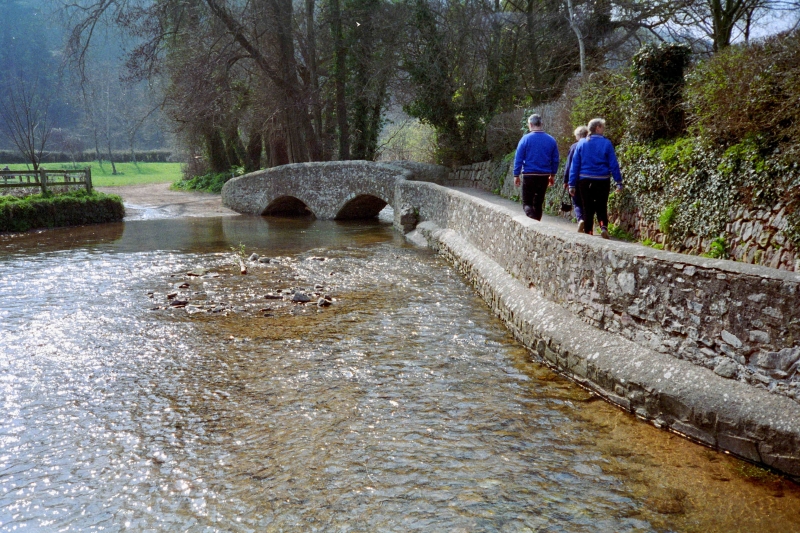 The monument includes a packhorse bridge known as `Gallox Bridge' which spans
the River Avill on the southern outskirts of Dunster.
The bridge has a roadway width of 1.2m, a total width of 1.9m and is 13.5m
long. It has two arches which are slightly pointed and have double arch rings.
Each side has four narrow chamfered ribs. There is a cut-water on the upstream
side which is 0.5m long.
The bridge leads to a causeway skirting a ford on the north side. It is still
used as a public footbridge, and is a survivor of the simple type of stone
bridge to be found in the West Country and elsewhere. It is reputed to be of
15th century date. The bridge is Listed Grade I and is in the care of the
Secretary of State.

Multi-span bridges date to the medieval period and were constructed in stone
or wood. They carried a road or trackway across a river by means of two or
more arches supported on piers set into the bed of the watercourse. Bridges
frequently replaced earlier fords. Individual bridges were commonly located in
relation to settlements. Multi-span bridges were common during the medieval
period. However a survey in the 1930s recorded only 150 bridges of medieval
date still standing, excluding those in Devon and Cornwall. All multi-span
bridges which retain much of their medieval fabric are worthy of protection.
The multi-span bridge in Dunster is a robust monument surviving in its
original form and in good condition. It still serves the purpose for which it
was constructed, and is an integral part of the medieval landscape of Dunster.