A Scheduled Monument in Flamborough, East Riding of Yorkshire 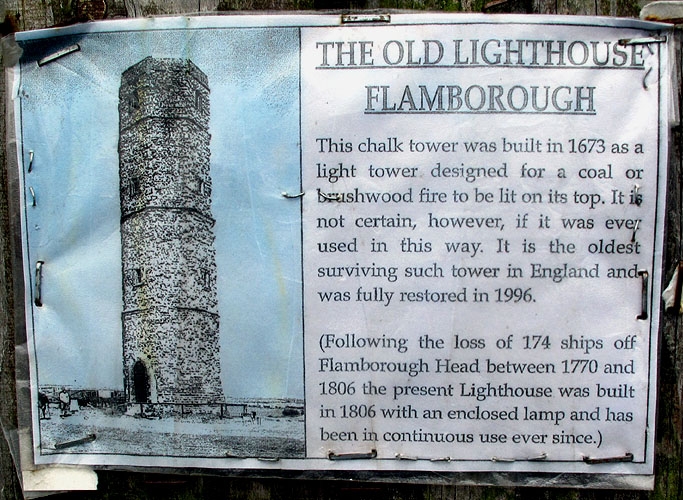 The monument is the former Flamborough Head lighthouse and includes an
octagonal tower constructed of coursed chalk rubble with stone dressings. It
was built in 1674 as a business venture by Sir John Clayton, but never used.
The lighthouse comprises an octagonal tower of four stages and a brick
parapet, all marked by moulded string-courses. There is a boarded door with a
pointed red brick surround and another blocked door in pointed yellow brick to
the landward side. On the cardinal and seaward facing sides there are
rectangular windows to the three upper levels having stone surrounds with
plain chamfers to the reveals, sills and lintels. Behind the parapet there is
a low roof. The interior contains 20th century wooden stairs and floors. The
cliffs around the headland have long been recognised as dangerous for passing
shipping, including Flamborough's own fishing vessels.
This lighthouse proved uneconomical to run as voluntary dues from passing
ships proved inadequate. From around 1840 until the turn of the century it was
used as a marine telegraph station.
Since its construction it has always been a navigational landmark for vessels
entering Bridlington Bay, and is still considered to be a useful guide to
local fishermen. The monument is also a Listed Grade II* building.
Modern post and wire fences bounding the monument and separating it from the
golf course in which it is situated are excluded from the scheduling, as are
all modern fixtures and fittings, although the ground beneath is included.

Lighthouses, constructed to alert shipping to dangerous shorelines, have a
history as early as maritime trade itself. The earliest examples are noted
mainly in the Mediterranean where they were a relatively common feature in
Roman times. Medieval lighthouses took the form of towers with areas, or
`oratories', for the burning of coals or faggots, the light from which warned
passing shipping. At Tynemouth, for example, a light was burnt on the turret
at the east end of the priory church. Other early lighthouses were probably
founded at chapels sited on dangerous headlands. There are few surviving
remains of early lighthouses and much of the evidence used to reconstruct
their architecture comes from ecclesiastical records.
Documentary sources also confirm the existence of medieval `secular lights',
such as those related to the Cinque Ports where local barons had the right to
levy dues for the upkeep of the lights. Other private lighthouses were also
raised from time to time, an example being the old lighthouse at Flamborough
Head, erected in 1674 as a business venture but never used because suitable
donations were not forthcoming from passing shipping.
Many of the `ecclesiastical lights' were lost when Henry VIII dissolved the
monasteries, although some responsibility for the safety of shipping had by
then been passed to the Corporation of Trinity House established in 1514. In
the beginning the corporation was charged with safeguarding the coastline
simply by providing a supply of efficient pilots. It was much later in its
history that its duties included the erection and supervision of lighthouses,
the role for which it retains responsibility and remains famous.
Lighthouse structures ranged from the use of a simple fire lever, known as a
swape, for the elevation of a fire basket, through to masonry towers
supporting a brazier or fire basket. Purpose-built masonry towers eventually
became the norm and housed a range of equipment of increasing complexity. Oil
was used as a fuel from the 17th century, and by the 1850's the first electric
lights were being introduced.
Lighthouses are found throughout the coastline of the British Isles. Often
they form groups specifically placed to guide seafarers along a difficult
coast. Their numbers varied over time and are difficult to reconstruct
accurately as many were short-lived or largely unrecorded in documentary
sources. Only two certain examples of Roman lighthouses have been recorded,
the best of which still stands at Castle Hill, Dover. During the medieval
period they were more common, although few survive in a recognisable form. By
1875 there were around 100 major lights around the British mainland, supported
by a plethora of minor lights, some of which were located on seagoing vessels.
By the 1970's the Trinity House Lighthouse Service was maintaining 90 major
lighthouses, 30 manned light vessels and around 700 light buoys. A number of
other privately owned and maintained lighthouses also existed.
All identified Roman and medieval lighthouses are nationally important. Post-
medieval examples retaining significant original or early equipment and
fittings are also considered likely to merit statutory protection.

The old lighthouse, Flamborough, although never used, is in good condition and
represents a unique survival of a 17th century monument lighthouse in England
in an unaltered state. There is good historical data on its conception and
construction, giving insights into the maritime economy of the period.

Other
Information from Humberside SMR, Various, (1994)