A Scheduled Monument in Sandringham, Norfolk 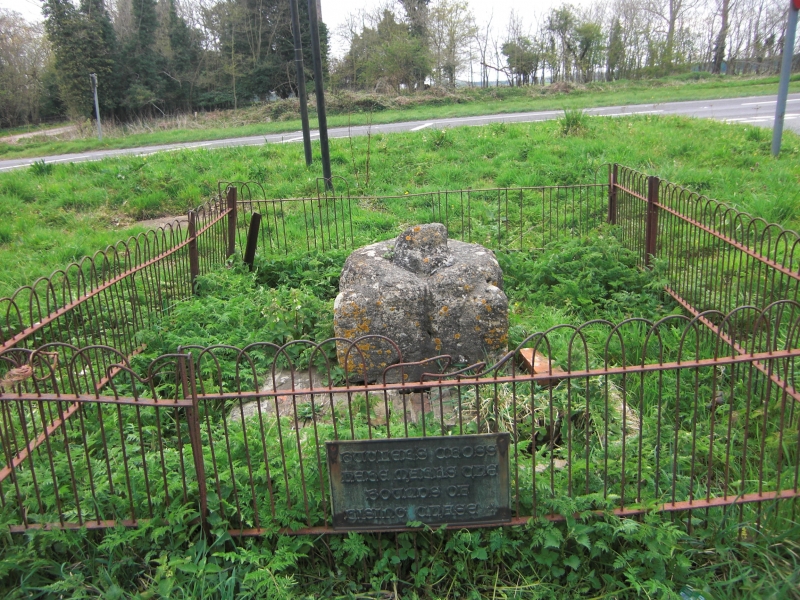 The monument includes the remains of a standing stone cross located at the
junction of the B1439 to West Newton and the A149. The ruins of St Felix's
Church and the site of the medieval village of Babingley lie 1km to the west.
The cross is medieval in date and constructed of stone in two parts, a socket
stone and a shaft, standing on a platform of post-medieval bricks surrounded
by a stone kerb. The basal platform stands 0.2m high above the surrounding
surface and is square in plan with dimensions of 1.5m on each side. The
socket stone which forms the lower part of the cross measures 0.5m in height
and c.0.65m square at the foot, with chamfered angles in its upper parts, so
that the upper surface is octagonal. At the centre of the upper surface is a
square mortice into which the foot of the cross shaft is set in lead, and
above this the weathered stump of the shaft stands to a height of 0.2m.
The cross once marked the boundary of Rising Chase and is shown on a map of
the Chase dated 1588. The name `Butler's Cross' derives from the de Botelers
who held the manor of West Hall, Babingley, from the mid-13th century.
The cross is enclosed by low iron railings which are excluded from the
scheduling, although the ground beneath them is included. Attached to the
railing is a cast iron plaque with an inscription recording the name of the
cross and the boundary which it marked.

Butler's Cross is a good example of a medieval boundary cross. It is known to
have stood in its present location at a road junction since at least the
16th century, and archaeological deposits relating to its construction
and use are likely to survive in the ground immediately around and beneath it.
Its historical association with both Rising Chase and the de Boteler family
give it additional interest, and it has continued in use as a public monument
from the medieval period to the present day.