A Scheduled Monument in Elson, Hampshire 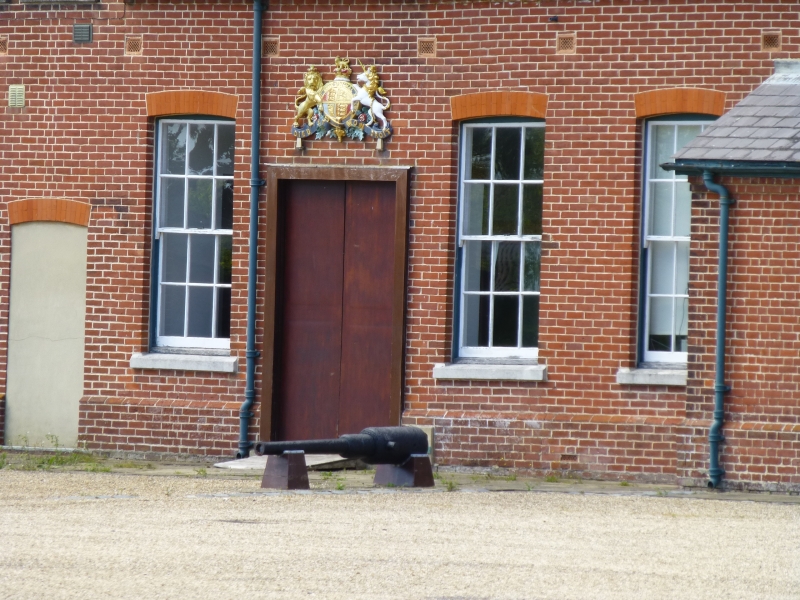 The monument includes Fort Brockhurst, a large and sophisticated mid 19th
century brick built fort which lies on the north side of Gosport. Brockhurst
is one of a line of five forts, constructed between 1858 and 1862 which
together make up the `Gosport Advanced Line', intended to provide landward
protection for the great naval and dockyard establishment at Portsmouth.
The fort, which is polygonal in overall plan and measures over 430m north-
south by 340m east-west, has main ramparts facing WNW. These carried 19 heavy
guns above casemates and are flanked by shorter ramparts each of which
supported eight guns with a further nine in casemates below. To the rear of
the ramparts, which surround a parade ground, lies a circular keep, armed with
20 light weapons and intended as a place of final refuge. Both keep and main
fort are surrounded by wet moats into which protrude three caponiers, a double
one at the mid point of the main rampart, and single examples at its
extremities. Beyond the moat to the front of the fort and reflecting the
position of the central caponier is an earthwork redan flanked by a glacis
which protects a covered way for riflemen.
Even before its completion, Fort Brockhust was overtaken by events and only
lack of finance prevented the Gosport Advanced Line being superseded by a line
of forts even further west. As a result, Fort Brockhurst was never fully
armed and for most of its military life was used for accommodation and
storage. In World War II three casemates on the north flank were
destroyed by bombing.
Excluded from the scheduling are the recent additions to the former Regimental
Institute which lie within the parade ground; the ground beneath these is,
however, included.
The monument is in the care of the Secretary of State.

The Royal Commission fortifications are a group of related sites established
in response to the 1859 Royal Commission report on the defence of the United
Kingdom. This had been set up following an invasion scare caused by the
strengthening of the French Navy.
These fortifications represented the largest maritime defence programme since
the initiative of Henry VIII in 1539-40. The programme built upon the
defensive works already begun at Plymouth and elsewhere and recommended the
improvement of existing fortifications as well as the construction of new
ones.
There were eventually some 70 forts and batteries in England which were due
wholly or in part to the Royal Commission. These constitute a well defined
group with common design characteristics, armament and defensive provisions.
Whether reused or not during the 20th century, they are the most visible core
of Britain's coastal defence systems and are known colloquially as
`Palmerston's follies'. All examples are considered of national importance.

Fort Brockhurst, the construction of which had already started prior to the
1859 Royal Commission, is a fine and exceptionally well preserved example of
the fortifications of this period, its polygonal form marking an innovation
in fortification design. Fort Brockhurst is one of the five forts which made
up the Gosport Advanced Line. Together these forts represent a coherent and
distinctive group of sites within the overall scheme of mid 19th century
coastal defence.