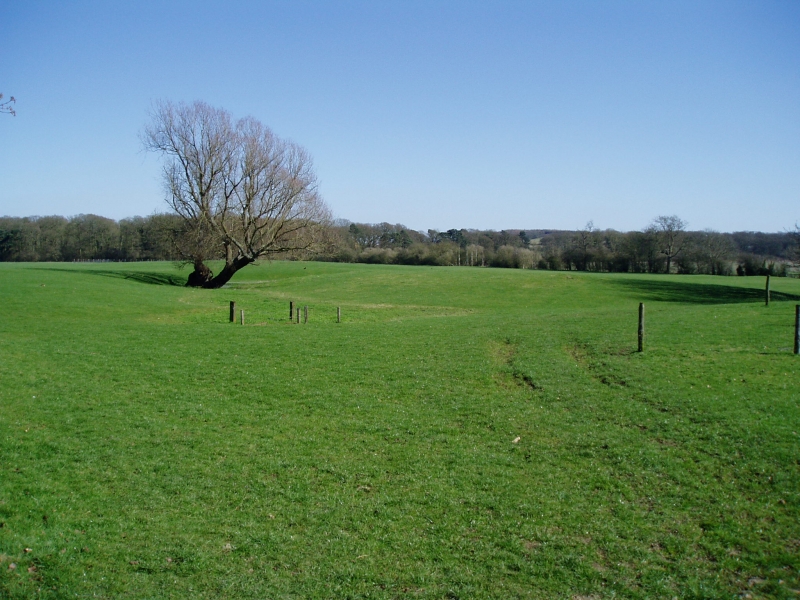 The village earthworks occur within two areas, lying on either side of the
Lubenham Road. The southern area includes a moated site, house platforms and
enclosures ranged around the 13th century church of St Nicholas. The house
platforms and garden plots lie on either side of a north-south running hollow
way, 1m deep, which runs up towards Lubenham Road. In the south of the area
lie a number of ditched fields and small enclosures relating to manorial
paddocks. Beyond these lie a stream and part of the medieval ridge and furrow
field system which is defined by a headland on its southern side. The moated
site lies just to the north east of the church. It has a moat island about
35m square surrounded by a ditch up to 12m wide and 2m deep. A spring at the
north west corner supplied water for the moated system. The moat is
considered to be the site of the medieval manor house of the village and at a
later date a new manor house was built to the north of the church and west of
the moat. In about 1874 this house was demolished and the present road cut
across part of the village.
The northern area includes an east-west hollow way, running parallel to the
Lubenham Road; a number of well-defined house platforms and garden plots can
be identified next to the hollow way and adjacent to the existing modern
houses. During the construction of these modern houses in the 1950s finds of
medieval and Roman pottery were made. Further Roman finds, including 3rd
century pottery, were unearthed during grave digging and church restoration
activities in 1945.
All made up roadways and paths on the site are excluded from the scheduling,
but the ground beneath these features is included.

Sometimes associated with shrunken medieval settlements are the sites of
prestigious residences surrounded by moats. These sites form a significant
class of medieval monument and are important for understanding the
distribution of wealth and status in the countryside. Many examples provide
conditions favourable to the preservation of organic remains.
Marston Trussell shrunken medieval village has very well preserved earthworks
with a diversity of features which are largely undisturbed. These earthworks
include the sites of two successive manor houses and of the medieval village
and outlying fields, all of which lie around the early church. The site
therefore has considerable archaeological potential for preserving evidence of
the history and economic development of a nucleated village from the medieval
period to more recent times.