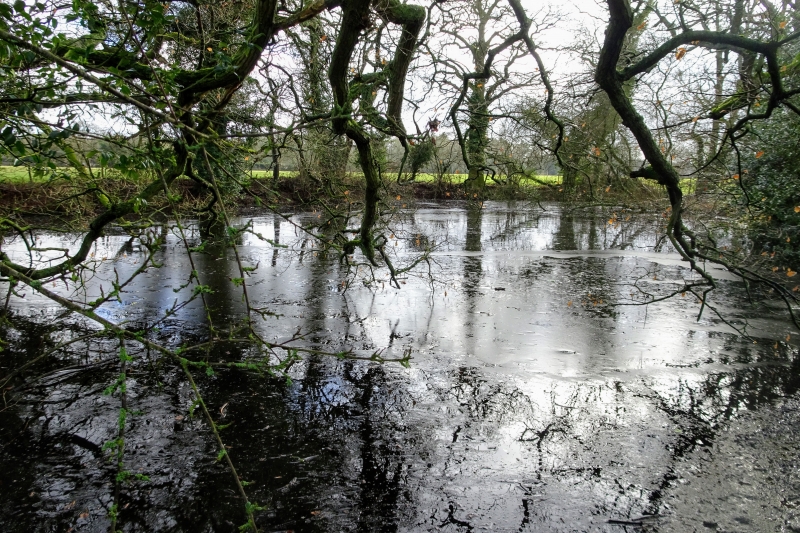 The monument comprises a complex including a moated site and three
associated fish ponds 300m south- west of St. Peter's Church, Ufton
Nervet. All are aligned end-on from NNW-SSE, two fish ponds lying to
the south of the moat and one to the north. The moat has external
dimensions of 80m NW-SE by 60m NE-SW and contains no causeway. The
moat survives to a width of 10m and averages 3m deep. It is
seasonally water- filled, often to a depth of 1m. The island measures
35m NE-SW and 45m NW-SE and is lower than the land surrounding it.
The site was partially examined in the 19th century, revealing bridge
piles, a gateway and other foundations. The site was probably the
manor house of Ufton Robert, mentioned in 1333 as belonging to
William de Uffington. The northernmost fishpond measures 50m NW-SE by
30m NE- SW, the southernmost pond measures 45m NW-SE by 30m NE-SW and
the third pond is c. 30m square. The fishponds are water- filled and
vary in depth between 1 and 2m.

Around 6000 moated sites are known in England. They consist of wide
ditches, often or seasonally water-filled, partly or completely
enclosing one or more islands of dry ground on which stood domestic
or religious buildings or, in some cases, which were used for
horticulture. A fishpond is one or more artificially created pools of
slow moving fresh water for the purpose of cultivating, breeding or
storing fish. Both are significant classes of monument in the Middle
Ages and are important to understanding the distribution of wealth
and status in the countryside as well as providing a valuable insight
into aspects of the rural economy. Both provide conditions favourable
to the survival of archaeological remains. Although both types of
monument are common in England, relatively few survive in Berkshire.
This example is particularly important as it survives well, maintains
good historical documentation, is known to contain important
archaeological features and represents a fine example of a combined
moat and fishpond water- management complex.