A Scheduled Monument in Bushwood, Warwickshire 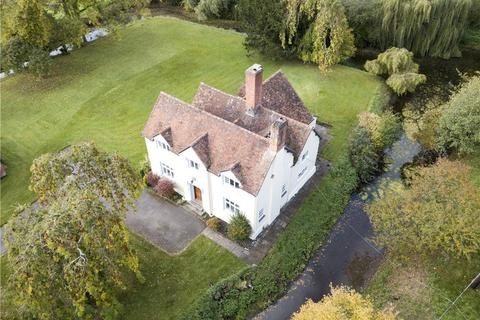 The monument is situated in an isolated context adjacent to a stream channel
flowing north-south and includes a moated site.
The moated site has external dimensions of approximately 70m square. The arms
of the moat measure up to 12m wide and are waterfilled. The extreme eastern
end of the northern moat arm has been infilled and is partly overlaid by an
outbuilding of the present Bushwood Hall. At the north western corner of the
site, the moat projects slightly westwards to form a pond area, and this is
included in the scheduling. There is an external bank along the northern side
of the moated site, approximately 5m wide. The moated island is slightly
raised above the surrounding ground surface particularly on its western side.
The northern part of the island is occupied by the present Bushwood Hall, a
Grade II Listed Building, which dates from the 17th century with 19th century
alterations. It is not included in the scheduling although the ground below is
included. Access to the moated island is thought to have been across the
eastern arm of the moat and an oak cantilever drawbridge was recovered from
this moat arm during dredging operations in 1961.
Bushwood was, at one time, the property of the Bishop of Worcester.
Documentary sources indicate that in 1314 Sir John de Bishopesdon arranged
for a gatehouse to be constructed at the site. The room above the gatehouse is
known to have included two fireplaces and two privies.
The present Bushwood Hall, the former pigsty situated in the south eastern
part of the moated island, and the timber bridges across the western and
eastern arms of the moat are all excluded from the scheduling; the electricity
pole beyond the northern moat arm, the outbuilding at the north eastern corner
of the site, the wall which runs adjacent to the eastern moat arm and the
surfaces of all paths and driveways are also excluded, but the ground beneath
all these features is included.

Bushwood Hall moated site survives well and is largely unencumbered by modern
development. The moated island will retain structural and artefactual evidence
for the original house which existed here. Additionally, organic material will
be preserved within the waterlogged moat ditches which will allow an insight
into the economy of the site's inhabitants. The importance of the site
is enhanced by the survival of related historical documentation.

Books and journals
Robert, B K, 'Transactions of the Birmingham Archaeological Society' in Moated Sites In Middle England, , Vol. 80, (1962), 35