A Scheduled Monument in Fillongley, Warwickshire 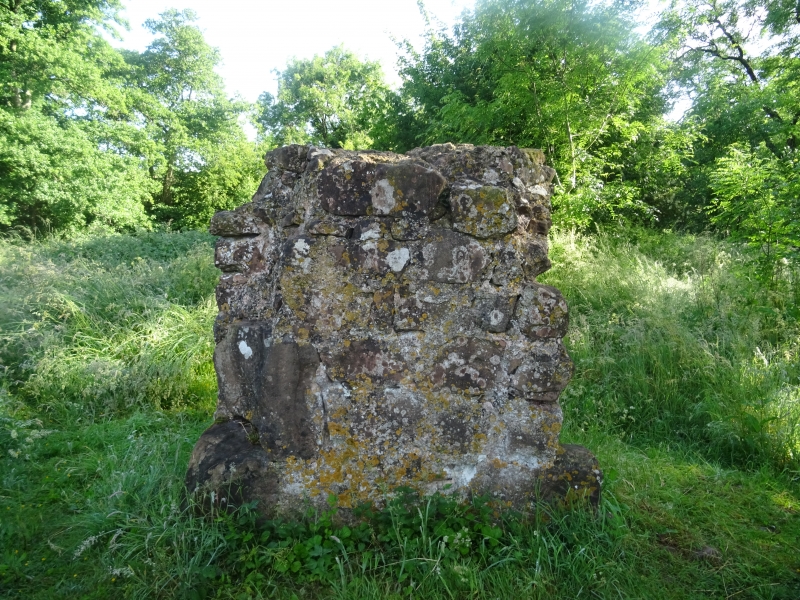 Church of England Parish: Fillongley St Mary and All Saints

The monument is situated approximately 80m south west of Castle Farm on the
southern outskirts of the village of Fillongley. It includes the masonry and
earthwork remains of Castle Yard, a ringwork castle and its associated bailey.
The site occupies an area of approximately 2ha and has been constructed on an
area of land which is defined by two stream channels. The stream to the north
of the ringwork flows west-east and forms the northern boundary to the site,
whilst the second stream, situated in the eastern part of the site, flows from
east to north. A third stream channel runs through the central part of the
site and flows northwards into the stream defining the site's northern edge.
The streams are thought to have been diverted at the time of the castle's
construction in order to form its southern outer defences. They also provided
the water supply for the inner defensive ditches. The ringwork itself, is
situated in the western part of the site and is surrounded by a 12m wide ditch
which, with the exception of its waterlogged northern section, is mostly dry.
The water supply for the ditch originally entered from the west and the south.
An external rampart is visible beyond the western, northern and southern sides
of the ditch. The ringwork has a roughly circular plan and has been
artificially raised above the surrounding ground surface. Traces of an inner
bank are visible along the north eastern and western sides of the ringwork
enclosure; this bank is thought to have been present originally on all sides.
Access into the ringwork is thought to have been by means of a causeway across
the eastern section of its enclosing ditch. The ringwork enclosure itself has
an uneven surface, indicating the survival of buried features beneath the
ground surface. In the north eastern part of the ringwork a large block of
in situ masonry is visible standing to a height of c.1.9m. It is built of
local sandstone and represents a rectangular building. The remains of a
circular staircase, situated adjacent to the block of standing masonry, have
been uncovered in the past though they now lie buried beneath the ground
surface. Fragments of masonry are also visible in the north eastern parts of
the enclosure.
To the north east, east and south east of the ringwork is a polygonal-shaped
bailey. It is bounded along its north western side by the northern stream
channel, and to the east and south, by a 6m wide ditch; the ringwork ditch
defines the bailey's western side. The north eastern section of the bailey
ditch has been infilled and is no longer visible on the ground surface. It is
thought to have connected with the northern stream channel and will survive as
a buried feature. A stream channel now flows north/south through the central
part of the bailey. A dry, 10m wide channel, aligned south west-north east, is
visible in the northern part of the bailey. This feature is thought to be
original and divides the bailey into two courts.
Castle Yard was occupied by the Hastings family from the early 12th century
and the site became their chief residence in Warwickshire. The last of the
Hastings line died in 1389 and the site became part of the Bergavenny baronry
which was held by the Beauchamps and the Nevilles. Castle Yard is thought to
have been abandoned during the late 14th or early 15th century.
All fence posts at the site are excluded from the scheduling, but the ground
beneath them is included.

Castle Yard survives well and is one of only two known examples of this class
of monument in Warwickshire. The foundations of medieval structures will
survive as buried features within both the ringwork and the bailey, while the
accumulated fill of the ringwork and bailey ditches will retain information
valuable for an understanding of the environment and economy of the site's
inhabitants. Additionally, the buried land surface beneath the ringwork
enclosure will retain environmental evidence relating to the landscape in
which Castle Yard was constructed.