Bowl barrow on Nunwell Down known as The Devil's Punchbowl

A Scheduled Monument in Brading, Isle of Wight 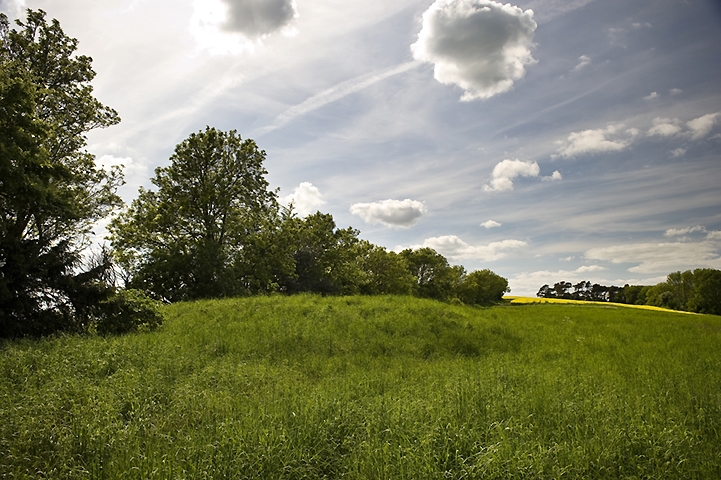 Entry Name: Bowl barrow on Nunwell Down known as The Devil's Punchbowl

The monument includes a bowl barrow just below the crest of a south east
facing hillside on the Isle of Wight.
The barrow has a mound which measures 18m in diameter and is c.1.4m high.
Surrounding the mound is a ditch from which material was quarried during its
construction. This has become partly infilled over the years but can still be
seen as a slight depression on the south side of the mound c.1.5m wide and
0.2m deep. The remainder will survive as a buried feature.
There is a central depression in the mound c.5m wide. This represents an
excavation conducted in the last century in which an interment was found. The
interment was that of a child in a contracted position. A hammer-head
perforated deer antler was also found in the barrow.
The post and wire fence on the north edge of the mound and the hedgerow fence
are excluded from the scheduling, but the ground beneath is included. The
hedgerow bank is included in the scheduling since it will contain material
from the substance of the barrow.

The bowl barrow on Nunwell Down survives well and is known from partial
excavation to contain archaeological remains and environmental evidence
relating to the barrow and the landscape in which it was constructed. This
barrow is the survivor of a pair of barrows on this part of Nunwell Down.