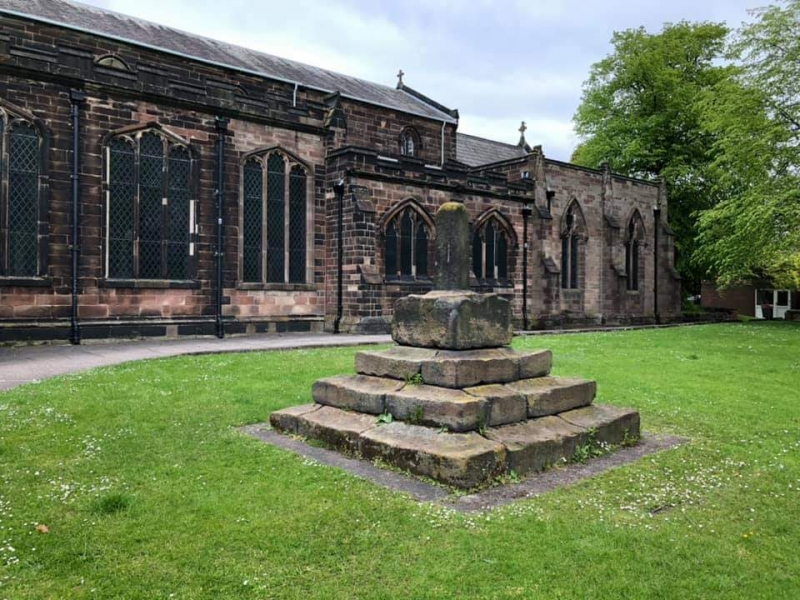 The monument includes a standing sandstone cross located in the churchyard of
St Luke's Church, Cannock, approximately 7m south east of the south porch.
The cross is Listed Grade II and is medieval in date with modern repairs. The
monument includes the base, consisting of three steps, a socket-stone and a
shaft.
The steps are square in plan and constructed of sandstone blocks. On the
uppermost step stands the socket-stone which is approximately 1m square in
section and stands to a height of 0.6m. The corners are chamfered and moulded
so that the top of the stone is roughly circular in section. Set into the
socket-stone is a 1m high stone shaft, of square section at the base with
chamfered corners tapering upwards. The surviving height of the cross is 2.6m.
The paving immediately surrounding the cross is excluded from the scheduling
although the ground beneath is included.

The churchyard cross at Cannock is a good example of a medieval standing cross
with a stepped base. The cross is believed to stand in or near to its original
position and limited activity in the area immediately surrounding it indicates
that archaeological deposits relating to the monument's construction in this
location are likely to survive intact. The cross has been little altered in
modern times and has continued in use as a public monument and amenity from
medieval times to the present day.