A Scheduled Monument in Perranzabuloe, Cornwall 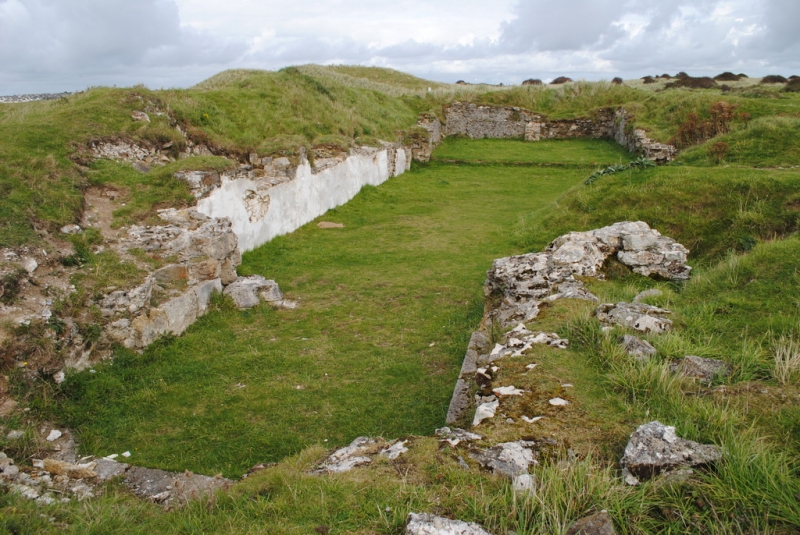 The monument includes the remains of the medieval St Piran's church - the
former parish church of Perranzabuloe, an early medieval wheel-head cross
standing 17m south of the church, and a sub-circular Christian enclosure
surrounding the church and cross. The monument is situated near the centre of
an extensive area of wind-blown sand dunes, Penhale Sands, filling most of
Perran Bay.
The walls of the medieval church survive as mortared slate rubble masonry to a
maximum height of 3m and 1m thick, with small traces of wall plaster adhering
to some parts of the wall's inner face. The surviving visible walls comprise
the N, E and S walls of the chancel and chancel-aisle to its S; the E, S and W
walls of a short south transept; parts of the N wall of the nave, and the S
wall of the tower incorporating its junctions with the tower W wall and with
the W end of the nave and nave-aisle. These walls give the total length of
the nave and chancel as 26m internally, and the total width at the chancel and
chancel-aisle as 8.5m internally. The interior of the tower extends for a
further 5m W of the nave. The bases of window splays survive in the chancel N
and E walls, and an acute, chamfered-arched recess for a piscina (a stone
basin with a drain used for disposal of water used at Mass) occurs near the E
end of the chancel-aisle S wall, the deposits within the church raising its
interior ground level to the base of the piscina arch. A partial excavation
of the interior of the church revealed a grave against the chancel E wall.
The visible masonry of the church is immediately surrounded externally by
large mounds of sand, with further irregular sand and rubble deposits present
at a lower level within the walls. These sand deposits mask most of the
exposed masonry's external face and it is considered from records of limited
excavations at the site that they also cover much of the church's remaining
ground plan not visible on the surface, together with other associated
features, including graves, both within and outside the church walls.
St Piran's Cross is an erect, granite high cross, 2.4m high, situated 17m S of
the church's chancel-aisle. It has a circular head, 0.6m diameter, whose
cross-arms were achieved by cutting ovoid perforations below the top and to
each side of the centre. A lower perforation was incompletely worked from
each face. The centre of the head has a small circular boss on each face.
The head is integral with the rectangular-section shaft, 0.5m by 0.4m at the
base and slightly tapered to a small collar at each side below the head. No
certain decoration survives on the badly weathered and lichen-encrusted shaft
surface.
No separate cross-base is visible though a base recorded by 19th century
observers probably occurs below the present sand surface level.
The church and cross are located near the centre of a sub-circular enclosure,
partly engulfed by a sand-dune in its NE quarter. It is defined by a bank,
0.5m high and 2m wide, extending from 27m NW of the church tower, to a maximum
53m N of the nave, then curving to 44m E of the chancel and terminating 37m S
of the chancel-aisle's SE corner. This break in the bank is marked to its
immediate S by two low irregular platforms separated by a shallow gully,
considered to mark structures associated with the main S entrance to the
enclosure. Beyond these, the course of the bank to the SW and W of the church
is continued by the curving upper edge of a scarp in the dunes. Subdivision
is evident within the enclosure, with a straight bank running NNW for 18m from
the enclosure-bank's SE sector, and a series of small incomplete banks in the
enclosed area W of the church.
The curvilinear ecclesiastical enclosure and the earliest recorded name for
the site, Lanpiran (Domesday Book, 1086), denote an early Christian
foundation. It is situated 0.35km ENE from another early Christian site, St
Piran's Oratory, whose functions may have been replaced by this monument
following an early engulfment by the shifting sand dunes of the area. The
cross has been identified with a boundary marker, called `Cristen-mael', in a
charter of A.D.960. By 1086, the Domesday Book reference describes the
monument as a Celtic monastery. Although later reduced to parish church
status, its shrine of St Piran remained a focus for pilgrimage. The visible
stone church remains are typical of a 12th-13th century cruciform church with
a south aisle and tower added in the 15th century. Problems with encroaching
wind-blown sand are first recorded in 1281, and petitions to move the church
to a safer location appear in 1704. A late 18th century painting shows the
monument with its intact church, engulfed to the level of its window sills,
together with the cross and a timber-framed, possibly jettied, building in the
position of the entrance platforms to the enclosure. In 1804, the church
fabric was extensively dismantled to provide material for the new
Perranzabuloe parish church built 4.5km inland at Lambourne. The remaining
church walls became totally buried by blown sand during the 19th century.
Much of the ground plan was cleared of sand, but not excavated to the former
floor levels, in 1917-1919. In 1964, part of the tower foundations were
revealed and limited excavations took place in the chancel interior.
The information sign and its posts, the M.O.D. Training Area warning signs
and their posts, and the modern heap of stones around the base of St Piran's
Cross are excluded from the scheduling, but the land beneath them is included.

The remains at this site demonstrate the continued use of an early Christian
foundation throughout the Middle Ages and down to the early 19th century.
During this extended period, the site remained in ecclesiastical use although
the nature of this activity changed through time.
The earliest religious activity on the site is indicated by the establishment
there of a `lann'. The place-name element `lann' means `enclosure', but it
was used from an early period to denote specifically religious enclosures.
This place-name occurs scattered throughout the South-West peninsula and Wales
indicating that it was related primarily to the Celtic church which dominated
these areas in the early Post-Roman period. Associated finds and structures
show that at least some `lanns' were established on pre-Christian sites. They
comprise curvilinear and sub-rectangular enclosures bounding a sacred
Christian area and containing a chapel, cemetery and associated housing for
their community. Lanns vary considerably in size and status, some appearing
as small local cemeteries with a single attendant priest, others developing a
parochial status to minister to the religious needs of the nearby secular
community, while some grew into Celtic monastic sites. They commonly occur in
sheltered valley bottoms, estuaries and near the coast, and though appearing
throughout Cornwall, their densest concentration equates with the more fertile
areas in the south of the county. As the earliest of religious foundations,
they are particularly important for the study of the introduction and
development of Christianity to western Britain, and provide a major source of
evidence for its social organisation and its relationship to contemporary
secular communities.
The `lann' site at St Piran's is important as a rare example of such a site
where remains of this early religious foundation can be demonstrated to
survive. This importance is enhanced by the close proximity and association
of the site, as indicated by the shared dedication to St Piran, with the
nearby Oratory, the latter being known to be one of the earliest Christian
foundations in Cornwall. Crosses and memorial stones of various types, some
marking burials, are a common feature of such early religious enclosures.
Standing crosses, like the example at this site, may have served a number of
functions, as memorial stones, as markers of sites considered especially
sacred, as preaching stations. This example survives in good condition and is
a member of a small number of similar crosses in Cornwall which together
indicate the existence there of an independent tradition in the SW peninsula
of the creation and use of such monuments. By the later 11th century, many
Cornish lanns had survived the demise of Celtic religious communities to
become the sites of parish churches and associated graveyards, that is,
buildings used for Christian worship by a secular community, containing a font
for Christian initiation and associated with a graveyard for burial in
consecrated land. Surviving medieval structures are commonly later than the
original foundation. Parish churches occur throughout England, with
variations in their distribution corresponding to differences in population
density and wealth during their two main periods of foundation. Details of
construction materials, form, size, layout and embellishment vary considerably
between regions. Although they are one of a range of surviving monuments from
the medieval and post-medieval periods, their particular importance derives
from their social standing as focal points for many aspects of communal and
individual expression, religious, artistic and technological, with
considerable implications relevant to the study of social organisation and
lay customs, rituals and beliefs. Throughout England around 18000 parish
churches are recorded, many of which are still in use. St Piran's however is
an example of a much smaller group of parish churches now abandoned and
surviving only as ruins. This abandonment means that the site was not
subjected to the extensive `renovation' and `rebuilding' works which occurred
during the 19th century at many parish churches, these works frequently
severely damaging remains of earlier periods of the churches' history. Hence
St Piran's will retain considerable remains of its early history and
development.
Together these various features make the St Piran's complex of considerable
importance for studies of the establishment and development of Christianity in
Cornwall during the Early Christian and medieval periods in the South-West.