A Scheduled Monument in Somerby, Leicestershire 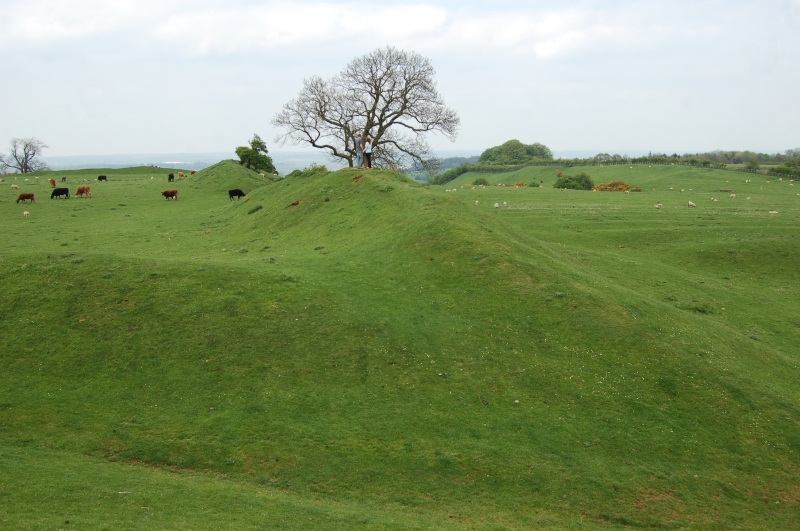 The monument at Burrough lies 7km south of Melton Mowbray and includes a large
Prehistoric hillfort situated on a prominent limestone hill. The land falls
away on every side except the east, producing an easily defended hillfort
location.

The hill is topped by an almost continuous rampart built of stone and covered
in turf. The rampart stands up to 2m high internally, enclosing a level
sub-rectangular area of about 5ha. An inturned entrance stands on the
south-east side and is formed by 2m high banks inturning for some 35m. A
second original entrance lies at the south-west corner where the rampart bank
continues outside the enclosure for some 50m. The rampart contains several
further breaks, some of which are the result of later activity. On the north
side there is a counterscarp bank 5-6m below the top of the rampart bank.
Excavations at Burrough Hill have revealed that the inturned gateway had a
cobbled road running through it and a stone guard-house on the south side with
post-holes indicating part of a gate structure. Pits have also been excavated
in which Iron Age and Roman pottery have been found. Finds from the site
indicate a long period of occupation ranging from the early Bronze Age
continuing well into the Roman period.

Excluded from the scheduling are a toposcope and stone approach steps in
the south-west corner and an ordnance survey pillar on the eastern side of
the site. The ground beneath these features is included. The site today has
free public access.

Large univallate hillforts are defined as fortified enclosures of varying
shape, ranging in size between 1ha and 10ha, located on hilltops and
surrounded by a single boundary comprising earthworks of massive proportions.
They date to the Iron Age period, most having been constructed and used
between the fourth century BC and the first century AD, although evidence for
earlier use is present at most sites. The size of the earthworks reflects the
ability of certain social groups to mobilise the labour necessary for works on
such a monumental scale, and their function may have had as much to do with
display as defence. Large univallate hillforts are also seen as centres of
redistribution, both for subsistence products and items produced by craftsmen.
The ramparts are of massive proportions except in locations where steepness of
slope precludes easy access. They can vary between 6m and 20m wide and may
survive to a height of 6m. The ditches can measure between 6m and 13m wide and
between 3m and 5m deep. Access to the interior is generally provided by one or
two entrances which often take the form of long passages formed by inturned
ramparts and originally closed by a gate located towards the inner end of the
passageway. The entrance may be flanked by guardrooms and/or accompanied by
outworks. Internal features often include round-houses as well as small
rectangular and square structures supported by four to six postholes and
interpreted as raised granaries. When excavated, the interior areas exhibit a
high density of features, including post- and stakeholes, gullies, floors,
pits, hearths and roads. Large univallate hillforts are rare with between 50
and 100 examples recorded nationally. Most are located within southern England
where they occur on the chalklands of Wessex, Sussex and Kent. The western
edge of the distribution is marked by scattered examples in north Somerset and
east Devon, while further examples occur in central and western England and
outliers further north. Within this distribution considerable regional
variation is apparent, both in their size, rampart structure and the presence
or absence of individual components. In view of the rarity of large
univallate hillforts and their importance in understanding the organisation
and regional structure of Iron Age society, all examples with surviving
archaeological potential are believed to be of national importance.

Burrough Hill is the finest example of a large univallate hillfort in
Leicestershire and has a long period of occupation proved by excavation. It
retains a complete circuit of ramparts and a well preserved inturned entrance.