A Scheduled Monument in Tidcombe and Fosbury, Wiltshire 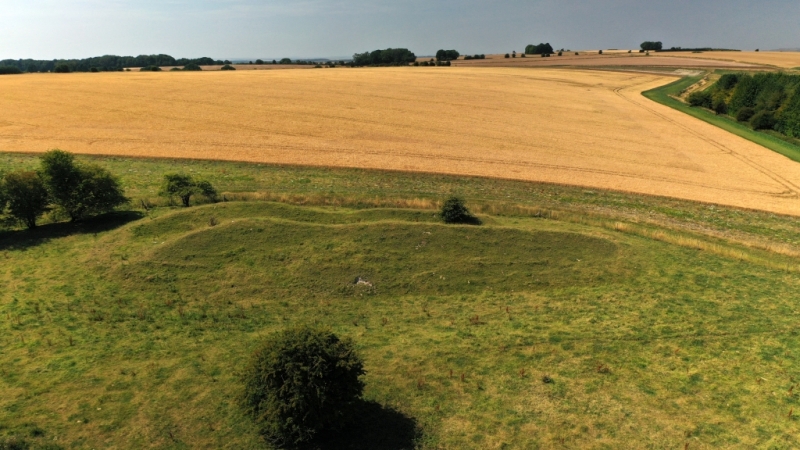 The monument includes a long barrow set on the crest of a NW-facing slope in
an area of undulating chalk downland. It survives as a substantial
earthwork, broadly rectangular in plan and orientated north-south. The
barrow mound is 54m long, 24m wide and varies in height between 3m at the
north end and 4m at the chambered south end. The chamber has been partly
excavated and consequently appears as a hollowed area containing four large
sarsen blocks. A further hollow runs the length of the mound along the top
of the monument. This may represent the earliest disturbance of the site
which is believed to have been in the 18th century. Flanking the mound are
ditches, from which material was quarried during the construction of the
monument. These run parallel to the east and west sides of the mound. The
eastern ditch survives to 8m wide and 0.5m deep. The western ditch has been
largely infilled over the years but can still be traced on the surface as a
low earthwork.

The 180 long barrows of Hampshire, Wiltshire and Dorset form the densest and
one of the most significant concentrations of monuments of this type in the
country. The barrow south of Tidcombe is important as, despite partial
excavation in the 18th century, much of the monument survives comparatively
well and has potential for the recovery of archaeological evidence for
nature and duration of use of the monument and the environment within which
it was constructed. The importance of the monument is enhanced by the fact
that several other long barrows and additional evidence for contemporary
settlement survive in the area. This illustrates the intensity with which
this part of east Wiltshire was settled during the Neolithic period.