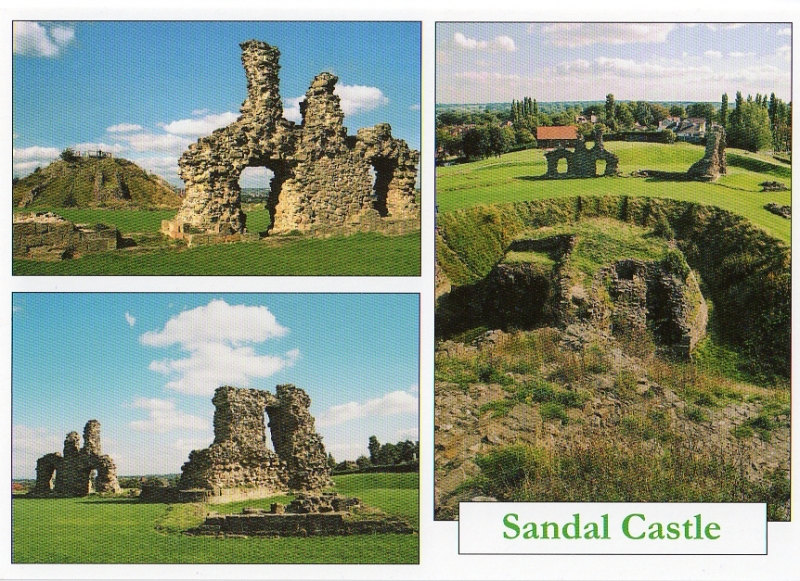 Sandal Castle is located on high ground overlooking the Sandal area of
Wakefield and the River Calder. The monument includes the standing remains of
the thirteenth century shell keep castle and the earthworks of the earlier
motte and bailey castle.
The main earthworks comprise a substantial motte, c.15m high and with a base
diameter of c.40m, and a crescent shaped inner bailey measuring c.60m by 25m.
The bailey is separated from the motte by a deep ditch which also encircles
both features and measures c.15m wide and 5m deep. The ditch is enclosed by a
substantial counterscarp bank and is broken on the east side by a modern
causeway which gives access to the bailey alongside the surviving medieval
stonework of the bridge and gate. Extensive outworks exist to the south-east
and represent a Civil War defensive hornwork of copybook pattern.
The earliest castle buildings were of timber and were replaced in stone during
the thirteenth century. Excavation of the interior carried out between 1964
and 1973 has revealed a number of timber buildings including a square, timber-
framed kitchen and an aisled hall or residence. The original wooden tower on
the motte was rebuilt as a stone shell keep with circular towers. This would
have contained service and garrison buildings and would have had a wall-walk
lining the interior. The base of the keep can still be seen along with the
foundations, on the south-east side of the motte, of two round towers believed
to have guarded the drawbridge between the keep and the barbican. The
barbican, whose lower courses are still upstanding, was built on an island of
rock in the ditch between the motte and the bailey and is flanked by defensive
walls which cross the ditch. In the bailey are the foundations of service
buildings and upstanding fragments of walling from the Great Hall and lodgings
chambers set upon pillared undercrofts. The bailey also contains a well.
Sandal Castle is a Listed Building Grade II*.
The castle was first mentioned in c.l240 and was held by the Warennes, earls
of Surrey. It stands approximately one mile south-east of Low Hill motte and
bailey castle, on the opposite side of the River Calder. Although the precise
relationship between the two castles is not yet known, it is likely that they
were originally built to command the river valley together. Sandal Castle may
have been attacked in 1317, and, in 1460, the area to the north was the site
of the battle of Wakefield fought between the forces of Queen Margaret and the
Duke of York. Richard III made this his chief stronghold in the north, adding
the polygonal tower to the keep and providing a new bakehouse; the walls of
both buildings are still visible. It was slighted between 1645 and 1648
following a seige after which it appears to have been systematically quarried
for its stone. A number of features are excluded from the scheduling. These
include the surfaces of the carpark and paths, an electricity junction box,
all modern walling and fencing, benches, safety grilles and wastebins. The
ground beneath these features is, however, included.

Motte castles are medieval fortifications introduced into Britain by the
Normans. They comprised a large conical mound of earth or rubble, the motte,
surmounted by a palisade and a stone or timber tower. In a majority of
examples, an embanked enclosure containing additional buildings, the bailey,
adjoined the motte. Motte castles and motte and bailey castles acted as
garrison forts during offensive military operations, as strongholds, and, in
many cases, as aristocratic residences and centres of local or royal
administration. Between the Conquest and the mid-thirteenth century, usually
during the twelfth century, a number of motte and bailey castles and ringworks
were remodelled in stone. In the case of mottes, the timber palisade
surrounding the top of the motte mound was replaced by a thick stone wall to
form a `shell keep'. If the tower on the motte was of timber, this may also
have been replaced in stone and, if a bailey was present, its ramparts were
often strengthened with a curtain wall. Within the keep, buildings for
domestic or garrison purposes were often constructed against the inside of the
keep wall. Although over 600 motte castles or motte and bailey castles are
recorded nationally, examples converted into shell keeps are rare with only 60
sites known to have been remodelled in this way. As such, and as one of a
restricted range of recognised early post-Conquest monuments, they are
particularly important for the study of Norman Britain and the development of
the feudal system. Sandal Castle is a well-preserved example of a substantial
motte and bailey castle which was of sufficient strategic importance to be
refortified in stone and became a shell keep castle. The high quality of the
stonework now exposed attests to the castle building skills of the baronial
owners (earls of Surrey and then the dukes of York). It was repaired and
improved by its royal owners from Edward IV in 1460 to Elizabeth in 1566.