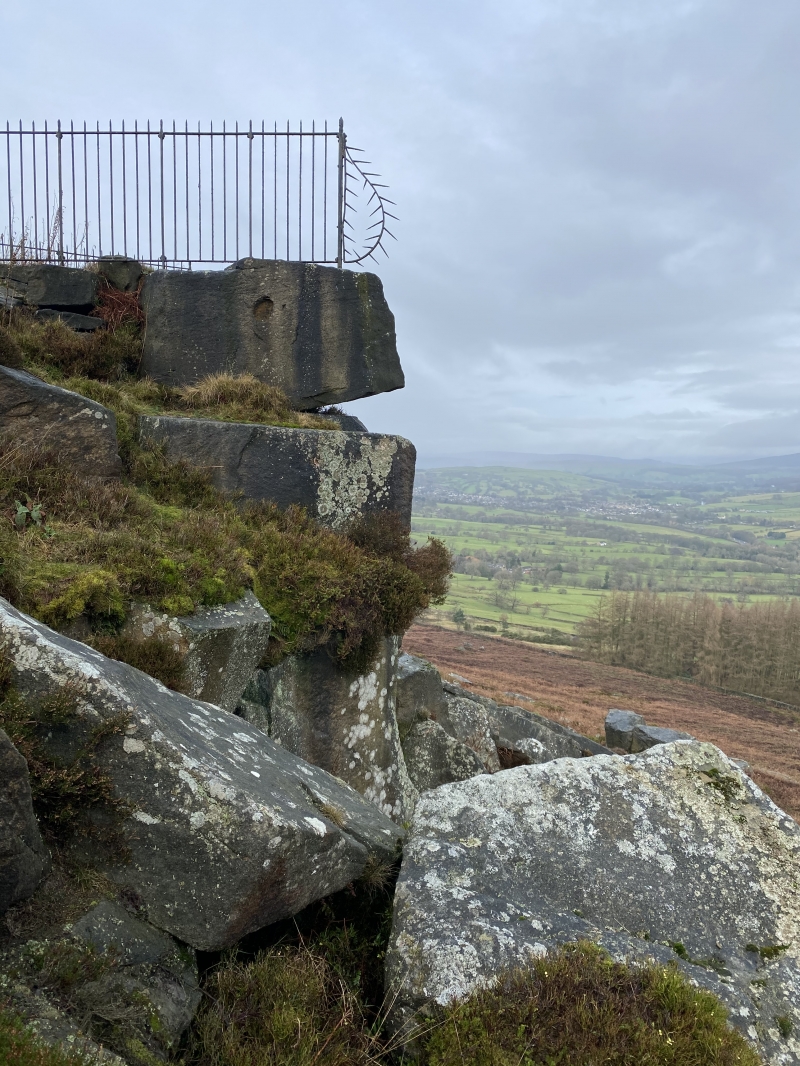 The monument includes a carved gritstone outcrop, 7m x 3m. It is situated
north of the path from Ilkley to Woodhouse Crag and beyond. The rock is
enclosed by an iron railing on three sides, the fourth side being an open
vertical face.
The carving consists of a curvilinear carved figure of Swastika shape with ten
cups fitted into the five curved arms, and eight other cups on the east side.
The additional carving on a smaller piece of rock is a copy made this century.
The surrounding railing is not included in the scheduling.

Rombalds Moor is an eastern outlier of the main Pennine range lying between
the valleys of the Wharfe and the Aire. The bulk of this area of 90 sq km of
rough moorland lies over 200m above sea level. The moor is particularly rich
in remains of prehistoric activity. The most numerous relics are the rock
carvings which can be found on many of the boulders and outcrops scattered
across the moor. Burial monuments, stone circles and a range of enclosed
settlements are also known.
Prehistoric rock carving is found on rock outcrops in several parts of upland
Britain with one of the densest concentrations on Rombalds Moor. The most
common form of decoration is the `cup and ring' mark in which expanses of
small cup-like hollows, which may be surrounded by one or more `rings', are
pecked into the surface of the rock. Other shapes and patterns, including some
dominated by grooves or lines, are also known. Carvings may occur singly or in
small groups, or may cover extensive areas of rock surface. They are believed
to date to the Late Neolithic and Bronze Age periods (c.2800-500 BC) and
provide one of our most important insights into prehistoric `art'. The exact
meaning of the designs remains unknown, but they have been interpreted as
sacred or religious symbols. Frequently they are found close to contemporary
burial monuments. All positively identified prehistoric rock carving sites
exhibiting a significant group of designs have been identified as nationally
important.

The carvings on this rock survive well, their form being unique, and it will
contribute to an understanding of the wider grouping of carved rocks.