A Scheduled Monument in Wortley, Barnsley 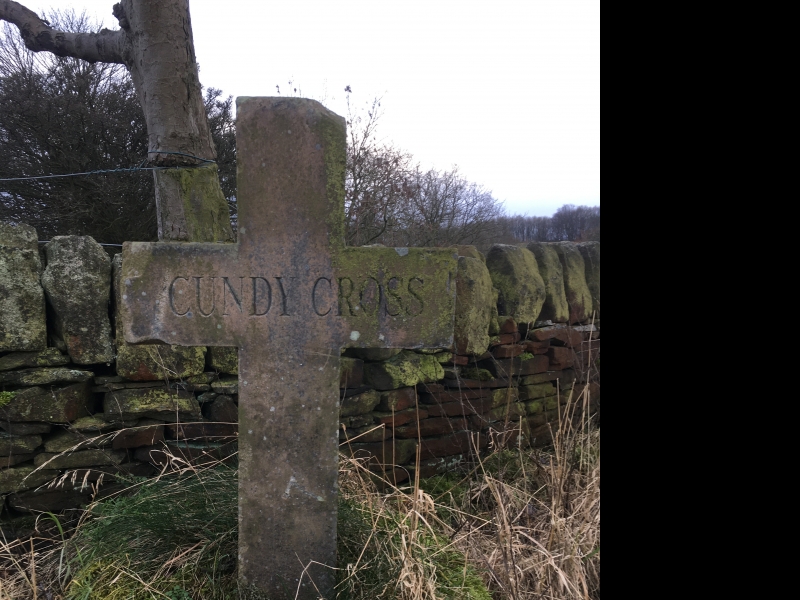 The monument is the remains of a wayside cross and includes the socle or
socket stone of the cross. Originally there would also have been a shaft and
cross head but these components are now missing.
The socle is a dressed sandstone block measuring approximately 70cm square by
70cm high. In the top is a rectangular socket hole measuring 20cm by 16cm by
10cm deep. On the north side, a channel leads from the edge of the socle to
the socket hole. The purpose of this channel is unclear but it may have been
used to run lead round the base of the cross shaft. In addition, there are
circular holes on either side of the channel but the function of these is also
unclear. The cross is called the Cundy Cross after the curate Edward Cundy who
died in 1623. It is likely to be earlier than this date, however, and is
probably medieval in origin. It stands at the junction of Wortley Bank,
Woodhead Road and a track leading north west from the crossroads in the
direction of Finkle Street. It may originally have stood at the centre of the
crossroads or may, alternatively, be in its original location since it is
deeply embedded in the surrounding grass bank. The monument is also Listed
Grade II.

Although missing its cross shaft and head, the Cundy Cross is a good example
of a probable medieval wayside cross associated with an ancient crossroads.