A Scheduled Monument in Melbourn, Cambridgeshire 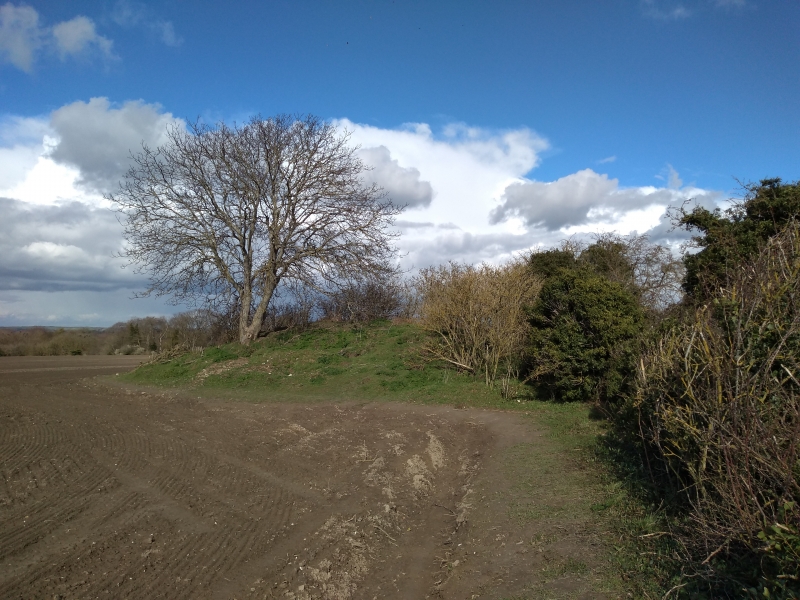 The monument includes a bowl barrow situated in a prominent position on the
northern facing slope of the chalk hills, some 250m to the south of the
Royston Road (formerly the A10). The barrow mound measures 18m east to west
and 22m north to south, and survives to approximately 3m in height. The mound
is thought to have originally been circular in plan, however the profile of
the north eastern side shows evidence of later truncation which has removed
approximately 4m from the width. The steep sloping sides of the mound descend
from a small level area on the summit measuring approximately 8m in diameter.
The barrow, which is apparently unexcavated, forms part of a wider group of
similar monuments which extend across the eastern fringe of the Chiltern Hills
to the north and west of Royston. Many of the more conspicuous barrows were
investigated in the 19th century, including examples at Heath Farm, 2km to the
south, and Therfield Heath, 4km to the south west, and found to contain
archaeological remains dating to the Bronze Age.

Despite some disturbance caused by the alteration of the north eastern side of
the mound, the bowl barrow known as Grinnel Hill is very well preserved. The
mound stands to approximately its full height, in marked contrast to the
majority of barrows within Cambridgeshire which are now only visible on aerial
photographs. There is no evidence that the barrow has ever been excavated and
archaeological remains (including burials) within the mound will remain
undisturbed affording valuable insights into early burial practice. The former
ground surface, buried beneath the mound, will provide information concerning
the landscape in which it was constructed.
The importance of the monument is enhanced by its association with a wider
group of similar monuments, including the remains of another bowl barrow
situated some 40m to the NNW (the subject of a separate scheduling).
Comparisons between these sites will provide valuable information concerning
the variation and development of prehistoric burial practices.