A Scheduled Monument in Burton Agnes, East Riding of Yorkshire 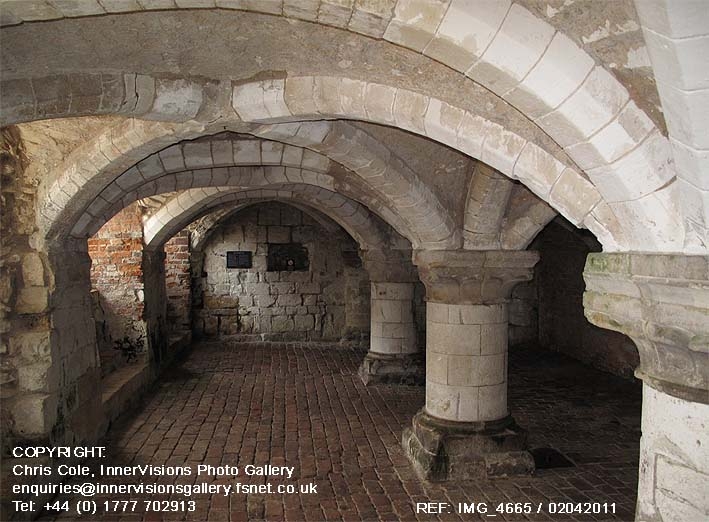 The 12th-century manor house at Burton Agnes is a late Norman first-floor hall
with an upper storey and vaulted undercroft which show evidence of alterations
dating to the 15th, 17th and 18th centuries. The monument includes the hall
and also the ruinous post-medieval wing added onto the north-west side to
house the 12th-century well and later tread-wheel. Trial excavations carried
out in 1984 by English Heritage's Central Excavation Unit revealed that
extensive buried remains relating to the manor house in both its medieval and
post-medieval phases survive well and in situ, both in the yard enclosed by
the standing remains and also beneath the brick floor of the undercroft. Other
medieval manorial remains are likely to survive outside the undercroft. Other
medieval manorial remains are likely to survive outside the area of the
scheduling but their nature and extent are not sufficiently well understood at
this time for them to be included in the scheduling.
The ground-floor undercroft is a rectangular stone-built structure measuring
12.34m by 6.02m, the long sides being orientated north-west and south-east.
Running centrally along its length is an arcade of five cylindrical piers with
water-leaf capitals which divide the room into four two-part bays with a
restored vaulted roof above. The two end piers are set into the short walls
and the westernmost has a Nine Men's Morris board carved into it. Next to
this, set into the short south-west wall on the south side, is a locker while,
on the north side, an original newel stair gives access to the first floor
hall and is flanked by two blocked post-medieval doorways let into the north-
west hall. Adjacent to these is a restored 12th-century loop window. North of
this window the vaulting in the north bay is a reconstruction, the original
having been destroyed in the 18th century to make way for a flight of stairs
that has since been removed. The original entrance into the undercroft is
still extant in a remodelled form in the south-east wall, as are parts of the
jambs and sills of three additional loop windows which were converted to sash-
windows in the 18th century when the hall was used as a laundry. Two blocked
openings in the short north-east wall would also have been windows though one
was enlarged in the 18th century to make a doorway leading to the stairs noted
above. The current floor of hand-made brick is 17th or 18th-century and
overlies the rammed chalk floor of the medieval period.
The first floor hall measures 13.64m by 6.86m and, in its present form, dates
to the 15th century when the 12th-century walls were heightened and the
present king-post roof erected. It was probably at this time or later that the
doorway into the hall through the north-west wall was blocked. This doorway,
situated next to the newel stair, was originally reached via an external stair
leading from the yard outside and would have been the main access. A 12th-
century window in the west wall was also replaced in the mid-15th century, as
can be seen by elements of tracery which survived the creation of a doorway in
the 17th century. An original loop window also survives in this wall, its
function being to light the newel stair which formerly carried on to the roof
which, prior to the 15th century, may have been crenellated. The rest of the
first-floor alterations date to the 18th century when the windows were
remoulded and an extra tier was let in to light an additional floor which has
since been removed. During this period the medieval fireplace was enlarged and
new fireplaces and flues were added to cater for the laundry. In addition, the
north-east wall was either rebuilt or cased inside and out with brick and four
new sash windows were let into it. A graffito on this wall reads 'ST 1712' and
is believed to date the period of rebuilding.
In addition to the north-east wall, the exterior face of the south-east wall
was also cased in brick during the 18th century. This remodelling was mainly
cosmetic and was carried out in order to make the manor house blend in with
the early 17th-century 'New Hall' which had been built adjacent. The exact
date of the post-medieval extension is not known, though the windows of the
tread-wheel shed appear to be 17th-century. The small-scale excavations
carried out against the walls of the hall have partially uncovered a number of
medieval and post-medieval features including drains, stairways and foundation
trenches, and also garden soils predating the building of the hall. Elsewhere
in the area of the extension, the buried foundations of medieval service
buildings will survive and will include, for example, the kitchen, a brewhouse
and a bakehouse.
The manor house was probably built between 1170 and 1180 by Roger de
Stuteville. Through Roger's daughter Alice it passed to the de Merlay family
and then, in 1274, to the de Somervilles. In 1355, again by marriage, it
passed to the Griffiths and it was probably Sir Walter Griffith who carried
out the alterations in the 15th century. His descendant, Sir Henry Griffith,
built the new hall between 1601 and 1610 after which the manor house was used
first as servants' quarters, then as a laundry. In 1654 the estate passed to
the Boyntons who hold it to the present day. The manor house has been in State
care since 1948 and is also a Grade I Listed Building.
Excluded from the scheduling are all fixtures such as grilles, interpretation
boards and signs, the surface of the yard and the donkey-pen and stable but
the ground beneath all these features is included.

Burton Agnes manor house is a rare and well preserved example of a 12th-
century first-floor hall which retains many of its original architectural
features. In addition to the hall itself and the remains of the adjacent
post-medieval wing, trial excavation has revealed that buried features
relating to all periods of use survive well. Although too limited in scale to
provide a complete picture, the excavations indicate that further manorial
remains will survive extensively throughout the site.