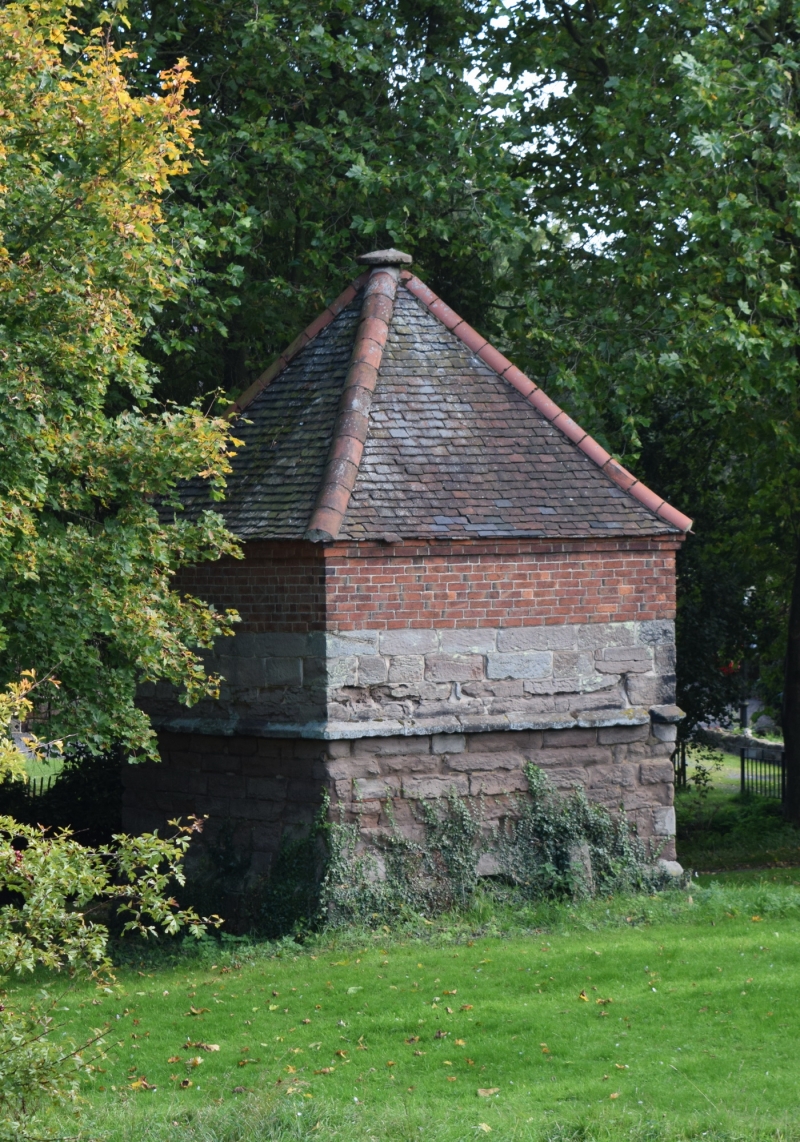 The site is situated along the south side of Mawby's Lane within the village
of Appleby Magna. It includes a moated site, two fishponds, settlement
remains and formal garden earthworks.
The site extends for a total of 240m eastwards from St Michael's churchyard
wall and is a maximum of 100m north-south. In the centre of this area is the
moated site which formerly contained the medieval manor house of the Appleby
family and which was the subject of a small excavation in 1960. George
Appleby sold the ancestral manor in 1560 and the present half-timbered house,
standing adjacent to the medieval house site, was built soon afterwards. Also
surviving on the moated island is a 15th-century gatehouse of two stories with
a central arch. The gatehouse is now joined to the 16th-century house by a
19th-century passage, forming a single private dwelling (Listed Grade II*).
The square water-filled moat surrounding the house, which was fed by a north-
flowing stream situated on its west side, measures 60m x 60m. The central
sector of the west arm of the moat is infilled to form a modern causeway on
the site of the original access. The moat arms are an average of 12m wide and
over 3m deep.
To the south of the moated site is a dry fishpond, measuring 10m x 25m and
approximately 1.5m deep, which was also fed by the stream. The earthworks of
a second horseshoe-shaped pond (now dry) are situated on the west side of the
site. The pond originally measured approximately 30m x 50m and 1.5m deep but
the eastern part has been modified to form a modern entrance drive. This pond
was constructed to provide a head of water for a watermill situated on the
platform now occupied by the Post Office (which is not included in the
scheduling). To the south of the fishpond is a 16th or 17th-century square
plan dovecote which is Listed Grade II. South of this are the slight
earthworks representing a tithe barn, the superstructure of which was
dismantled in the early 20th century.
On the far east side of the site is a small paddock known as the "bull ring"
which contains earthworks representing the sites of village houses considered
to be contemporary with the moated site. These are the visible remains of the
medieval village which extended to the north and has subsequently been built
over. A narrow hollow way, approximately 5m wide, leads off from this area to
the south. Vestiges of medieval ridge and furrow ploughing are situated
between the hollow way and the moat to the west with a headland bank, which
has a maximum height of 1m, lying parallel to the hollow way. This is the
only surviving part of the field system which has been modified by modern
development to the south.
Later occupation of the site is represented by an area of 16th or 17th-century
formal gardens, set into medieval ridge and furrow ploughing, to the east of
the moat. The area measures 50m x 60m overall and consists of a series of low
banks dividing the area into four parts.
Excluded from the scheduling are the gatehouse and adjoining house on the moat
island which are Listed Grade II*, the dovecote, Listed Grade II, all modern
buildings and hard surfaces but the ground beneath all these features is
included.

The site east of St Michael's Church is an example of a moated site in
excellent condition which retains important early buildings intact; the 15th-
century gatehouse is unique in the county. The moat island also retains
below-ground remains of a manor house. In addition, the monument contains
parts of the once more extensive field system and adjoining village remains
which illustrate the complex relationships between such moated sites and their
associated settlements. The changes in such relationships are demonstrated
here by the conversion of part of the settlement site and field system into
formal gardens in the early post-medieval period.

Books and journals
Hartley, R F, The Medieval Earthworks of North-West Leicestershire, (1984)
Pevsner, N, Williamson, E, The Buildings of England: Leicestershire and Rutland, (1984)
Other
The Landowner,