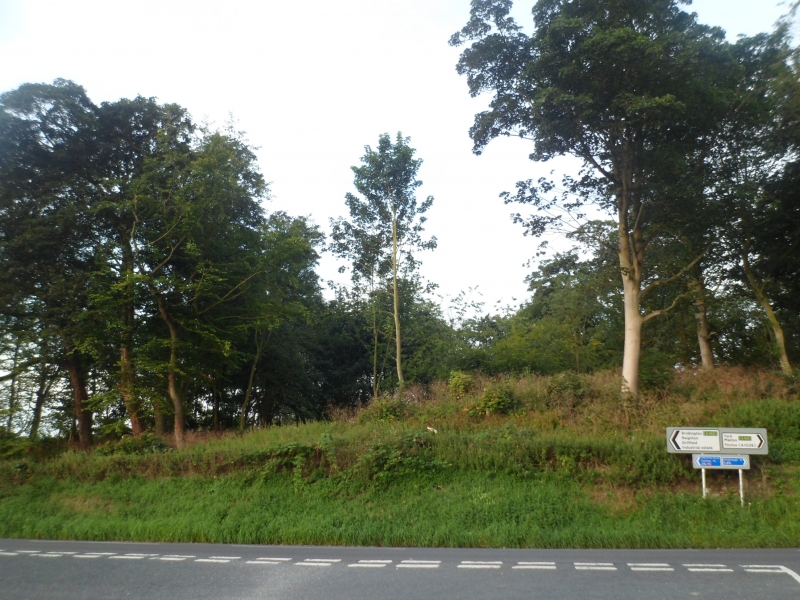 The monument includes the motte and the undeveloped part of the bailey of the
Norman castle at Hunmanby. The village of Hunmanby lies on the western scarp
of the Wolds and the castle is situated on Castle Hill, a slight promontory
overlooking the village, 100m west of the 11th century All Saints' Church.
The monument also lies in the grounds of Hunmanby Hall, a 17th century house
later converted into a school for girls and subsequently extended by major new
building in the early 1900s.
The motte occupies the highest point on Castle Hill, a natural knoll which
provided an easily defended site requiring little modification. A ditch, 10m
wide and 3m deep, defines the western edge of the motte, providing an
additional fortification against attack from the high ground to the west. The
ditch once surrounded the motte and, although to the south and east it has
become infilled over the years or altered by garden landscaping so that it is
no longer visible as an earthwork, it will survive as a buried feature. To
the north the motte is bounded by the steep scarp of the road embankment. The
motte is estimated to be 60m in diameter and the top is about 4m above the
surrounding land surface. A recent study of historical documents and aerial
photographic records has identified the original extent of the bailey and,
although the southern part of the bailey has been altered by terracing
associated with modern buildings, the northern portion remains undeveloped.
This portion, estimated to be one quarter of the original area of the bailey,
measures 220m east-west by 100m north-south. The northern edge of the bailey
is defined by the modern road, Castle Hill or Ratten Row, which runs in a 5m
deep cutting down into the town centre.
Hunmanby Castle was built by Guilbert de Gant. In the 14th century, the site
of the motte is referred to as 'Castlegarth', while a field containing the
bailey is called 'Erlesing'. The castle, together with a large area of land
to the west of the village, was emparked in the 18th century.
All fences, upstanding walls and the surfaces of paths are excluded from the
scheduling although the ground beneath these items is included. The terrace
walls retaining the archaeological deposits and the ground beneath them are
included in the scheduling.

Although the motte has been altered by post-medieval landscaping associated
with Hunmanby Hall and the southern part of the bailey has been lost beneath
successive phases of school buildings, the whole of the motte and the northern
part of the bailey remain undeveloped. Foundations of medieval buildings will
survive, on and around the motte.