A Scheduled Monument in St John's Castlerigg and Wythburn, Cumbria 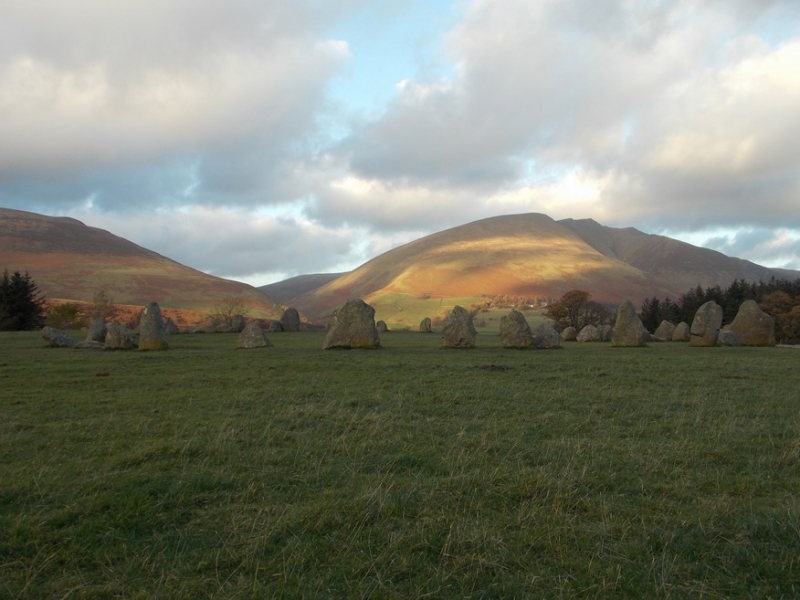 Church of England Parish: St John's in the Vale and Wythburn

The monument is Castlerigg stone circle. It is located on a plateau of the
north-easterly projecting spur of Castlerigg Fell and is divided into two
separate areas. The monument includes an oval enclosure of stones which
contains a smaller enclosure and two barrows, and an outlying stone. The oval
enclosure includes 38 large stones, some standing up to 3m high and some
fallen, and 3 smaller stones; it encloses an area measuring approximately 32m
north-south by 29m east-west. There is an entrance between the two tallest
stones on the northern side. Within the eastern side of the circle, abutting
the internal face of three stones forming part of the circle, is a rectangular
structure of 10 stones measuring c.7.6m by 3.6m internally. Within the south
western side of the circle is a low bank up to 0.1m high which runs in an arc
adjacent to the stones for a distance of about 8m. In the north-eastern and
north-western quadrants of the circle are two barrows, both approximately 3.5m
diameter by 0.05m high and each surrounded by a shallow ditch 0.6m wide by
0.05m deep. An earthen bank up to 7m wide and 0.3m high flanks the northern
side of the circle. 70m west-south-west of the circle, and in a separate
area, is a stone outlier located adjacent to the field boundary.
Limited antiquarian investigation of the rectangular structure within the
circle found charcoal, black soil mixed with stone, and a 'dark, unctuous sort
of earth' near the bottom of the excavation.
The stone circle was taken into State care in 1883.

Stone circles are prehistoric monuments comprising one or more circles of
upright or recumbent stones. The circle of stones may be surrounded by
earthwork features such as enclosing banks and ditches. Single upright stones
may be found within the circle or outside it and avenues of stones radiating
out from the circle occur at some sites. Burial cairns may also be found close
to and on occasion within the circle. Stone circles are found throughout
England although they are concentrated in western areas, with particular
clusters in upland areas such as Bodmin and Dartmoor in the south-west and the
Lake District and the rest of Cumbria in the north-west. This distribution may
be more a reflection of present survival rather than an original pattern.
Where excavated they have been found to date from the Late Neolithic to the
Middle Bronze Age (c.2400-1000 BC). It is clear that they were designed and
laid out carefully, frequently exhibiting very regularly spaced stones, the
heights of which also appear to have been of some importance. We do not fully
understand the uses for which these monuments were originally constructed but
it is clear that they had considerable ritual importance for the societies
that used them. In many instances excavation has indicated that they provided
a focus for burials and the rituals that accompanied interment of the dead.
Some circles appear to have had a calendrical function, helping mark the
passage of time and seasons, this being indicated by the careful alignment of
stones to mark important solar or lunar events such as sunrise or sunset at
midsummer or midwinter. At other sites the spacing of individual circles
throughout the landscape has led to a suggestion that each one provided some
form of tribal gathering point for a specific social group. Large irregular
stone circles comprise a ring of at least 20 stone uprights. The diameters of
surviving examples range between 20 and 40 metres, although it is known that
larger examples, now destroyed, formerly existed. The stone uprights of this
type of circle tend to be more closely spaced than in other types of circle
and the height and positioning of uprights also appears not to have been as
important. They are widely distributed throughout England although in the
south they are confined largely to the west. Of the 250 or so stone circles
identified in England only 45 examples of large irregular circles are known.
As a rare monument type which provides an important insight into prehistoric
ritual activity all surviving examples are worthy of preservation.

Castlerigg stone circle remains unencumbered by modern development and is one
of the finest examples of a large irregular stone circle in England.