Boddington Camp: a slight univallate hillfort on the summit of Boddington Hill

A Scheduled Monument in Wendover, Buckinghamshire 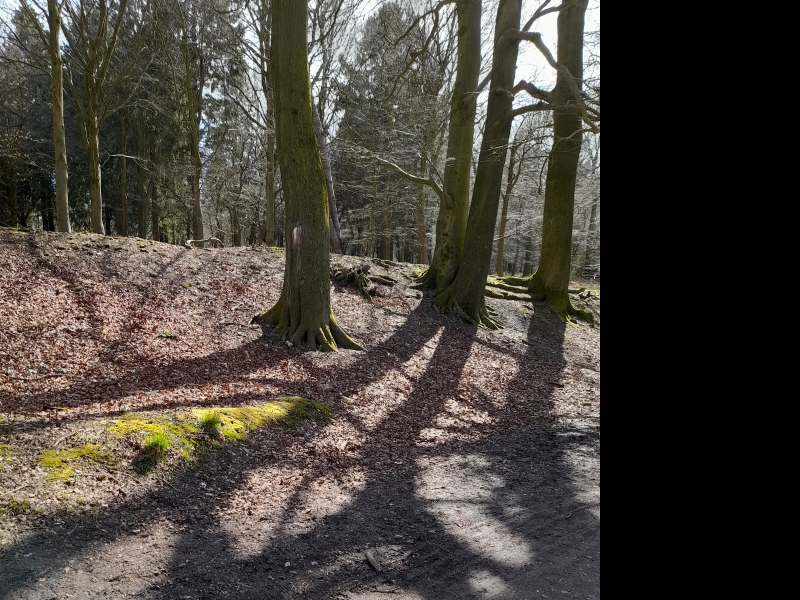 The monument includes a univallate hillfort occupying the summit of a steep
sided chalk spur. The hillfort is oval in shape, measuring overall some 500m
long by 220m wide, and has an internal area of some 6ha. It lies with its long
axis along the hilltop orientated north-east to south-west. The defences run
roughly around the 240m contour and comprise a single rampart and outer ditch.
The defences are strongest around the south and east where the outer ditch is
up to 1.6m deep and the outer scarp of the rampart up to 3.4m above the ditch
bottom on its outer side and 1.7m high on its inner side. In places along this
south-east side there are the remains of an outer or counterscarp bank which
runs along the edge of the ditch; this averages 5m wide and 0.4m high.
The defences become confused towards the north-east end of the hillfort as
the result of later quarrying but their course can still be followed except
where they have been destroyed in the northern corner of the enclosure. This
position is almost certainly the site of the original hillfort entrance but
today nothing of this can be recognised. This northern part has suffered
considerable disturbance from occupation of the site by Calloway or Peacock
Farm which stood in this vicinity until its demolition in the 1950s. Surface
irregularities, along with tile and brick waste scattered on the surface here,
relate to this phase of occupation.
Around the north-western side of the hillfort the outer ditch has been
overlain by a modern terraced forestry track. However the main rampart
survives as a single well defined scarp averaging 2.6m high. Some 200m south
along its length the rampart becomes stronger rising to an average height of
3.6m and an inner bank once more becomes recognisable, averaging 0.6m high. A
modern entrance gap 5m wide has been cut through the rampart some 30m south of
the commencement of this inner bank. The last 120m of this length of the
rampart has an inner ditch 5m wide and 0.8m deep which probably served as the
quarry for the inner bank. The outer ditch remains buried beneath the modern
forestry track throughout the complete length of this western side. At the
extreme south-western corner of the hillfort the outer rampart is lowered to
form an entrance ramp which could be a second original approach to the
interior of the fort. There is no outer ditch at this position, the ditch
commencing some 40m to the east. Whether the ditch was originally intended to
end short of this ramp or whether it has been subsequently infilled is
unclear.
The interior of the hillfort is today heavily afforested. Finds from the
interior of the fort have in the past included fragments of Iron Age pottery,
an ingot, part of a bronze dagger, a flint scraper and a spindle whorl. A
section excavated through the rampart in the area of the southern entrance
revealed fragments of pottery indicating occupation of the site during the
1st-2nd centuries BC. A series of lesser modern banks associated with the
modern farm enclosure can be identified running inside and parallel to the
prehistoric earthworks. A large circular concrete reservoir 33m in diameter
lies approximately central to the site.
The concrete reservoir, along with all modern boundary features, structures
and metalled surfaces are excluded from the scheduling, although the ground
beneath these is included.

The slight univallate hillfort on Boddington Hill survives well despite some
evidence of disturbance and is a good example of its class. The interior,
although heavily afforested, has been demonstrated as containing
archaeological evidence relating to the occupation of the site. Similarly, the
perimeter defences will contain archaeological evidence both of the structure
of the original defences and of the date of occupation. The latter has been
demonstrated by finds of diagnostic material from a section cut across the
defences in the south-west corner of the site. It is also likely that
environmental evidence relating to the landscape in which the monument was
constructed and to the economy of its inhabitants will survive in the ditch
fills and sealed beneath the various banks.

Other
Conversation owners,
NAR Card no 1645,