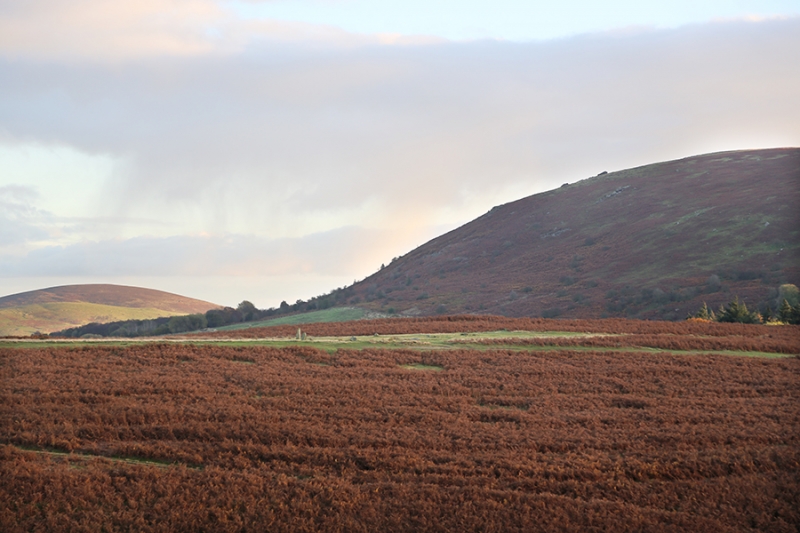 The monument includes Mitchell's Fold stone circle (also known as Medjices
Fold and Madges Pinfold) an outlier standing stone, a cairn base, portions of
two field banks and a sample area of ridge and furrow. The circle is situated
in a high saddle between Stapeley Hill to the north and Corndon Hill to the
south with spectacular views to the west. It comprises 15 stones arranged to
form a rough circle with dimensions of 30m north west to south east by 27m
north east to south west. The stones are believed to have been brought from
Stapely Hill to the north west and are of a uniform geology. The majority
protrude through the turf to an average height of 0.4m; two stones lie
recumbent while three stones are appreciably taller than the rest standing to
heights of 0.9m, 1.4m and 1.7m. Probing with an auger suggests that there may
be a central stone in situ below the turf. The circle lies on the line of the
south west to north east ridgeway which follows the spine of Stapeley Hill and
is said to represent the old coach route from Shrewsbury to Aberystwyth.
Turfed-over linear striations which cross the interior of the circle on this
alignment may represent old cart or coach ruts.

To the south east of the circle, 90m from its centre, an outlying standing
stone is set on a small prominence. The stone stands 0.7m high. To the
immediate north east of the outlier is a low mound believed to be the base of
a robbed cairn; it is roughly circular in plan with a diameter of 20m and a
height of 0.6m. Several stones protrude through the turf and two depressions
3m apart may represent past explorations. The eastern depression has a close
setting of four stones in it and a horseshoe-shaped spoil mound on its
downslope (east) side. The western depression is edged with spoil on all
sides. To the north west of the circle a linear bank 1.4m wide and 0.4m high
runs south west to north east across the moorland. A similar bank 1m wide and
0.2m high approaches the circle from the south east to stop immediately short
of its north west side. These banks represent part of an extensive abandoned
field system which surrounds the circle. Vestigial ridge and furrow associated
with this system, and with an average width between ridges of 3m, can be
recognised to the immediate north east of the circle. The area between the
stone circle and the cairn is included within the scheduling as it contains a
representative sample of these features and is likely to contain buried
remains associated with the circle, standing stone and cairn.

The English Heritage interpretative board to the south of the circle is
excluded from the scheduling, although the ground beneath is included.

Stone circles are prehistoric monuments comprising one or more circles of
upright or recumbent stones. The circle of stones may be surrounded by
earthwork features such as enclosing banks and ditches. Single upright stones
may be found within the circle or outside it and avenues of stones radiating
out from the circle occur at some sites. Burial cairns may also be found close
to and on occasion within the circle. Stone circles are found throughout
England although they are concentrated in western areas, with particular
clusters in upland areas such as Bodmin and Dartmoor in the south-west and the
Lake District and the rest of Cumbria in the north-west. This distribution may
be more a reflection of present survival rather than an original pattern.
Where excavated they have been found to date from the Late Neolithic to the
Middle Bronze Age (c.2400-1000 BC). It is clear that they were designed and
laid out carefully, frequently exhibiting very regularly spaced stones, the
heights of which also appear to have been of some importance. We do not fully
understand the uses for which these monuments were originally constructed but
it is clear that they had considerable ritual importance for the societies
that used them. In many instances excavation has indicated that they provided
a focus for burials and the rituals that accompanied interment of the dead.
Some circles appear to have had a calendrical function, helping mark the
passage of time and seasons, this being indicated by the careful alignment of
stones to mark important solar or lunar events such as sunrise or sunset at
midsummer or midwinter. At other sites the spacing of individual circles
throughout the landscape has led to a suggestion that each one provided some
form of tribal gathering point for a specific social group. Large regular
stone circles comprise an arrangement of between one and three rings of from
20 to 30 upright stones. The diameters of these circles range between 20 and
30 metres. They are presently known only in upland contexts, the majority
being located in Devon and Cornwall or Cumbria. Of the 250 or so stone circles
identified in England only 28 are examples of this type. As a rare monument
type which provides an important insight into prehistoric ritual activity all
surviving examples are worthy of preservation.

Mitchell's Fold is a large regular stone circle and, along with its outlying
standing stone, it survives well and is a good example of its class. It will
retain valuable archaeological information contributing to an understanding of
the social structure and religious beliefs of the prehistoric community for
which it formed a significant focus. The cairn to the south east, adjacent to
the standing stone, despite being disturbed, is considered of national
importance because of its association with the circle and the standing stone.
It will contain similar archaeological evidence relating to the monument as a
whole and more specific information relating to burial practice. Environmental
evidence, which will provide information on the landscape in which the cairn
was constructed, will survive sealed on the old land surface beneath the cairn
mound. The later boundary banks and sample of ridge and furrow and their
stratigraphic relationship to each other and to the earlier monuments, provide
information of the changing land use throughout the history of the site. They
will also preserve environmental evidence relating to the changing landscapes
and agricultural economies of the eras in which they were constructed.