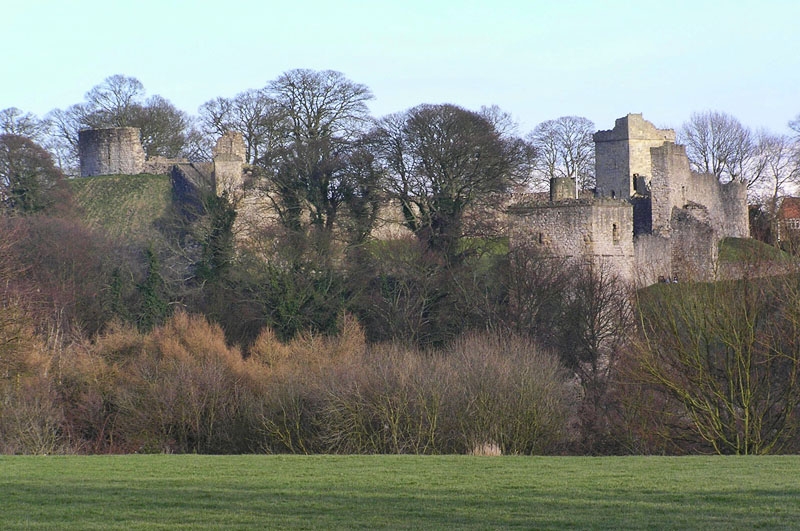 Motte castles are medieval fortifications introduced into Britain by the
Normans. They comprise a large conical mound of earth or rubble, the motte,
surmounted by a palisade and a stone or timber tower. In the majority of
examples an embanked enclosure containing additional buildings, the bailey,
adjoined the motte. Motte castles and motte and bailey castles acted as
garrison forts during offensive military operations and as strongholds. In
many cases they were aristocratic residences and the centres of local or royal
administration.
Between the Conquest and the mid 13th century, usually during the 12th
century, a number of motte and bailey castles and ringworks were remodelled in
stone. In the case of mottes, the timber palisade was replaced by a thick
wall to form a `shell keep'. If the tower on the motte was of timber, this
may also have been replaced in masonry and, if a bailey was present, its
ramparts were often strengthened with a curtain wall. Within the keep,
buildings for domestic or garrison purposes were often constructed against the
inside of the keep wall. Although over 600 motte castles or motte and bailey
castles are recorded nationally, examples converted into shell keeps are rare
with only about 60 sites known to have been remodelled in this way. As such,
and as one of a restricted range of recognised post-Conquest monuments, they
are particularly important for the study of Norman Britain and the development
of the feudal system. In view of this, all surviving examples will normally
be identified as nationally important.

Pickering Castle is an important example of a major early motte and bailey
castle which developed into an equally important shell keep castle whose
administrative and economic significance lasted throughout the Middle Ages and
its judicial role lasted into the post-medieval period. It is well-documented
and its standing remains are particularly well-preserved owing to its being
one of only a few castles unaffected by the Wars of the Roses and the Civil
War of the 17th century. The buried remains of a wide range of structures and
features relating to all phases of its history will survive in its two
baileys.