A Scheduled Monument in Aldwark, Derbyshire 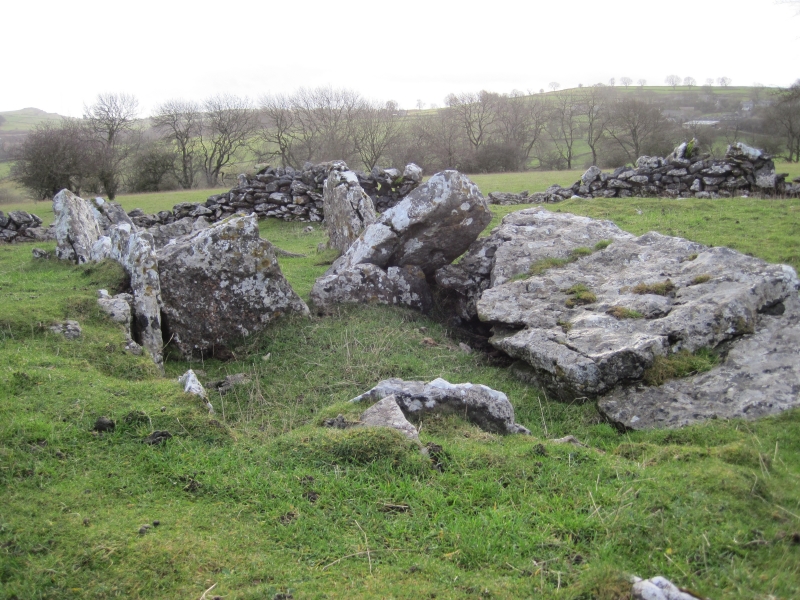 Green Low chambered tomb is located in the south-eastern uplands of the
limestone plateau of Derbyshire. The monument includes a sub-circular mound
measuring 22.5m by 19m and surviving to a height of c.0.75m. The profile of
the barrow has been lowered by stone-robbing carried out in the eighteenth
century. This activity exposed a single wedge-shaped chamber towards the
southern end of the barrow constructed of limestone slabs and measuring 1.8m
long by between 0.9m and 1.5m wide. This was approached from the south by a
short paved passage which, together with the chamber, was excavated by Thomas
Bateman in 1843 and found to contain disturbed human and animal remains and
sherds of Neolithic pottery. A second partial excavation of the barrow was
carried out in 1963 and 1964 under the direction of T G Manby. At this time
the passage was found to lead from the centre of a walled facade set c.5m in
from the southern edge of the barrow. The facade was 9.9m long and survived
to a height of c.0.5m as four courses of horizontally laid limestone blocks.
The ends terminated against projecting wings of barrow material, creating a
forecourt measuring 8.25m from east to west by 2.4m from north to south.
After burials had been placed in the passage and chamber, the tomb was closed
by filling the forecourt with rubble. The rest of the barrow was built of
horizontally laid limestone blocks covered over with earth. A disarticulated
skeleton was found east of the chamber and further human bones were found to
the north but scattered amongst the barrow material, indicating that they were
incorporated during construction. Beaker sherds, pieces of grooved ware
pottery and fragments of a polished greenstone axe indicate a Late Neolithic
date for the barrow. However, a disturbed area against the west side of the
chamber, from which Roman coins and pottery of the late third century AD were
recovered, show that the barrow was re-used at a much later date. Excluded
from the scheduling is the drystone wall crossing the southern edge of the
monument but the ground underneath is included.

Although Green Low chambered tomb has been disturbed by stone-robbing and
excavation, the latter has been restricted to small areas and archaeological
remains survive intact throughout much of the barrow. In addition, the facade
is a rare architectural feature and the monument in general is of an unusual
type common to the Peak District in which the burial chambers are covered by a
round or sub-circular barrow instead of the more typical linear form.