A Scheduled Monument in Combe, Oxfordshire 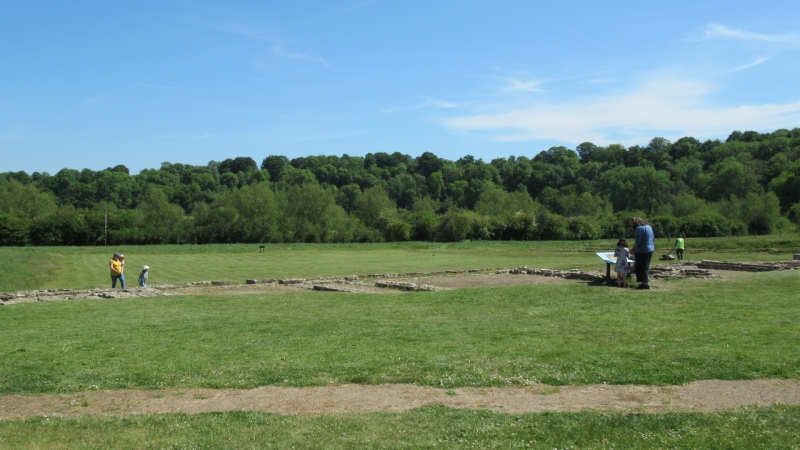 The monument includes the remains of a Roman villa and its associated
buildings and trackway situated 300m NNE of Upper Riding Farm. Part of the
monument is currently held in the Guardianship of the Secretary of State.
The principal villa building complex itself has three ranges of more than
60 rooms built on three sides of a courtyard, the fourth side being formed by
a corridor in which the gateway was set. Further ranges of buildings lie to
the south west of the main complex, either side of a metalled driveway which
led away from the gateway on the south eastern side of the courtyard. The
courtyard itself measures c.65m from south east to north west by 50m from
south west to north east.

The villa is of luxurious construction, including four bath suites, situated
close to the corners of the complex, 16 rooms containing mosaic pavements,
some of which remain visible above ground, 11 rooms with plain tessellated
floors and under-floor hypocaust heating in 11 rooms.

The main complex has been partially excavated and some of these areas are
now visible above ground, both in the open air and covered. The excavations
have shown that the site was first occupied during the Late Iron Age: a number
of pits and pottery fragments were found under the floors of the later villa
complex. The villa appears to have been constructed in three main phases, the
first phase being underway in the late second century AD. The villa began as a
winged-corridor building but was rapidly extended to form a courtyard villa.
During the early third century AD a number of rooms were divided and soon
afterwards rebuilding and extension of some of the buildings on the north
western and south western ranges was undertaken.

Further evidence of workshop units and other buildings to the south east have
been identified from aerial photographs which show that the site extended over
a large area on the west bank of the River Evenlode.

Excluded from the scheduling is the modern building housing the mosaics, the
custodian's building, all boundary walls and fences and services and their
trenches on the site, although the ground and fabric beneath all of these
features is included.

Romano-British villas were extensive rural estates at the focus of which were
groups of domestic, agricultural, and occasionally industrial buildings. The
term "villa" is now commonly used to describe either the estate or the
buildings themselves. The buildings usually include a well-appointed dwelling
house, the design of which varies considerably according to the needs, taste,
and prosperity of the occupier. Most of the houses were partly or wholly
stone-built, many with a timber-framed superstructure on masonry footings.
Roofs were generally tiled and the house could feature tiled or mosaic floors,
underfloor heating, wall plaster, glazed windows and cellars. Many had
integral or separate suites of heated baths. The house was usually accompanied
by a range of buildings providing accommodation for farm labourers, workshops
and storage for agricultural produce. These were arranged around or alongside
a courtyard and were surrounded by a complex of paddocks, pens, yards and
features such as vegetable plots, granaries, threshing floors, wells and
hearths, all approached by tracks leading from the surrounding fields. Villa
buildings were constructed throughout the period of Roman occupation, from the
first to the fourth centuries AD. They are usually complex structures occupied
over several hundred years and continually remodelled to fit changing
circumstances. They could serve a wide variety of uses alongside agricultural
activities, including administrative, recreational and craft functions, and
this is reflected in the considerable diversity in their plan. The least
elaborate villas served as simple farmhouses whilst, for the most complex, the
term "palace" is not inappropriate. Villa owners tended to be drawn from a
limited elite section of Romano-British society. Although some villas belonged
to immigrant Roman officials or entrepreneurs, the majority seem to have been
in the hands of wealthy natives with a more-or-less Romanised lifestyle, and
some were built directly on the sites of Iron Age farmsteads. Roman villa
buildings are found throughout lowland Britain and between 400 and 1000
examples have been recorded in England. Of these less than 10 are examples of
`major' villas. These were the largest, most substantial and opulent type of
villa which were built and used by a small but extremely wealthy section of
Romano-British society. Roman villas provide a valuable index of the rate,
extent and degree to which native British society became Romanised, as well as
indicating the sources of inspiration behind changes of taste and custom. In
addition, they serve to illustrate the agrarian and economic history of the
Roman province, allowing comparisons over wide areas both within and beyond
Britain. All major villas will be identified as nationally important.

The North Leigh villa survives as an extensive monument, our understanding of
which has been enhanced by partial excavations and aerial photography.
Excavation has also demonstrated that further archaeological remains will
survive providing additional evidence of the villa's construction and the
landscape in which it was built.
The villa is a well known educational amenity and is open to the public as a
monument in the Guardianship of the Secretary of State, providing a vivid
example of this type of monument and how it functioned.