A Scheduled Monument in Harlaxton, Lincolnshire 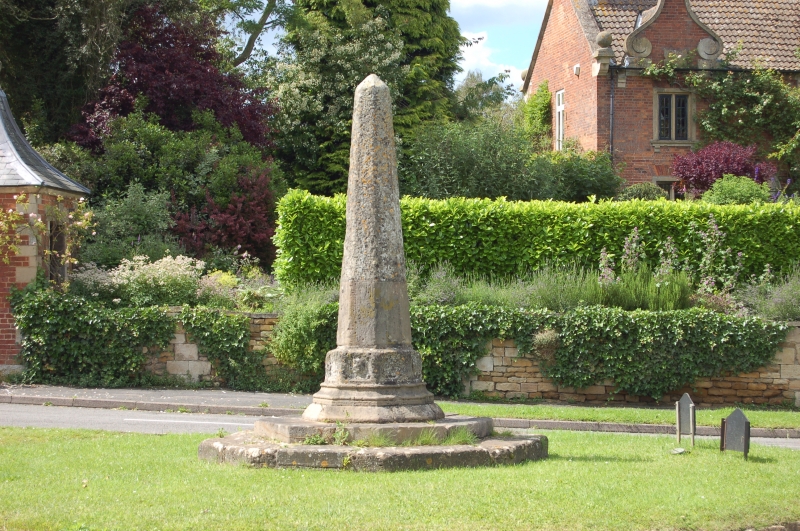 The monument includes Harlaxton village cross, a standing stone cross located
on a small green at a road junction in the village centre. The cross is of
stepped form and is medieval and later in date. The monument includes the
base, comprising two steps, a plinth and a socket-stone, and the shaft. The
cross is Listed Grade II.

The base includes two steps, both octagonal in plan. The lower step is
principally constructed of worn limestone slabs and measures about 2.7m in
width and is 0.21m high and 0.43m deep; it is surrounded by a small modern
concrete plinth. The upper step is constructed of a green sandstone and is
about 0.14m high and 0.36m deep. The lower step is medieval in date while the
upper represents a late 19th-/early 20th-century restoration. Also dating
to the restoration is the moulded plinth which rests on the upper step; it is
octagonal in section and tapers upwards to a height of about 0.33m. Resting on
the plinth is the medieval socket-stone, of white limestone, also octagonal in
section. The sides of the socket-stone are carved with alternating shields
and quatrefoils. Set into the socket-stone is the shaft, which is composed of
two stones of tapering octagonal section: the lower is broad, measuring 1.7m
in circumference at the base, and stands 0.55m high; onto it fits the upper,
of white limestone, which tapers to a cone-shaped point. The upper stone is
medieval, while the lower was added during the restoration. The full height
of the cross is nearly 3m.

Harlaxton village cross is a good example of a medieval standing cross with a
stepped base and carved socket-stone surviving in good condition. Situated at
a road junction in the village centre, it is believed to stand in or near its
original position. Limited development of the area immediately surrounding the
cross indicates that archaeological deposits relating to the monument's
construction and use in this location are likely to survive intact. While
parts of the cross have survived since medieval times, subsequent restoration
has resulted in its continued use as a public monument and amenity.