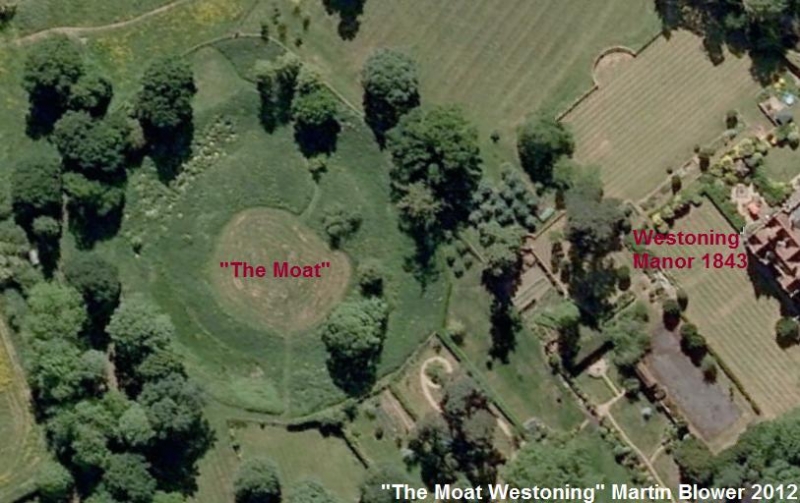 The moated site at Westoning lies on the western side of the village,
immediately to the south east of Westoning Manor. It consists of a circular
moated enclosure, about 80m in diameter, with associated drainage leats and
fishponds.

The moat ditch is approximately 15m wide and approximately 3m deep and it
encircles a flat island 50m in diameter. To the south, a drainage leat,
which runs down from the north east, has been diverted around the perimeter of
the moated site forming a partial outer ditch, 8m wide by 1m deep. The leat
continues southwards where it leads into a number of drains and leats which
surround the monument. To the south west of the moat are a series of dry
fishponds indicated by rectangular depressions, each about 1m deep. Two of the
ponds are clearly visible; a large pond measuring about 15m by 10m flanked by
a smaller pond to the north measuring 10m by 5m. The ponds were supplied from
the south east by two parallel leats flowing from a drain connected to the
ditch surrounding the southern side of the moat. A third supply entered the
northern pond from a parallel drain running from the same ditch on the western
side of the moat. The water level was regulated by an outlet leat following a
south westerly route from the western corner of the ponds. A further leat
running on a parallel alignment to the south east may also have been used to
regulate water levels by diverting the inward flow from the supply channel.
The supply channels, together with the outer moat ditch and the fishponds,
form the boundaries of a roughly rectangular enclosure, 75m by 50m, to the
south west of the moat.

The 1842 Enclosure Award map shows that the moat was the site of the original
manor house. The map also clearly marks the entrances on the north and west
sides of the moat. The construction of the moat has been ascribed to William
Inge, Chief Justice during the reign of Edward II, who acquired the manor of
Westoning in 1297 and initiated many improvements. After a period of decline
in the 15th and 16th centuries, Westoning Manor was granted to Thomas Curzon,
whose descendant was created Earl of Pomfret in 1772.

All fences and posts are excluded from the scheduling although the ground
beneath is included.

The Westoning moated site is a very well preserved, high status moat with
important royal connections. Historical records indicate that the site was in
continuous occupation from the 14th to the 19th century which, together with
its essentially undisturbed character, will allow a study of changes made
through an extended period of time at a site representative of the upper
orders of society. The island will retain buried evidence of buildings, and
the silt deposits within the moat will contain both artefacts and
environmental evidence related to the occupation of the site. The site is
further enhanced by the presence of the associated fishponds and complex
water-management system.
A fishpond is an artificially created pool of slow moving freshwater
constructed for the purpose of cultivating, breeding and storing fish to
provide a constant and sustainable supply of food. The tradition of
constructing and using fishponds in England began during the medieval period
and reached a peak in the 12th century. They were largely built by the wealthy
sectors of society; monastic instititions and royal residences often having
large and elaborate fishpond complexs. Fishponds were often grouped together,
either clustered or in line, and joined by leats; each pond being stocked with
a different species or age of fish. The difficulty of obtaining fresh meat in
the winter and the value placed on fish in terms of its protein content and as
a status food may have been factors which favoured the development of
fishponds and made them so valuable. Fishponds are important for their
associations with other classes of medieval monument and in providing evidence
of site economy.
The fishpond complex to the south east of the moated site near Westoning Manor
is a well preserved example of a nucleated pond group. The design of the ponds
shows ingenuity in the way that the stock was managed and will provide
valuable evidence for the economy of the adjacent moated site. The silts
within the leats and ponds are virtually undisturbed and will retain artefacts
and environmental evidence related to the period of use.