A Scheduled Monument in Rock, Worcestershire 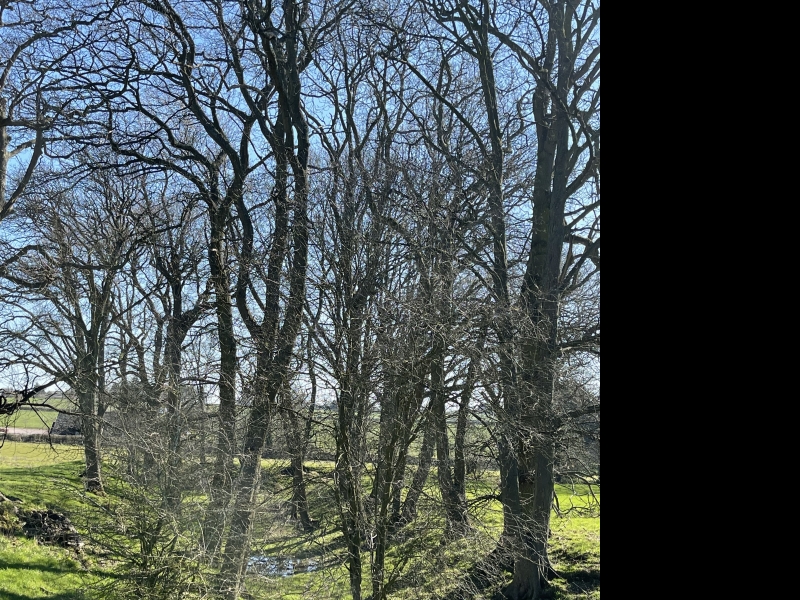 The monument includes the remains of a moated enclosure, deserted medieval
village and associated earthworks, situated on the level summit of a low hill
in gently rolling farmland. The moated enclosure is rectangular in shape with
overall dimensions of 114m north to south by l10m east to west. It is defined
by a substantial ditch averaging l8m wide and 3m deep, flanked around its
outer edge by a flat-topped bank averaging 9m wide and 0.8m high. The bank is
broken by an original entrance midway along its west side where a causeway 7m
wide crosses the ditch. The central platform of the moat is roughly square
with sides of 58m giving an enclosed area of some 0.3ha. The platform surface
is irregular in nature, indicating that internal structures survive as buried
features. To the immediate west of the moat the truncated ends of east to
west orientated ridge and furrow are visible. Associated earthworks, which
include enclosure banks averaging 0.5m high and part of a hollow way, can be
recognised adjacent to the moat on its south side. The deserted medieval
village remains lie to the north-east of the moat, in an area recently
ploughed. They comprise a series of linear hollows orientated north-west to
south-east which represent the position of village streets and several
rectangular hollows representing house platforms.

The area immediately around the farm house and the area of the church and
churchyard are not part of the scheduling. All boundary features are excluded
from the scheduling though the ground beneath is included.

The moated site south-east of St Peter and St Paul's Church survives well and
is a good example of its class. The moat interior, which is undisturbed and
shows surface indications of sub-surface structures, will retain valuable
archaeological evidence about its structure and use. The ditch fills of the
moat will retain important environmental evidence relating to the landscape in
which the moat was constructed and of landscape changes during its period of
use. Its importance is greatly enhanced by the survival in adjacent areas of
settlement remains. Although these have been recently ploughed and planted
with a root crop, they retain many visible archaeological features which will
contain important comparative evidence for the structure and economy of the
settlement adjacent to the moated site. In the context of the settlement site
and moat the headlands of the open-field systems will provide important
information regarding the layout and chronology of the agricultural regime
upon which the moated site and its settlement depended.