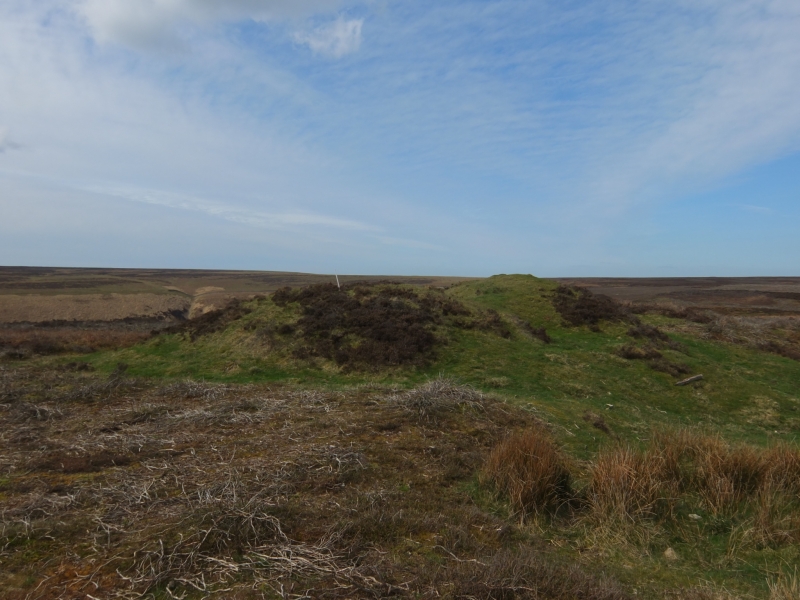 The monument includes two adjacent round barrows on the southern edge of Arden
Great Moor overlooking Thorodale. Many other similar monuments are found on
Arden Moor.
The monument includes a well defined earth and stone mound 15m in diameter
with a smaller mound 12m in diameter touching it to the north-west. The larger
mound is 1.8m high and the smaller one 1m high. There is a single ditch on
each of the sides of the long axis of the conjoined barrows, with a causeway
crossing each centrally. The ditch is a maximum of 4.5m wide and 0.8m at its
deepest. The southern ditch projects beyond the eastern end of the large mound
by 4m. The western end of the southern ditch has been destroyed by a small
quarry. The centre of each mound has been dug into in the past. The soil from
these early excavations is spread around in uneven piles creating an irregular
profile.
It is one of many similar monuments on this area of the Hambleton Hills. Many
of these lie in groups, particularly along the watersheds. They provide
evidence of prehistoric territorial organisation, marking divisions of
land; divisions which still remain as some parish or township boundaries.

Despite limited disturbance both these barrows have survived well. Significant
information about the original form, burials placed within them and evidence
of earlier land use beneath the mounds will be preserved.
Together with adjacent round barrows this monument is thought to mark a
prehistoric boundary in this area. Similar groups of monuments are also known
across the north and central areas of the North York Moors providing important
insights into burial practice. Such groupings of monuments also offer
important scope for the study of the division of land for social, ritual and
agricultural purposes in different geographical areas during the prehistoric
period.