Silbury Hill: a monumental Neolithic mound west of the River Kennet and south of Avebury village

A Scheduled Monument in Avebury, Wiltshire 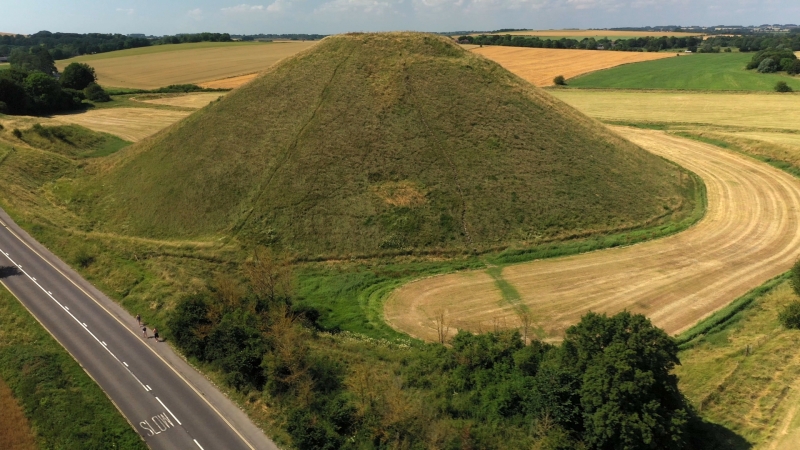 Silbury Hill is located on a slight natural spur on the western side of the
Kennet valley, south of the village of Avebury.
The monument has a flat-topped conical mound surrounded by a quarry ditch and
is clearly visible from much of the surrounding countryside. The mound, which
is 39.3m high and has a diameter of 167.6m, was constructed in a series of
steps, creating a profile resembling a stepped conical pyramid. Stone and
wooden fences were used to control the placement of building material and to
prevent the monument's sides from slipping.
The mound is surrounded by a number of inter-connected quarry ditches which
provided the majority of the materials needed to construct the mound. These
quarry ditches are visible as earthworks, although they have been partially
infilled as a result of ploughing over the years and would originally have
been much deeper. A linear section of this quarry runs west from the monument
and breaks the otherwise evenly spread layout of the ditch. The ditches have
maximum dimensions of 355m east to west by c.240m north to south and now have
a maximum depth of 1.3m. It has been suggested that the ditches were carefully
laid out around the monument to form an image of the Neolithic `mother
goddess' deity.
The name `Silbury Hill' was in use in 1663, as was the alternative of Selbury,
a direct derivation of the Selburi hille of c.1540.
Excluded from the scheduling is the fence surrounding the mound and all signs
around the monument's base but the ground beneath these features remains
included in the scheduling

A small number of areas in southern England appear to have acted as foci for
ceremonial and ritual activity during the Neolithic and Early Bronze Age
periods. Two of the best known and earliest recognised, with references in the
17th century, are around Avebury and Stonehenge, now jointly designated as a
World Heritage Site. In the Avebury area, the henge monument itself, the West
Kennet Avenue, the Sanctuary, West Kennet long barrow, Windmill Hill
causewayed enclosure and the enigmatic Silbury Hill are well-known. Whilst the
other Neolithic long barrows, the many Bronze Age round barrows and other
associated sites are less well-known, together they define one of the richest
and most varied areas of Neolithic and Bronze Age ceremonial and ritual
monuments in the country.

Silbury Hill is the most famous example of a rare class of monuments known as
Neolithic monumental mounds of which only four examples have so far been
identified with any certainty. Although its precise function is unclear, it is
reputed to be the largest such mound in the world and would have taken many
million man-hours to construct. The site therefore had considerable importance
to the prehistoric inhabitants of the Avebury area and would have required a
high level of social organisation to ensure its completion. Both the mound and
ditches survive well and are integral to providing a full interpretation of
the development of the Avebury landscape.