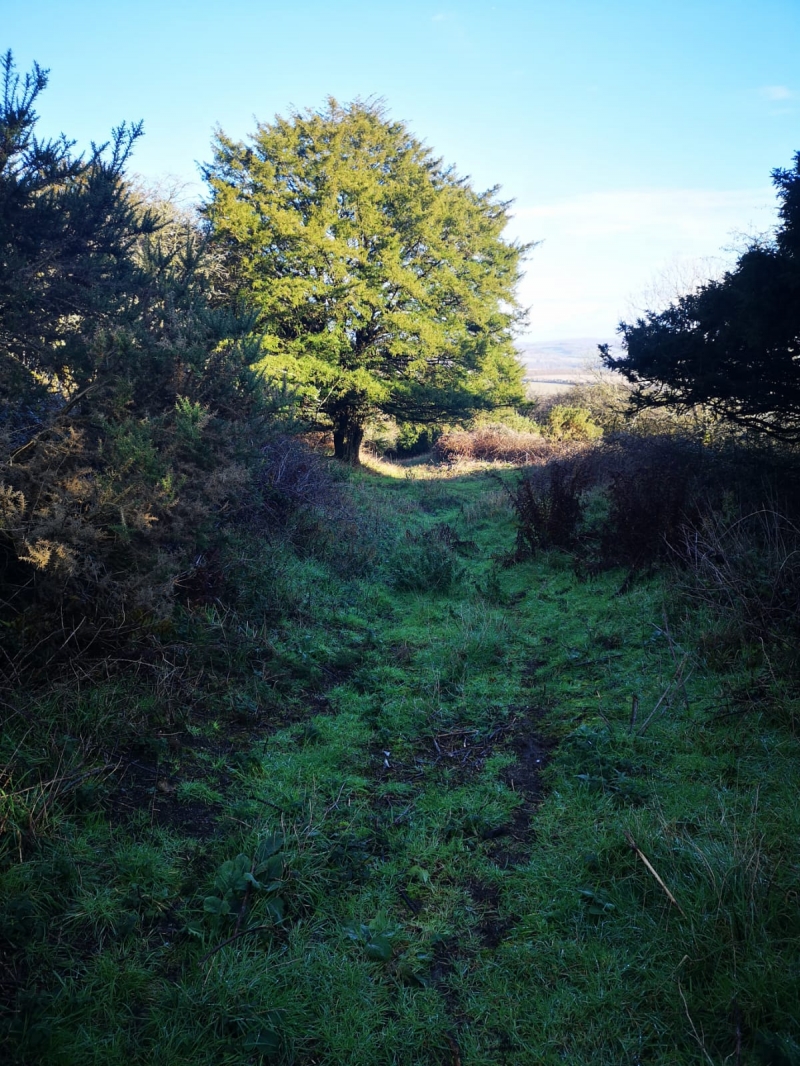 The monument includes a cross dyke running across a spur which projects from a
ridge of the Sussex Downs.
The cross dyke is a south west-north east orientated, slightly curving ditch
200m long, 5m wide and up to 0.5m deep flanked on the south east side by a
bank 3m wide, surviving to a height of 0.4m above the surrounding ground. The
cross dyke spans the full width of the spur, fading out at the point where the
ground falls away steeply on each side.

Beneficial land use over the years has enabled Bow Hill and Kingley Vale to
support one of the most diverse and well-preserved areas of chalk downland
archaeological remains in south eastern England. These remains are considered
to be of particular significance because they include types of monument,
dating from the prehistoric and Roman periods, more often found in Wessex and
south western Britain. The well-preserved and often visible relationship
between trackways, settlement sites, land boundaries, stock enclosures, flint
mines, ceremonial and funerary monuments in the area gives significant insight
into successive changes in the pattern of land use over time.
Cross dykes are substantial linear earthworks typically between 0.2km and 1km
long comprising one or more ditches arranged beside and parallel to one or
more banks. They generally occur in upland situations, running across ridges
and spurs. They are recognised as earthworks or as cropmarks on aerial
photographs, or as combinations of both. The evidence of excavation and
analogy with associated monuments demonstrates that their construction spans
the millenium from the Middle Bronze Age, although they may have been reused
later. Current information favours the view that they were used as territorial
boundary markers, probably demarcating land allotment within communities,
although they may also have been used as trackways, cattle droveways or
defensive earthworks. Cross dykes are one of the few monument types which
illustrate how land was divided up in the prehistoric period. They are of
considerable importance for any analysis of settlement and land use in the
Bronze Age. Very few have survived to the present day and hence all
well-preserved examples are considered to be of national importance.
Despite some damage caused by the action of tree roots, the cross dyke on the
south eastern spur of Bow Hill survives well and will contain archaeological
remains and environmental evidence relating to the monument and the landscape
in which it was constructed. The cross dyke is part of a group of linear
earthworks constructed across the three limbs of the Y-shaped hill, partly
enclosing the hilltop and the Devil's Humps round barrow cemetery. These
monuments are broadly contemporary and their close association will therefore
provide evidence for the relationship between land division and funerary
practice during the period of their construction and use.