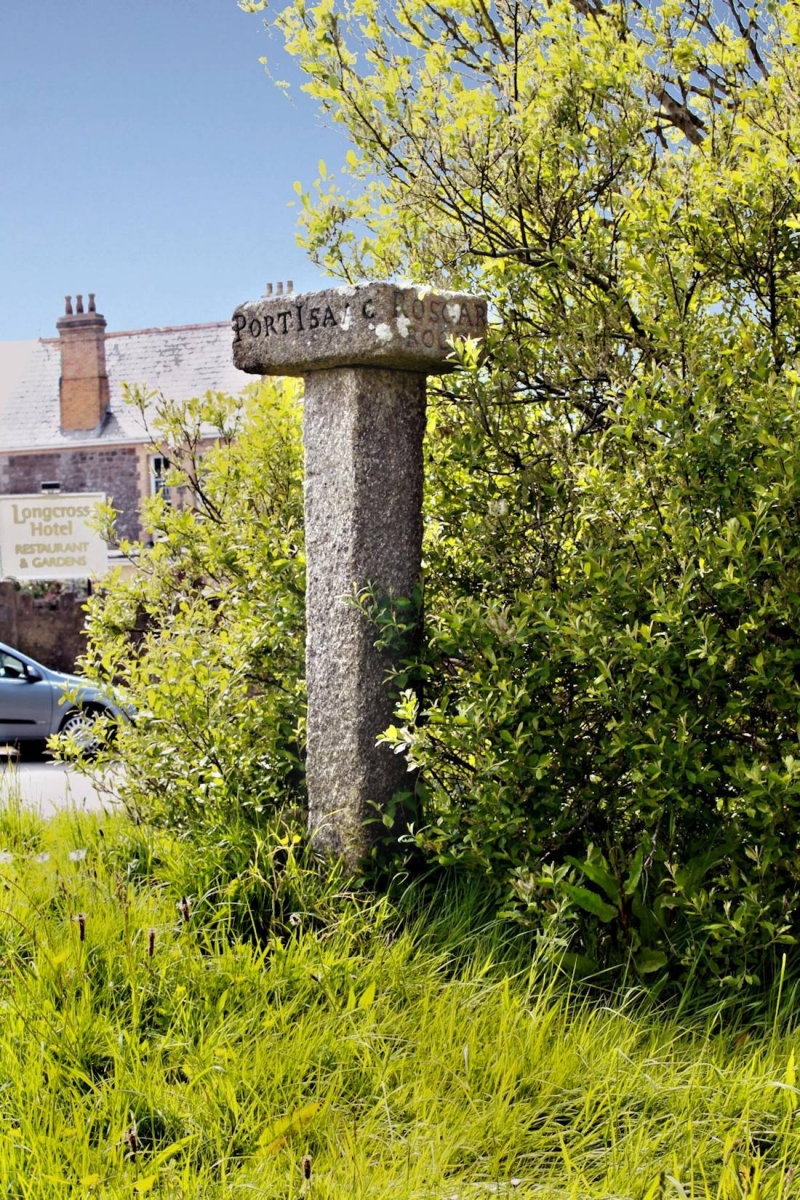 The monument includes an early Christian memorial stone, which later
functioned as a medieval wayside cross, called the Long Cross, situated at a
junction of the same name on the road linking St Endellion with the site of a
medieval manor house at Roscarrock and with the harbour at Portquin on the
north Cornish coast. The monument also includes a post medieval granite
guide post adjacent to the north west of the cross.
The Long Cross survives as an erect rectangular-section granite shaft set in a
roughly-shaped rounded base-slab of local metamorphic stone. It measures 1.59m
in overall height. The shaft, comprising the early Christian memorial stone,
is 1.48m high, measuring 0.29m wide by 0.2m thick at the base, tapering to
0.18m thick at the top. The shaft has a cemented repair to a transverse
fracture across its lower third.
At the upper end of the south west principal face of the shaft is an incised
motif called a 'Chi Rho monogram', visible as an upright cross formed from a
capital letter 'I' with a central cross-bar. The lower and side limbs of this
motif end with large curved transverse strokes, called serifs, but the
terminal of the uppermost limb curves round to form an open letter 'P'. This
motif measures 0.2m long and 0.2m wide. The 'Chi Rho' monogram is an early
medieval shorthand symbol for Christ, formed by the first two Greek letters
for Christ, and dated in south west England from the later fifth to seventh
centuries AD. Below the Chi Rho monogram is a transverse curved line with
small rounded terminals which arches over a Latin inscription incised in
two parallel lines running down the shaft. The inscription is in an early
medieval form of script derived from Roman-style capitals and reads 'Brocagni
ihc iacit nadotti filius' which translates as 'Brocagnus lies here, the son of
Nadottus'. Along the right hand, southern, edge of the same face is another
inscription incised in an early medieval script of Irish origin called
'ogham', which occurs on Christian monuments of the fifth and sixth centuries
AD. The ogham incription, whose lettering is represented entirely by short
incised lines in varying multiples and at various angles, has been read as
'Brocagni' repeating the name in the Latin inscription. The use of the Chi Rho
monogram, the inscriptions in both Latin and ogham, the formula employed in
the Latin inscription and the style of the lettering, combine to suggest a
sixth century date for this memorial stone.
Near the upper end of the north east principal face of the shaft is a very low
relief equal-limbed cross. In the top edge of the shaft is a flattened oval
mortice slot measuring 0.1m by 0.05m and 0.9m deep. This slot is considered
to be a later medieval feature to secure a separate cross head when this
complete early Christian memorial stone later functioned as the shaft of a
medieval wayside cross. The shaft is set in a large sub-circular boulder of
local rock, roughly shaped and measuring 0.88m across and rising up to 0.11m
above ground level.
The Long Cross is situated at a junction of the same name where a ridge-top
route running north west from St Endellion forks, one branch continuing along
the ridge to the harbour at Portquin, the other extending NNW to the site of
the medieval manor house at Roscarrock. Another road also joins this junction
from the village of Trelights to the south. An early medieval cemetery has
been discovered near the church at St Endellion. The dedication of that church
is to St Endellienta, whom tradition claims to have been one of the children
of the Irish king Brychan who acquired the throne of the area which is now
known as Brecon in south Wales in the fifth or sixth century AD. The period to
which the tradition relates and its inclusion of Irish influence are features
shared with this memorial stone, with one writer equating the name 'Brocagni'
on the inscription to the 'Brychan' of the legend. The ridge-top route passing
east-west through St Endellion is an ancient route heading towards a Roman
crossing point of the River Camel estuary near St Enodoc to the east; its
continuation is also marked by an early medieval inscribed and decorated cross
shaft.
Early 19th century records describe this stone in its base at its present
location. Later in the 19th century the shaft, but not its base, was moved
2.4km to the north west to Doyden headland on the coast. In 1932 the cross was
returned to its base at its former, and present, location.
The post-medieval granite guide post is situated 3.12m north west of the Long
Cross. It is visible as a square-section granite shaft, 1.52m high with sides
0.2m-0.23m wide, surmounted by a flat, rectangular granite slab measuring
0.55m long by 0.42m wide and 0.17m thick. The sides of the slab are incised
with the destinations along the four roads they face, as follows; to the
north east 'Roscarrock', to the south east 'Port Isaac', to the south west
'Padstow', and to the north west 'Portquin'. The upper western edge of the
shaft has been repaired with a new section of granite and the western corner
of the direction slab has also been fractured. This is one of a distinctive
group of 18th century guide posts which employ this design found in north
Cornwall and around the periphery of Bodmin Moor.
The modern signpost west of the Long Cross, the GPO marker post south west of
the guide post and the surface of the modern metalled road passing south west
of the Long Cross are excluded from the scheduling but the ground beneath them
is included.

Early Christian memorial stones are inscribed free-standing stones
commemorating named individuals and dating to the early medieval period (c.AD
400 - 1100). The stones are erect, roughly dressed or undressed slabs, bearing
incised inscriptions, usually set in one or more vertical lines down one face
of the slab but in four examples the text runs horizontally across the slab.
All except two recorded texts are in Latin and, depending on their date, may
be inscribed in a script of Romanised capitals or an insular form of lower
case lettering called miniscules, or a mixture of the two. Six stones also
have inscriptions in an Irish script called ogham. Most inscriptions are
simple, bearing a personal name and often stating a family relationship.
Fourteen stones contain elements of the simple inscriptions within a longer,
complex inscriptive formula, often including the phrase 'hic iacet' (here
lies). Additional decoration is found on very few stones and usually comprises
a cross within a circle. Early examples, prior to the eighth century AD, may
bear an early Christian symbol called a Chi Rho monogram, compounding the
first two Greek letters of the name 'Christ'.
Early Christian memorial stones are largely restricted to areas which retained
Celtic traditions during the early medieval period, with at least 139 recorded
from Wales. In England, they are almost entirely confined to the south west
peninsula; of the 56 recorded examples, 37 occur in Cornwall, 11 in Devon, a
group of five in Dorset, and single examples in Somerset, Hampshire and
Shropshire. As a very rare and diverse class of monument important for our
understanding of the social organisation and the development of literacy and
Christianity during the early medieval period, all surviving groundfast
examples of early Christian memorial stones are considered worthy of
protection.
Largely post-dating the early Christian memorial stones, wayside crosses are
one of several types of medieval Christian cross, erected mostly during the
9th - 15th century AD period. Besides serving the function of reiterating and
reinforcing the Christian faith amongst those who passed the cross, wayside
crosses often fulfilled a role as waymarkers, especially in difficult or
otherwise unmarked terrain. The crosses might be on regularly used routes
linking ordinary settlements or on routes having a more specifically religious
function. Over 350 wayside crosses are known nationally, concentrated in
south west England throughout Cornwall and on Dartmoor where they form the
commonest type of stone cross. A small group also occurs on the North York
Moors. Outside Cornwall, almost all wayside crosses are formed as a 'Latin'
cross, in which the projecting arms of the cross-head are unenclosed. In
Cornwall wayside crosses vary considerably in form and decoration. The
commonest type is the round or 'wheel' head on the faces of which various
forms of cross or related designs were carved or incised. The Latin cross is
less common, and much rarer are simple slabs with a low relief or incised
cross on both faces. Most wayside crosses have either a simple socketed base
or show no evidence for a separate base at all. Wayside crosses contribute
significantly to our understanding of medieval religious customs and
sculptural traditions and to our knowledge of medieval routeways and
settlement patterns. The Long Cross has survived well as a complete and very
rare example of an early Christian memorial stone, not materially affected by
the later mortice
in the head or by the fracture across the shaft. Its importance is further
emphasised by being one of only six such memorial stones in England that bear
an ogham inscription and one of only four inscribed memorial stones in south
west England that bear the Chi Rho monogram. In view of these features and its
several links with local traditions about the period contemporary with this
memorial's construction, this stone has recieved mention in national and
regional reviews on the nature of early Christianity and on political
developments in western Britain in the early post-Roman period. The
inscription itself is of importance from a period generally lacking in such
historical references. Its reuse as the shaft for a wayside cross demonstrates
the developing roles of cross-marked slabs during the medieval period, and
despite the loss of the head of the wayside cross and its temporary relocation
in the later 19th and early 20th centuries, the cross remains as a marker at
its original junction, demonstrating well the major roles of wayside crosses,
marking the way to the parish church, and an important route within the parish
to the medieval manor at Roscarrock and the harbour at Port Quin. The cross
also illustrates the longevity of many such routes still in use. The presence
of the adjacent post-medieval guide post at the junction demonstrates the
development of secular waymarkers after the upheavals in religious attitudes
in the 16th century.