A Scheduled Monument in Aldford and Saighton, Cheshire West and Chester 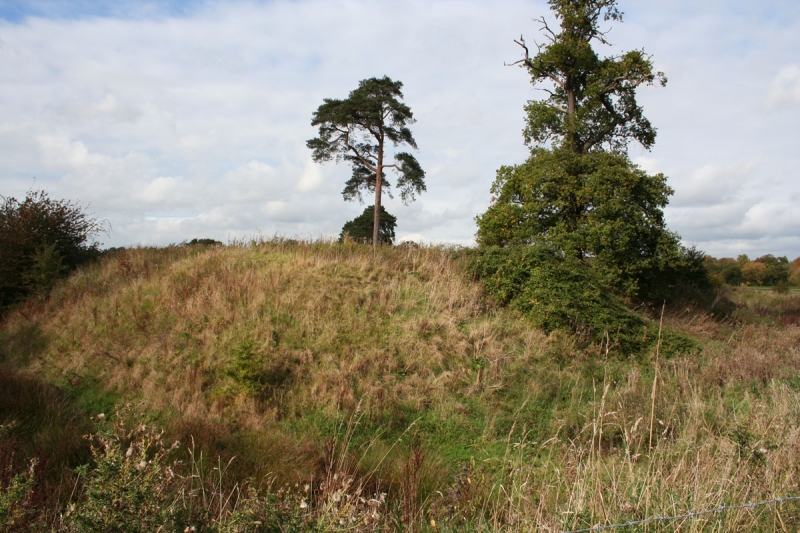 The monument at Aldford is a motte and bailey castle modified by the later
addition of a shell keep castle. The site is stratigically situated 500m south
of a crossing point of the River Dee that has been in use since Roman times,
and includes a sub-rectangular flat-topped motte measuring 35m by 33m that is
surrounded by a substantial dry ditch, up to 40m wide and 5.8m deep. South of
the motte ditch is a triangular bailey that includes an area of 4250 sq.m. The
bailey is flanked by a dry ditch up to 19m wide and 2.5m deep which remains
visible on the eastern and western sides. Upcast from this ditch has been used
to create banks either side of the bailey's eastern ditch and adjacent to the
largely infilled southern arm. An outer bank also flanks the ditch east of the
motte. Foundation stones of the curtain wall of the later shell keep castle
are exposed just below the crest of the motte on the southern and eastern
sides and there are small mounds of rubble at the south-east and north-east
corners of the motte.
The motte and bailey was constructed in about the mid 12th century. Robert de
Aldford subsequently refortified the castle in stone just before or during the
reign of Henry II (1154-89). The castle passed to the Ardene family in the
early 13th century and then to the Stanleys in 1464 before being purchased by
Sir William Brereton during the early 16th century. By the 18th century the
castle had fallen into decay and passed to the Grosvenor family who made a
landscape feature of the earthworks by planting trees, filling the motte and
bailey ditch with water, and constructing a cistern house or bathhouse in the
bailey ditch.
All walls and fences are excluded from the scheduling. The ground beneath
them, however, is included.

The motte and bailey castle at Aldford is one of a group of early
post-conquest motte and baileys forming a defensive system, the aim of which
was to curb Welsh raids on the rich farming areas of Cheshire. Its earthworks
are well preserved and the monument is the best surviving example of a Norman
castle in Cheshire. It will retain considerable detail of its original form
and the buildings which lay within it. Additionally it is a rare example in
the county of a motte and bailey later modified in stone as a shell keep
castle.