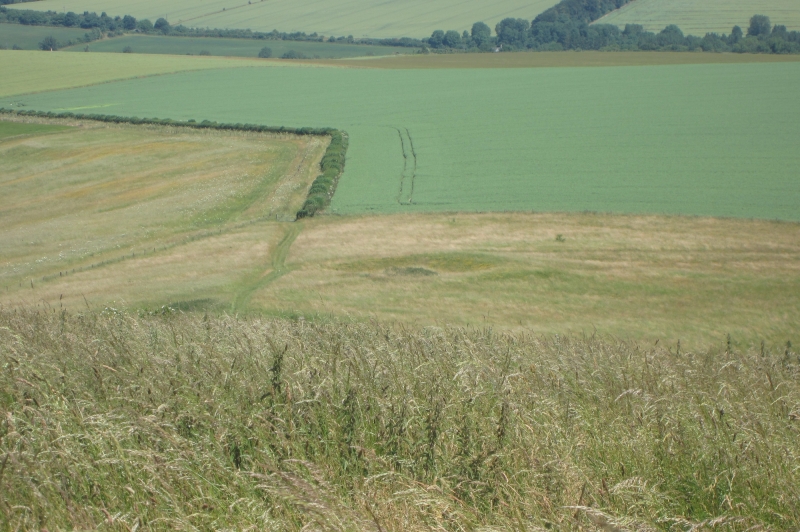 This record was the subject of a minor enhancement on 16 September 2015. This record has been generated from an "old county number" (OCN) scheduling record. These are monuments that were not reviewed under the Monuments Protection Programme and are some of our oldest designation records.

This monument includes a barrow situated at the top of an extremely steep escarpment overlooking the dry valley known as Punch Bowl Bottom and with distant views to the River Nadder. The barrow survives as a circular mound measuring 16m in diameter and 2m high surrounded by a largely buried quarry ditch of up to 3m wide and 0.2m deep from which the construction material was derived.

Further archaeological remains survive in the vicinity some are scheduled separately whilst others are not included because they have not been formally assessed.

Cranborne Chase is an area of chalkland well known for its high number, density and diversity of archaeological remains. These include a rare combination of Neolithic and Early Bronze Age sites, comprising one of the largest concentrations of burial monuments in England, the largest known cursus (a linear ritual monument) and a significant number and range of henge monuments (Late Neolithic ceremonial centres). Other important remains include a variety of enclosures, settlements, field systems and linear boundaries which date throughout prehistory and into the Romano-British and medieval periods. This high level of survival of archaeological remains is due largely to the later history of the Chase. Cranborne Chase formed a Royal Hunting Ground from at least Norman times, and much of the archaeological survival within the area resulted from associated laws controlling land-use which applied until 1830. The unique archaeological character of the Chase has attracted much attention over the years, notably during the later 19th century, by the pioneering work on the Chase of General Pitt-Rivers, Sir Richard Colt Hoare and Edward Cunnington, often regarded as the fathers of British archaeology. Archaeological investigations have continued throughout the 20th century and to the present day. Bowl barrows, the most numerous form of round barrow, are funerary monuments dating from the Late Neolithic to the Late Bronze Age, with most examples belonging to the period 2400-1500 BC. They were constructed as earthen or rubble mounds, sometimes ditched, which covered single or multiple burials. They occur either in isolation or grouped as cemeteries and often acted as a focus for burials in later periods. Often superficially similar, although differing widely in size, they exhibit regional variations in form and a diversity of burial practices. A cluster of at least 395 examples has been identified on Cranborne Chase. Some of these have been levelled by ploughing but remain visible from the air as ring ditches. Buried remains will nevertheless survive at these sites, both within the ditch fills and associated with the central burial pit. Bowl barrows are particularly representative of their period, whilst their considerable variation of form and longevity as a monument type will provide important information on the diversity of beliefs and social organisation amongst early prehistoric communities. Often occupying prominent locations, they are a major historic element in the modern landscape and constitute a significant component of the archaeology of Cranborne Chase. All surviving examples within this area are, therefore, considered to be of importance. The bowl barrow 1285m north west of Poor Patch survives well and will contain archaeological and environmental evidence relating to its construction, longevity, territorial significance, social organisation, funerary and ritual practices and overall landscape context.