A Scheduled Monument in Cathedral, Worcestershire 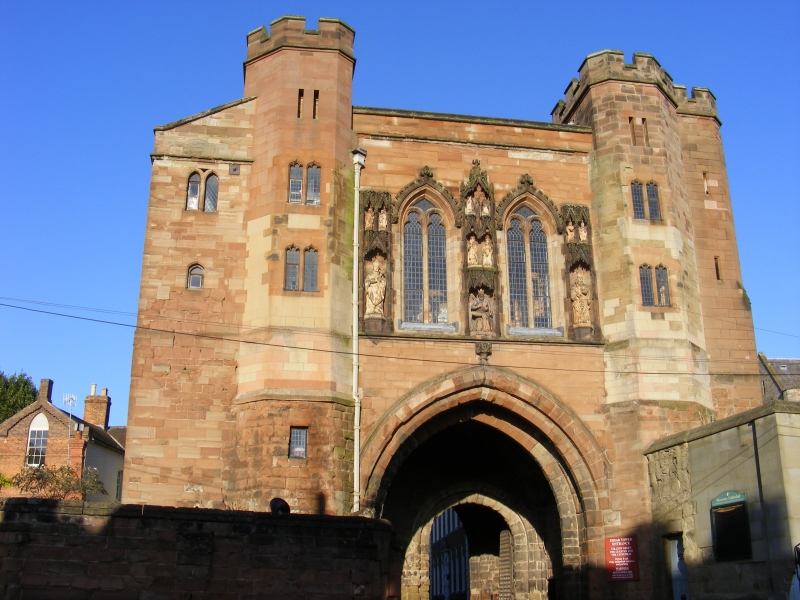 Church of England Parish: Worcester St Nicholas and All Saints

This monument includes a gatehouse situated on the east side of the College Green part of Worcester Cathedral Precincts. The monument survives as a gatehouse tower that was rebuilt between 1300 and 1335, remodelled in 1369 and restored during the late 19th century. The gatehouse is constructed from coursed red sandstone with a concealed tile roof. It is rectangular in plan with octagonal embattled towers at each corner and an extension on the south western side. The east facing entrance façade has a wide pointed triple chamfered arch with canopied niches over the apex. Ether side of the niches are two two-light trefoil headed windows with crocketed hoodmoulds. Further decorated niches are situated to the sides of the windows. The niches contain eleven terracotta figures of kings, queens and bishops. The west facing elevation has a wide triple chamfered arch below empty canopied niches. Ether side of the niches are two two-light trefoil headed windows with crocketed hoodmoulds and a single light window above a stone corbel. The north and south eastern towers have chamfered bands, two pairs of ogee headed lights and twin slit windows below a crenulated parapet with stone coping. The north and south western towers are off-set to each stage with chamfered bands and a stone coped crenulated parapet. The north western tower has two blocked slit windows on the upper stage and five single light stairway windows. The south western tower has one slit window in the upper stage. The thoroughfare has a double and ridge ribbed ceiling and is divided by a cross wall with carriage and pedestrian arches. The carriage arch is round headed with a triple chamfer and timber double doors. The pedestrian arch is double chamfered with a wooden door. A third doorway is double chamfered and leads into the north western tower stairs. Above the thoroughfare, the gatehouse contains rib vaulted rooms, the largest of which has a small doorway with double curved lintel shoulders. A low sandstone extension is situated on the south western side.

In 1204 King John ordered a wooden castle gatehouse to be rebuilt in stone. The gatehouse was then rebuilt for the priory between 1300 and 1335 and it was crenulated in 1369. It was extensively restored by the Worcester architect, Abraham Edward Perkins during 1869.

Edgar Tower is listed at Grade I and is also known as St Mary’s Gate.

Early monasteries were built to house communities of monks or nuns; sometimes houses were `mixed' and included both sexes. The main buildings provided facilities for worship, accommodation and subsistence. They included a series of timber halls and perhaps a stone church, all located within some form of enclosure. The Benedictine monks, who wore dark robes, came to be known as `black monks'. These dark robes distinguished them from Cistercian monks who became known as `white monks' on account of their light coloured robes. Over 150 Benedictine monasteries were founded in England. As members of a highly successful order many Benedictine houses became extremely wealthy and influential. Their wealth can frequently be seen in the scale and flamboyance of their buildings. Benedictine monasteries made a major contribution to many facets of medieval life and all examples exhibiting significant surviving archaeological remains are worthy of protection. Despite partial removal of the crenulations, the insertion of a road surface and access bollards, the gatehouse known as Edgar Tower survives comparatively well and contains a number of architectural features of considerable interest. Elements of earlier structures will remain concealed behind later stone and brickwork and will provide important information on its construction and rebuilding.