A Scheduled Monument in Sandwich, Kent 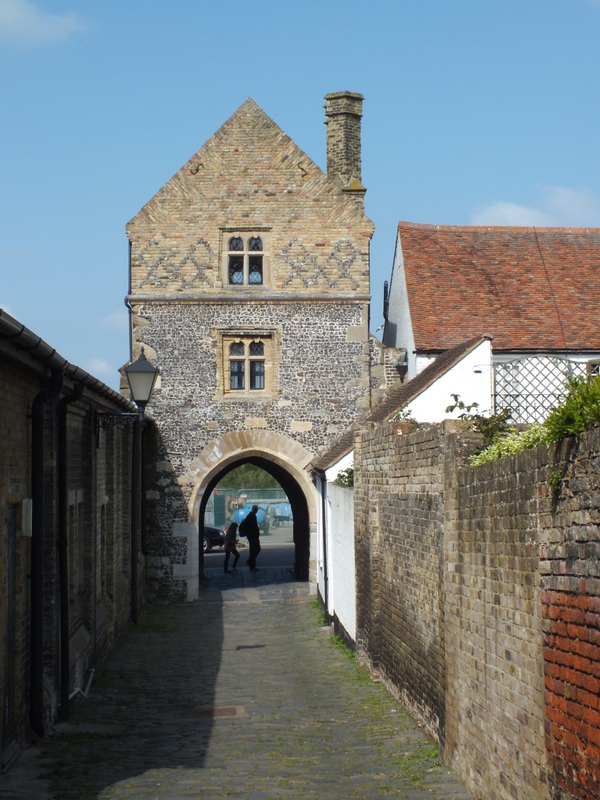 This record was the subject of a minor enhancement on 15 December 2014. The record has been generated from an "old county number" (OCN) scheduling record. These are monuments that were not reviewed under the Monuments Protection Programme and are some of our oldest designation records.

The monument includes a late 14th century stone gateway, which originally formed part of the medieval defences of Sandwich. It is situated on low-lying ground near to the quay on the south side of the River Stour.

The gate is orientated broadly north-east to south-west with pointed stone arches in each side, set in square arches with squared flints in the spandrels. There is a portcullis groove in the centre. The lower portion of the gateway, which was built in about 1384, is largely constructed of squared flints with stone quoins although some stone rubble is incorporated into the ground floor. It is three storeys high, although the top floors were added in about 1578 and are built of brick. The ends of the building are supported by buttresses up to first floor level. On the first floor there is a restored three light window with a dripstone over it, which is flanked by blocked loop lights. Between the first and second floors is a stone string course. In the second floor is a brick diaper pattern. In the second and third floor are two light windows. The roof is gabled.

The exact date of the earliest attempt to provide provisions for the defence of Sandwich is unknown although defensive works were constructed in the 14th and 15th centuries. The town played a part in the Barons’ Wars and in the late 13th century the townsmen were ordered to fill and level any trenches and dismantle fortifications constructed to oppose the King. In 1385 the constable of Dover Castle gave instructions for the fortification of the town. Grants of murage were made in the late 14th century and 15th century. In 1436 there were orders to ‘scour and cleanse’ existing ditches and to raise ‘earth walls’ on the west side of the town, as well as continue the line of the town wall. In 1451, the ‘Bulwark’, a two storey erection armed with guns, was built at the south-east corner of the town. In the later 15th century considerable quantities of stone were purchased by the town, most likely for the town wall.

Defences would have been necessary to provide protection from French and Spanish raids on the south-east coast. Despite the town defences, Sandwich was sacked by the French in August 1457.

The medieval defences included a wall around part of the town and a rampart with external ditch on the remainder. The wall was built of flint and Kentish ragstone although later repairs and additions were in brick. Partial excavation of the town rampart indicates that it was built of dumped clay, among other materials, and was laid on a thick bed of rammed chalk. There were several gates providing access through the defensive circuit. These included, running clockwise from the north-west corner of the town, Canterbury Gate, The Barbican, the Fisher Gate, Sandown Gate, New Gate and Woodnesborough Gate. The New Gate was a mid-15th century addition. Two of these gateways are still standing; the Fishergate and Barbican, (the latter not included in the scheduling) though they have been altered at a later date. Partial excavation has recorded buried remains of both the Sandown Gate and Canterbury Gate.

The Fisher Gate is Grade I listed.

Between the Roman and post-medieval periods a large number of English Towns were provided with defences. Construction of these reached its peak in around 1300 although many were then maintained for many centuries thereafter. The defences could take the form of earthen banks, ditches or masonry walls or a combination of all three. They were constructed to mark the limits of the town or its intended size and could be used to defend the town in times of trouble.

Their symbolic role in marking out the settlement and its importance was also significant and thus many defensive circuits included well built and visually impressive water-filled moats, walls and gateways. In the medieval period the development of towns was closely associated with major landowners and many towns were deliberately established next to major castles so that their lordly owners could influence and gain from the important market, trade and other functions of the developing urban centres.

Despite later alterations, the Fisher Gate is a well preserved example of a medieval gateway. It retains evidence of medieval methods of construction and contains some significant architectural details such as the pointed stone arches and portcullis groove. The area around the structure will contain below ground evidence of the construction of the gate in the medieval period. As a monument accessible to the public it also forms a valuable educational and recreational resource.