A Scheduled Monument in Eynsford, Kent 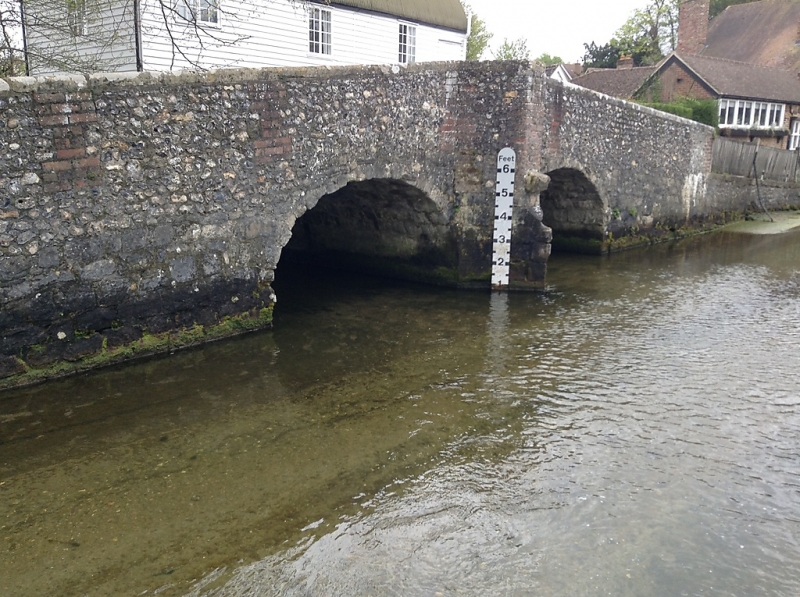 Eynsford Bridge, 83m north-west of the Church of St Martin.

This record was the subject of a minor enhancement on 18 December 2014. The record has been generated from an "old county number" (OCN) scheduling record. These are monuments that were not reviewed under the Monuments Protection Programme and are some of our oldest designation records.

The monument includes a multi-span stone bridge, dating from at least the 17th century, spanning the River Darent at Eynsford. It carries the road known as Riverside over the Darent.

The bridge includes two round-headed arches built of Kentish ragstone. Between the arches is a pointed cutwater on the upstream (southern) side and a rectangular recess, forming a pedestrian refuge, on the downstream (northern) side. The parapet is a later alteration and is built of flint and red brick. On the southern side of the bridge is a weathered medieval figure, probably an angel, with hands upraised.

Multi-span bridges are structures of two or more arches supported on piers. They were constructed throughout the medieval and post-medieval periods for the use of pedestrians and packhorse or vehicular traffic, crossing rivers or streams, often replacing or supplementing earlier fords. During the early medieval period timber was used, but from the 12th century stone (and later brick) bridges became more common, with the piers sometimes supported by a timber raft. Most stone or brick bridges were constructed with pointed arches, although semicircular and segmental examples are also known. A common feature is the presence of stone ashlar ribs underneath the arch. The bridge abutments and revetting of the river banks also form part of the bridge. Where bridges have been altered in later centuries, original features are sometimes concealed behind later stonework, including remains of earlier timber bridges.

Despite some later alterations, Eynsford Bridge is a well preserved example of a multi-span bridge dating from at least the 17th century. Deposits buried underneath the bridge will preserve valuable artefactual, ecofactual and environmental evidence, providing information about the human and natural history of the site prior to the construction of the bridge.