A Scheduled Monument in Walmer, Kent 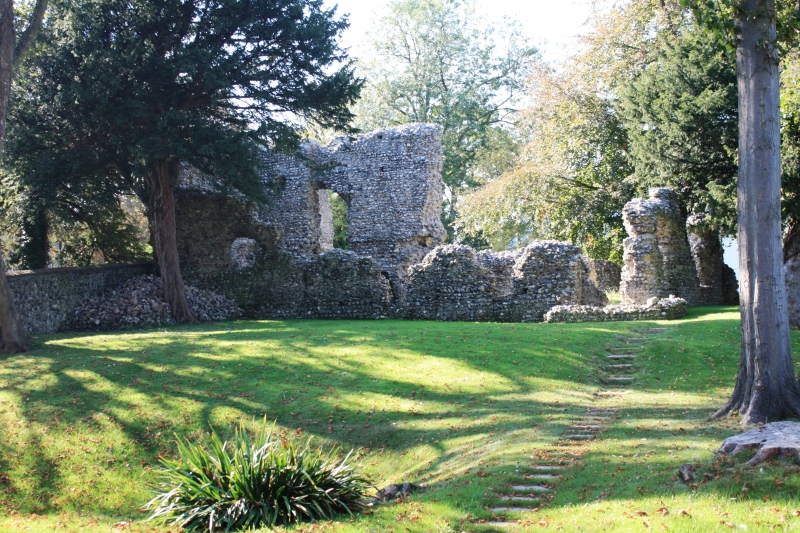 This record was the subject of a minor enhancement on 16 March 2015. This record has been generated from an "old county number" (OCN) scheduling record. These are monuments that were not reviewed under the Monuments Protection Programme and are some of our oldest designation records.

The monument includes a medieval manor house, known as Walmer Court, surviving as upstanding and below-ground remains. It is situated on flat ground near the (old) Church of St Mary in Walmer. The manor house is constructed of flint with Caen stone dressings. It is broadly rectangular in plan and about 16.5m long by 15m wide. The manor house is now roofless but the walls survive to second storey level and are up to 8m high and 1.2 to 1.4m thick. The manor house was fortified with turrets or towers at the angles, three of which survive. Mortices for timber joists are visible in the main internal north-south wall of the house and there are also traces of a first floor opening. The southern wall of the manor house forms part of the churchyard wall of the (old) Church of St Mary.

The building originally included two undercrofts, a first floor hall and several rooms above. On the west side of the manor house is a forebuilding. A moat originally enclosed both the manor house and the nearby church. It is likely to survive as a buried feature having become in-filled in the past.

Walmer Court was built in the 12th century. Documentary sources indicate that it may have been constructed by the d'Auberville family or, later, by Nicholas de Criol who married the daughter of Sir William de Auberville and gained ownership of the manor. The nearby church (Grade II* listed) may have served as a chapel to the manor house. It is also built of flint with stone dressings and has a strong visual relationship with the house. In 1966 and 1974 partial excavation on the site of the manor house recovered medieval pottery dating from about 1150 at foundation level.

Around 6,000 moated sites are known in England. They consist of wide ditches, often or seasonally water-filled, partly or completely enclosing one or more islands of dry ground on which stood domestic or religious buildings. In some cases the islands were used for horticulture. The majority of moated sites served as prestigious aristocratic and seigneurial residences with the provision of a moat intended as a status symbol rather than a practical military defence. The peak period during which moated sites were built was between about 1250 and 1350 and by far the greatest concentration lies in central and eastern parts of England. However, moated sites were built throughout the medieval period, are widely scattered throughout England and exhibit a high level of diversity in their forms and sizes. They form a significant class of medieval monument and are important for the understanding of the distribution of wealth and status in the countryside. Many examples provide conditions favourable to the survival of organic remains.

The medieval moated manor house known as Walmer Court survives well with considerable upstanding stone remains. It has group value with, and forms a strong visual and historical relationship to, the nearby Church of St Mary, a Grade II* listed building. Only part of the site has been excavated and it retains potential for further archaeological investigation. The site will contain archaeological and environmental information relating to the construction, use and history of the moated manor house.