A Scheduled Monument in Shrewsbury, Shropshire 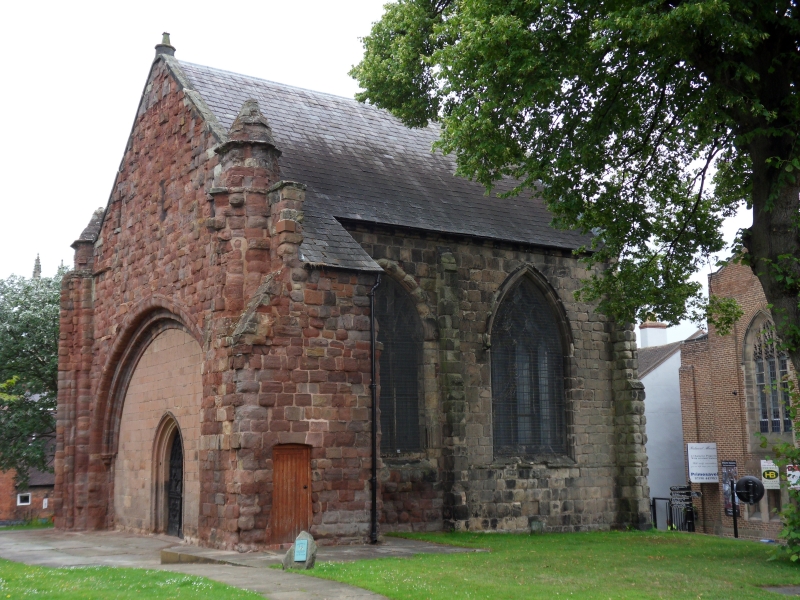 Entry Name: Remains of the crypt or undercroft to the Old Church of St Chad

The buried remains of the partially demolished crypt or undercroft to the medieval Church of St Chad. It was built in the C12, probably as a substructure to support the north transept above, strengthened in the C13 and partly demolished in 1788.

Principal elements: the buried remains of the partially demolished crypt or undercroft to the medieval Church of St Chad. It was built in the C12, probably as a substructure to support the north transept above, strengthened in the C13 and partly demolished in 1788.

Description: the buried remains of the crypt are visible as a depression at the north-east side of a grass-covered churchyard. It comprises a rectangular-on-plan structure measuring 10m north to south by 7m east to west, with the floor lying c3.5 - c4m below the present level of the churchyard, which has been substantially built up since the church collapsed. The late-C19 excavations provided evidence for the layout and form of the crypt. The walls are constructed from coursed red sandstone and measure c.1.7m in width and stand to a height of between c0.6m and c1.5m. An opening in the east wall leads into a small chamber which measures c3.3m north to south by c2.4m east to west. Its function is unknown. At the south end of the east wall there is a narrow doorway, whilst a similar doorway is placed directly opposite in the west wall. Of the five engaged columns that existed along the east and west walls, the west wall is believed to retain five column bases whilst the east wall retains four column bases. Above the bases, both walls are thought to retain sections of at least two columns. To the central row of columns four of the five bases survive, along with the lower sections of the two engaged columns and with a section of at least one of the original three free-standing columns. At the north end of the west wall there is a flight of Grinshill stone steps which were probably added in the C16 as a more convenient approach from the churchyard. The north-east corner of both the crypt and the small chamber were demolished in 1794 when the new boundary wall to Princess Street was built.

Extent of scheduling: the scheduling comprises an irregular-shaped area visible as a grass-covered depression on the north-east side of the churchyard. Given the open nature of the churchyard, only the north-east boundary of the scheduled area is physically defined, being bounded by the late-C18 churchyard wall fronting Princess Street. The other three sides of the area of protection are identified by a series of National Grid References. Its south-eastern boundary is irregular in profile and runs from the churchyard wall at SJ4921912365 in a south-west direction for c3.8m. It then turns north-west for c3.6m to SJ4921412363 before heading south-west again for c4.6m to SJ4921312358. From here, the straight line of the south-west boundary runs for c11m to SJ4920212362 before turning north-east to form the straight north-west boundary which measures c14.6m in length and meets the churchyard wall at SJ4920612375.

Exclusions: the standing remains of the Old St Chad's Church (listed at Grade II*), the churchyard wall (Grade II), all modern signs and all modern ground surfaces are excluded from the scheduling though the ground beneath them is included.

The buried remains of the partially demolished crypt or undercroft to the medieval Church of St Chad are scheduled for the following principal reasons:

* Archaeological interest: for its importance in the study of medieval Britain and the development of the parish church;

* Potential: limited excavation has revealed that the site has significant potential to reveal evidence for earlier use along with valuable environmental information;

* Documentation: the existence of documentary sources relating to the church enhances our understanding and significance of the site;

* Group value: it has a strong group value with the upstanding remains of the Old Church of St Chad (listed Grade II*), the churchyard wall (listed Grade II) and the listed buildings fronting Princess Street, Belmont and College Hill;

* Amenity value: the adaptation of the site as a visitor attraction illustrates its continuing value to the community and adds to its importance.