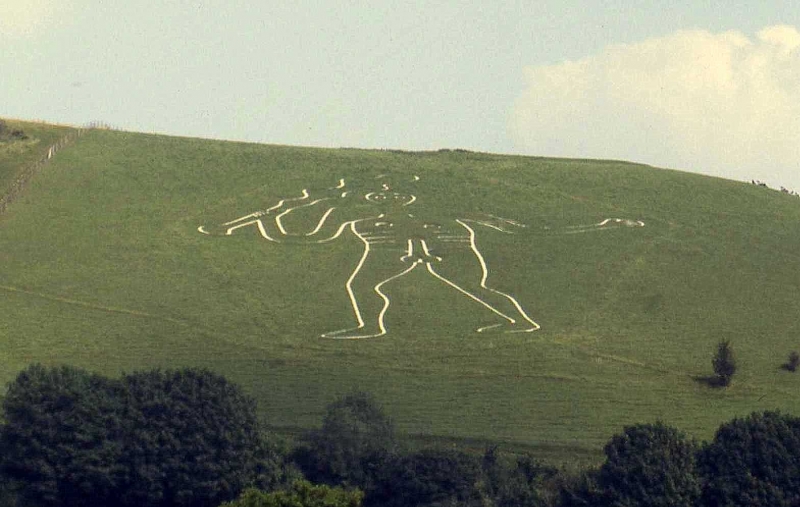 The monument includes a hill figure situated on the steep west facing slopes of Giant Hill, overlooking the valley of the River Cerne. It is known by various names including 'The Giant', the 'Cerne Abbas Giant', the 'Rude Man' and the 'Rude Giant'. The hill figure survives as a 0.6m deep turf-cut outline filled with crushed chalk of an up to 55m high and 51m wide naked man. The figure is bearing a knotted club in his right hand. His left arm is extended and the figure seems to be striding towards the left. Various anatomical details are depicted including facial features, nipples, ribs and phallus. Various studies have concluded that the figure has changed over time and in 1996 it was suggested a cloak had originally been held on the left arm and the figure stood over a disembodied head. A further survey in 2008 re-confirmed the position of the cloak or animal skin and also suggested the erect penis was in fact the result of merging a smaller penis with a representation of his navel during a Victorian re-cut.
The earliest written reference was made in 1694, when the Cerne Abbas churchwarden's accounts required three shillings to re-cut the giant. The first published survey was in 1764 and in 1774 John Hutchins claimed the figure had only been carved in the previous century. The debate concerning the figure has been wide ranging. Early antiquarians linked it with the Saxon God 'Helis'. Stukeley suggested it was 'Hercules' which is more generally supported and could perhaps imply a Romano-British origin. Others believe it was originally carved during the English Civil War by servants of Denzil Holles as a parody of Oliver Cromwell, referred to mockingly as 'England's Hercules' by his contemporary enemies. The subsequently revealed cloak added further support to the interpretation of the figure as Hercules and seemed to corroborate 19th century sources which had stated that figures, thought to represent Cenric son of Cuthred the King of Wessex, had been depicted between his legs. Folklore has steeped the Giant with many further interpretations including a suggestion that it represents the corpse of a real giant, or a Danish invader who was beheaded by the people of Cerne Abbas as he slept on the hillside. Various Victorian legends pertained to fertility being improved by couples who followed certain acts surrounding the figure.
The giant is periodically repaired with loose chalk tamped down by hand.
Further archaeological remains in the immediate vicinity are scheduled separately.

Hill figures are large scale depictions of some kind of symbol, design or motif, generally in animal form, created by cutting away turf and subsoil to create a visual contrast with the surrounding grassland. They are usually best seen from some distance away, or from the air. Some examples are believed to have originated in the Iron Age but the appearance of some has been altered in later periods. Some examples remain as obvious white figures in chalk or limestone. Those that have not been maintained may be recognised either as slight earthworks or as soil marks in dry periods. Hill figures are often interpreted as religious symbols, perhaps representing gods or totems. They are a rare and striking monument class. Although the exact date of the hill figure called The Giant is not known with certainty its importance and function is attested in folklore and academic or scientific debate. It is unique amongst hill figures and instantly recognised as an image both nationally and internationally.