A Scheduled Monument in Castle, Staffordshire 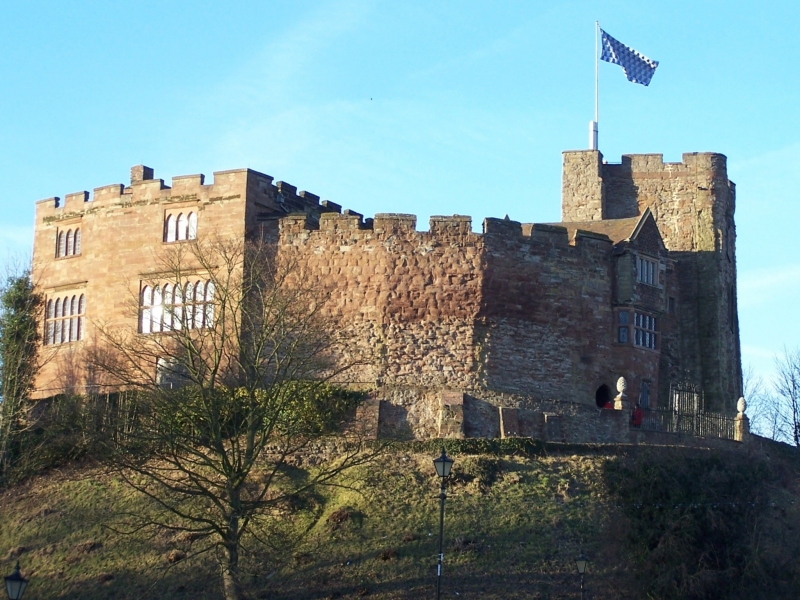 Description: the MOTTE survives as an earthen mound measuring 14.3m high, 23m in diameter at the summit and 85m wide at its base. It has been truncated on its north side by the rear boundary walls of buildings constructed in Market Street in the C17 and C18. The ditch, from which material was excavated during the construction of the motte, surrounds its base on the north and east sides, surviving as a buried feature. However, it is unclear whether the ditch continued around the south side of the motte, or whether the former course of the River Anker was utilised as a moat on this side. Excavations near the gatehouse in 1974 found that the ditch measured 16m wide and 7m deep at this location. Encircling the motte is a late-C16 PERIMETER WALK with a retaining wall (listed Grade II) of stone rubble and brick construction, with raking, brick buttresses. A stone-paved path and steps (listed Grade II) runs diagonally up the motte in a south-west to north-east direction. Installed in 1808-11, it terminates at the top of the motte at a wrought-iron gateway flanked by stone piers with pineapple finials.

The motte stands in the north-west corner of the former BAILEY. Although it was largely stripped of its buildings when the pleasure garden was laid out in the late C18, it is possible that earlier archaeological deposits associated with its medieval occupation survive as buried features.

The SHELL KEEP (listed Grade I), is polygonal on plan with inner and outer walls of double thickness. The lower sections of walling are of roughly-coursed sandstone rubble construction with yellow sandstone quoins at the angles whilst the upper sections are of larger, regularly-coursed sandstone blocks, probably dating from a late C13 or C14 rebuilding. The walls are topped by late-C18 crenellations, behind which is a late-C16 parapet walk. Its integral tower, which stands on the north-east side, has a battered base, flat buttresses and late-C18 rounded corner turrets. On the first floor there is a late-C12, round-headed window opening into which a mullioned and transomed window of two lights with pointed trefoils was inserted in the late C18. Its second floor has a late-C18 mullioned and transomed window of three, round-headed lights, over which is a hoodmould with stops. Standing to the left-hand side of the tower is the late-C16 WARDER’S LODGE which is of two-and-a-half storeys with a single window range. Its lower two storeys are of coursed sandstone construction whilst the attic storey is of brick with stone quoins and a stone-coped gable. The ground floor contains a pointed window with an early-C21 surround and late-C16 head stops to the hoodmould. To the first floor there is a mullioned and transomed window of 4-lights and to the second floor there is a mullioned window of three-lights. The two upper storey windows are double-chamfered with leaded glazing. Standing to the left-hand side of the lodge is the castle entrance which has a late-medieval, chamfered surround. On the south side of the shell keep is the late-C18 ashlar façade of the SOUTH LODGING RANGE. Of three storeys with a two-window range, it has a three-light mullion on the ground floor, mullioned and transomed windows of five and seven lights on the first floor and two, three-light mullions on the second floor; all have pointed lights. To left-hand side of this range there is a further, late-C18 mullion of two lights.
The NORTH LODGING RANGE has a six window range with late-C18 fenestration set within late-C16 window openings. Four stone bays to the late-C16 windows still survive, of which one partly blocks the late-C12 postern doorway. Windows are mainly mullioned and transomed on the first floor and mullioned to the second floor. All the first-floor windows are adorned with brattishing and all the lights are cusped, apart from a French window which has round-headed lights.

COURTYARD: a late-C16 sandstone loggia, restored in the early C21, provides access in to the courtyard from the castle entrance. Standing on the courtyard’s east side is the rear elevation of the WARDER’S LODGE. It is comprised of a gabled range of two-and-a-half-storeys with an adjoining range of two storeys. Of brick with tiled roofs, it has late-C18, double-chamfered, mullioned windows with leaded glazing. Standing to the north of the lodge is the INTEGRAL TOWER which has a late-C12 doorway to the ground floor. Above this is a building scar which is believed to represent the former position of the medieval, north lodging range. The south wall of the medieval NORTH LODGING RANGE stands on the north side of the courtyard. It is of large, red, sandstone blocks, later heightened in brick, with a blocked-up fireplace and a blocked-up doorway with timber lintel on the first floor. To the second floor there is a further blocked-up fireplace and a late-C19 window with double-chamfered surround and cusped lights. Standing to the left-hand side of the north lodging range is the late-C16 STAIR TURRET. It is constructed from brick with a plinth, string courses and two-light windows with brick mullions. The lower half, below the eaves, is decorated with diaper pattern in blue brick. Its original doorway on the east wall now contains a small, C19 window. The stair turret was built up against the mid-C15 GREAT HALL which stands on the west side of the courtyard. Its large, timber-framed, mullioned and transomed windows are replacements, probably of late-C18 date. Only one primary wall-post and the wall plate are original, along with a small portion of the sandstone sill. The remainder of the walling is of brick and its roof is tiled. Adjoining the great hall on the west side of the courtyard is the late-C16 SOUTH LODGING RANGE. Of three storeys in three bays, it is of brick with plat bands, quoins and late-C19 crenellations of ashlar. Its four-centred entrance originally had an elaborate stone surround comprised of paired, fluted columns of red sandstone standing in front of paired, shallow fluted pilasters, and a canopy. Now heavily weathered, only one column on the right-hand side of the doorway survives, along with fragments of the pilasters. Above the cornice are the remains of a heraldic shield. The mullioned and transomed windows are late-C18 replacements with double-chamfered surrounds and leaded glazing. On the south-side of the courtyard is a Norman entrance to a short section of INTRAMURAL PASSAGE, blocked when the south lodging range was built.

A late-C12 CAUSEWAY runs up the motte from the former bailey entrance on Market Street. It has two parallel wing walls (listed Grade I), extending for c.28m, with a further section of c.17m added to the north wall in the early C19. The walls are constructed from sandstone rubble, laid in a herringbone pattern, with yellow sandstone quoins at the changes of angle. The north wall has been patched and repaired extensively and less original fabric survives. Both walls are topped with early C19 crenellations. The south face of the south wing wall shows evidence of a substantial breach and several phases of rebuild, possibly including parts of a building attached to the gatehouse.

The ruined and buried remains of a late-C13 GATEHOUSE and later medieval BRIDGE stand on the north side on the former bailey. Uncovered during an archaeological excavation in 1974, the gatehouse is of sandstone ashlar construction with its basement surviving to a depth of 4.25m. A small section of curtain wall adjoins the gatehouse on its east side. The remains of a late-medieval bridge, which replaced a timber bridge, runs north from the gatehouse. It is comprised of a single arch with an ashlar face. Both the gatehouse and bridge now lie beneath a late-C20 footbridge which provides pedestrian access into Castle Grounds from Market Street.

NORTH LODGING RANGE: the State Dining Room, which is accessed off the first-floor landing of the stair turret, has an elaborate, C17 doorcase and fireplace, both with Mannerist detail and installed here in the early C19.

SOUTH LODGING RANGE: an enclosed yard at the west end contains a medieval well with C16 stone lining, timber windlass and lead-lined water tank set within a recess in the shell keep wall. On the first floor, the late-C16 Breakfast Parlour has late-C18/early-C19 panelled walls, the panelling being a mix of oak and grained softwood. Its Tudor-arched fireplace has a late-C16 or early-C17 surround which was installed here in the early C19. Ornately carved, it comprises pilasters with Corinthian capitals, a bracketed mantel shelf and a large overmantel with a pediment supported by figures of Venus with Cupid on the left-hand side and Adonis on the other. The central panel contains a heraldic shield with the coat of arms of Sir John Ferrers (1564-1633) whilst the side panels display relief carvings of biblical scenes. A walk-in cupboard in the room’s west wall has been created from a small section of the late-C12 intramural passage. The late-C16 Drawing Room is lined throughout with early-C19 wainscoting, the wood being a composite of hardwood and softwood which has been grained to resemble oak. Above the wainscoting, and extending around the room, is a late-C18 frieze with heraldic decoration in the form of 55 coats of arms set within round-headed arches. Its Tudor-arched fireplace and wooden overmantel is probably an amalgamation of different components, installed here in the early C19. Its overmantel contains a frieze with three large panels depicting how King David of Scotland was an ancestor of both King James I and Sir John Ferrers.

GREAT HALL: the roof of the great hall is comprised of tie beam and double collar trusses with struts and wind braces. Both the wall posts and the soffits of the trusses have ovolo-mouldings with fillets. The C17 doorcases and fire surround, enriched with Mannerist detail, were installed in the hall in the early C19. On the north wall, the wainscoting and paint hide the remains of an Elizabethan or early-C17 fresco, which is believed to represent Sir Lancelot and Sir Tarquin.

WARDER’S LODGE: the Ferrers Room on the first floor contains a stone, flat-headed fireplace with a wooden overmantel bearing the coats of arms of Humphrey Ferrers II and his wife Elizabeth. Probably of late-C16 or early C17 date, it is said to have been built for another house belonging to the Ferrers family and installed here at a later date.

* Rarity: although over 600 motte castle or motte and bailey castles are recorded nationally, Tamworth Castle is one of only seventy-one examples that are currently known to have been remodelled as shell keep castles. Of particular interest is the integral tower of Tamworth's shell keep, which survives virtually to its full height, a unique survival;

* Period: as one of the few classes of monument devoted to defence in the early medieval period;

* Survival: it is exceptionally well preserved;

* Potential: limited excavation has revealed that it has significant potential to reveal evidence of structures and occupation along with valuable environmental information;

* Documentation: the existence of documentary sources relating to the castle enhances our understanding and significance of the site;

* Historical interest: it was the residence of leading magnates under the King from the C11 to the C17;

* Group value: it has strong functional and spatial group value with the town of Tamworth, particularly the listed buildings standing on Market Street, Holloway and Castle Grounds;

* Amenity value: the adaptation of the castle as a visitor attraction illustrates its continuing value to the community and adds to its importance.