A Scheduled Monument in Honicknowle, Plymouth 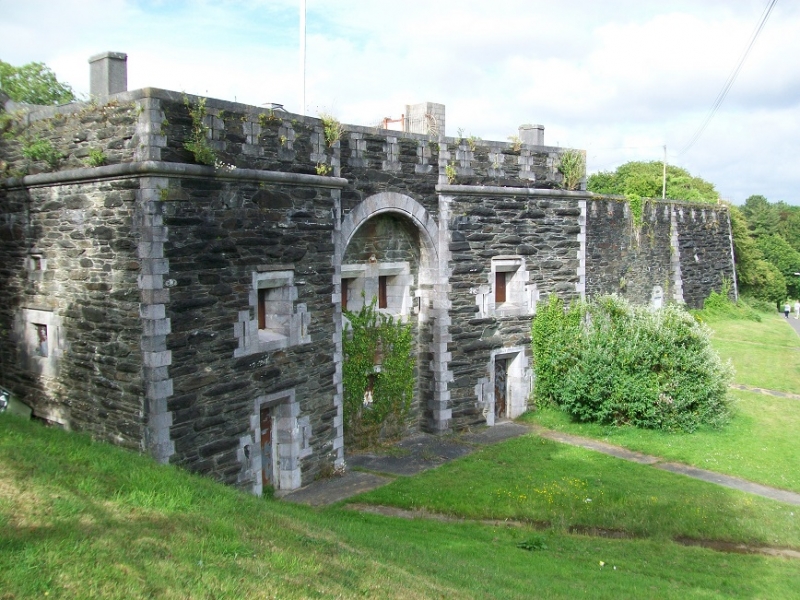 This record was the subject of a minor enhancement on 14 October 2015. This record has been generated from an "old county number" (OCN) scheduling record. These are monuments that were not reviewed under the Monuments Protection Programme and are some of our oldest designation records.

The monument includes a Royal Commission fortification known as Knowle Battery situated to the north of Plymouth on a spur overlooking a valley of a tributary to the River Tamar. It lies between Agaton Fort and Woodland Fort. Knowle Battery is a minor defence work and survives as an irregular four sided enclosure defined by sections of rampart and ditch, together with a guardhouse and part of the gorge wall. The fort has been much altered by the construction of a school building during the 1960’s. All the gun positions and magazines on the ramparts were removed or covered except for one at the north east salient, which has been monumentalised and embellished. The two storey guardhouse survives largely intact, although it has been converted. It has a single gun embrasure on each side. The loop holed gorge wall with musketry gallery survives to full height to the east. Construction began in 1863 and was completed in around 1869. It was originally designed for 13 guns in open battery and one in a Haxo casement, with three magazines behind and one in reserve in the guardhouse. By 1885, it was armed with one gun in the Haxo and three un-mounted guns. By 1896 maps show one Haxo, one mounted gun on the northern flank and three positions to the east with two expense magazines to the north, although it was disarmed soon after. During the Second World War it was used as the barrage balloon system base for Plymouth.

The Royal Commission fortifications are a group of related sites established in response to the 1859 Royal Commission report on the defence of the United Kingdom. This had been set up following an invasion scare caused by the strengthening of the French Navy. These fortifications represented the largest maritime defence programme since the initiative of Henry VIII in 1539-40. The programme built upon the defensive works already begun at Plymouth and elsewhere and recommended the improvement of existing fortifications as well as the construction of new ones. There were eventually some 70 forts and batteries in England which were due wholly or in part to the Royal Commission. These constitute a well defined group with common design characteristics, armament and defensive provisions. Whether reused or not during the 20th century, they are the most visible core of Britain's coastal defence systems and are known colloquially as `Palmerston's follies'. All examples are considered of national importance. The term battery refers to any place where artillery is positioned to allow guns to cover a particular area such as a line of communication or the approaches to a defended location. Although often contained within artillery forts designed to withstand sieges, typically including resident garrisons, many batteries were lightly defended and only manned at fighting strength in times of emergency. Batteries not contained within forts or castles were either open, with some approaches left undefended, or enclosed, often with a loop holed wall, ditch and/or fence designed to repel small scale attacks. By the late 19th century, barbette positions became the usual practice and, as the century progressed, guns were mounted in increasingly sophisticated emplacements, normally built in concrete with integrated magazines. Despite having been re-used as a school which has led to the apparent loss of some buildings and features associated with it, the Royal Commission fortification known as Knowle Battery survives comparatively well, and enough remains to understand its function as both a battery and probable barracks. It occupies an important strategic position between two larger forts and protects Plymouth from land based attack. It forms part of the rare Royal Commission fortifications built at a specific time because of a perceived threat to national security, therefore it is of military, strategic, historical and political significance.