A Scheduled Monument in Bicton, Devon 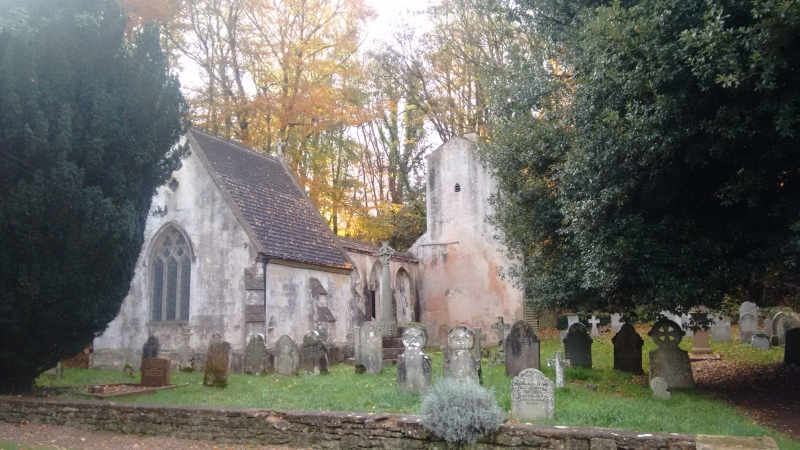 The tower and part of the nave of a 15th century church 27m west of St Mary’s Church in Bicton Park.

This record was the subject of a minor enhancement on 9 November 2015. This record has been generated from an "old county number" (OCN) scheduling record. These are monuments that were not reviewed under the Monuments Protection Programme and are some of our oldest designation records.

This monument includes the tower and part of the nave of a 15th century church situated within Bicton Park on low lying ground close to the western bank of the River Otter. The church was partially demolished and monumentalised in 1850, its eastern end being rebuilt as a mausoleum for members of the Rolle family. The 15th century church survives as a small rectangular roofed tower and the southern wall of the nave standing to eaves height. Any other surviving traces are preserved as buried features. The tower has rendered exterior walls, a slate roof and is simple low and unbutressed. The belfry has plain lancet windows and there is an arched doorway on the western side. On the south side is a memorial probably of 17th century date. The southern wall of the nave originally had three perpendicular traceried windows with mullions below although the central one has been converted to form an archway. Of the north wall only a stub is left standing. The church was deliberately ruined in 1850 by Lady Rolle who commissioned A W N Pugin to build a mausoleum for her husband John in the eastern end of the old church and had a new church erected to the east. The interior of the nave has also been subsequently used as a graveyard. The church and mausoleum are listed Grade I and the church lies within a Grade I registered garden.

A parish church is a building, usually of roughly rectangular outline and containing a range of furnishings and fittings appropriate to its use for Christian worship by a secular community, whose members gather in it on Sundays and on the occasion of religious festivals. Children are initiated into the Christian religion at the church's font and the dead are buried in its churchyard. Parish churches were designed for congregational worship and are generally divided into two main parts: the nave, which provides accommodation for the laity, and the chancel, which is the main domain of the priest and contains the principal altar. Either or both parts are sometimes provided with aisles, giving additional accommodation or spaces for additional altars. Most parish churches also possess towers, generally at the west end, but central towers at the crossing of nave and chancel are not uncommon and some churches have a free-standing or irregularly sited tower. The main periods of parish church foundation were in the 10th to 11th and 19th centuries. Parish churches have always been major features of the landscape and a major focus of life for their parishioners. They provide important insights into medieval and later population levels or economic cycles, religious activity, artistic endeavour and technical achievement. Despite partial deliberate destruction, the tower and part of the nave of a 15th century church 27m west of St Mary’s Church in Bicton Park still retains many of its original 15th century features and has been deliberately monumentalised. It lies within an historic garden and has associations with a very important local family. Its deliberate re-use as part of a mausoleum complex indicates the prevalent fashion of the time for folly building as specific garden features and is should also be viewed in this context. One of the most famous architects of the time was employed to achieve this objective thus making the result an unusual and highly important example.