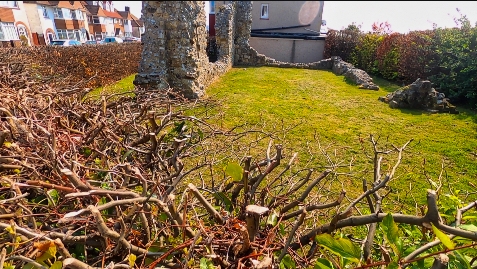 The remains of St Mary’s Church, 73m NNW of the Bull Inn.

This record was the subject of a minor enhancement on 4 December 2014. The record has been generated from an "old county number" (OCN) scheduling record. These are monuments that were not reviewed under the Monuments Protection Programme and are some of our oldest designation records.

The monument includes the parish church of St Mary’s, dating to between the 13th and 14th centuries, surviving as upstanding and below-ground remains. It is situated a short distance from the seafront at Glyne Gap, south-west of Bulverhythe. The remains predominantly consist of the walls of the chancel. The nave and tower of the church were demolished during the construction of a modern roadway. The walls are built of stone, flint and pebble, and incorporate the carved stones of an earlier Norman church on the same site. The north wall of the chancel survives to a height of approximately 3.5m at its west and east end and 0.9m in the centre. The east wall of the chancel is 0.2m to 0.5m high. The south wall is fragmentary and is about 0.4m to 0.9m high.

St Mary’s was originally built in the Norman period by the Earls of Eu. It was later rebuilt in the Early English style and is first mentioned in local records in 1372. The church has been in ruin for several centuries. The site was partially excavated in 1861 and 1929. These uncovered the ground plan of the church, a piscina in the north wall and several burials. The walls were consolidated in the late 1980s.

A parish church is a building, usually of roughly rectangular outline and containing a range of furnishings and fittings appropriate to its use for Christian worship by a secular community, whose members gather in it on Sundays and on the occasion of religious festivals. Children are initiated into the Christian religion at the church's font and the dead are buried in its churchyard. Parish churches were designed for congregational worship and are generally divided into two main parts: the nave, which provides accommodation for the laity, and the chancel, which is the main domain of the priest and contains the principal altar. Either or both parts are sometimes provided with aisles, giving additional accommodation or spaces for additional altars. Most parish churches also possess towers, generally at the west end, but central towers at the crossing of nave and chancel are not uncommon and some churches have a free-standing or irregularly sited tower. Many parish churches also possess transepts at the crossing of chancel and nave, and south or north porches are also common. The main periods of parish church foundation were in the 10th to 11th and 19th centuries. Most medieval churches were rebuilt and modified on a number of occasions and hence the visible fabric of the church will be of several different dates, with in some cases little fabric of the first church being still easily visible.

Despite having been part-demolished, the parish church of St Mary’s survives well and includes some surviving carved stones of the Norman period. The church was a key feature of the built-landscape and a major focus of religious and community life at Bulverhythe. The ground beneath the church is likely to contain archaeological evidence relating to the history and use of the site.