A Scheduled Monument in Bridge, City of London 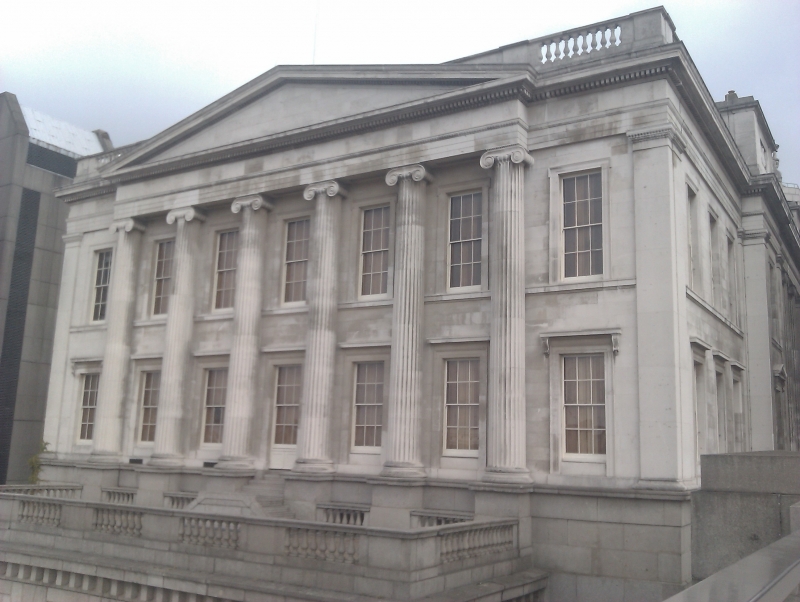 The monument includes an early 19th century livery hall situated on the River Thames waterfront on the west side of London Bridge. The hall was built between about 1831 and 1835 to the design of Henry Roberts in Greek revival style. It has two principal floors of Portland stone, accessible from London Bridge, and below these are the lower ground floor and ‘upper and lower warehousing’ constructed of granite. The principal basement, facing the River Thames, comprises an arcade supporting a terrace with balustrade. Rising between the first and second floors is a portico of six Ionic columns supporting a pediment, between which are seven window bays. The London Bridge frontage comprises 11 bays of square headed windows at the centre of which is a pair of Ionic columns in antis. Above is a balustrade and moulded attic incorporating a coat of arms. The rear of the building is a plain irregular design of brick, part-rendered. The interior includes an entrance hall with Doric colonnade, double branching staircase, 1st floor court room, dining room and banqueting hall.

The Worshipful Company of Fishmongers is one of the Twelve Great Livery Companies of the City of London, which gained their first Charter under Edward I. The first hall on the current site was apparently built in 1310. Several halls replaced this before the current building was built. This suffered damage during the Second World War and was part-restored under Herbert Austen Hall and Sir Edward Gillett. The hall overlies the second century AD Roman wharf of Londinium, as well as possible later medieval remains. These are included in the scheduling. In 1975, the horizontal timbers and piles of the Roman wharf were uncovered in the close vicinity during the demolition of Seal House but are not included in the constraint area. The remains of a Roman palace complex form a separate scheduling, a short distance to the west.

During the eighteenth century increasing architectural elaboration was given to halls, reflecting the success of livery companies, the growth of municipal self-awareness and urban identity. Until the Municipal Corporations Reform Act in 1835, boroughs (corporations), which were often based at guildhalls, acted as private bodies that existed for the benefit of their members rather than the community at large. The Act reformed the administration and accountability of incorporated boroughs and they subsequently gained greater municipal power and responsibility. This was reflected in the scale and architectural adornment of later guildhalls, which became high points of Victorian public architecture.

Despite some alterations and damage during the Second World War, Fishmongers Hall is a fine example of an early 19th century livery hall, which survives well. It is a significant testament to the development of commercial activity and trade regulation in the city of London. The site will contain archaeological and environmental remains relating to the earlier Fishmongers Halls and the Roman wharf of Londinium.