A Scheduled Monument in Coleman Street, City of London 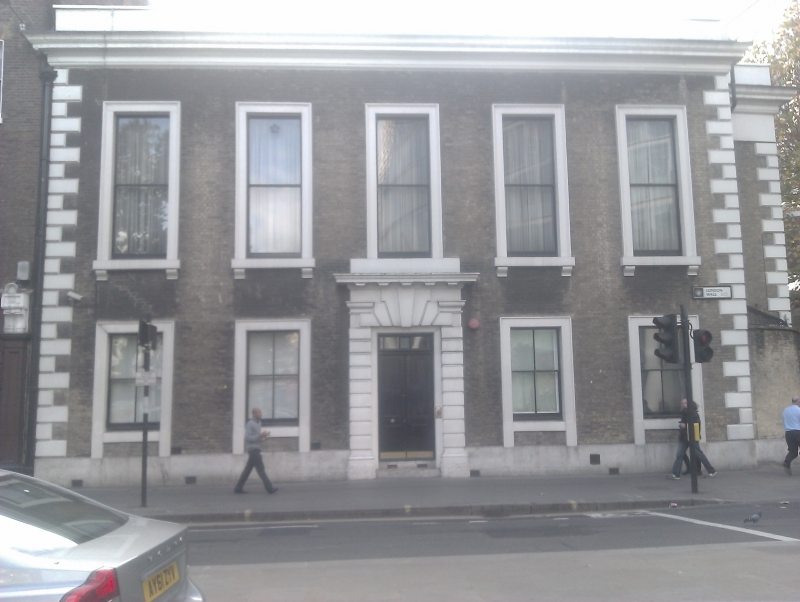 The monument includes a mid-19th century livery hall situated on the south side of London Wall and the east side of Coleman Street, near Moorgate in the City of London.
It was built in 1840 to the design of the architect J. H. Good in Neo-classical style. It is a two storey building of gault brick with painted and Portland stone dressings. The main façade, a seven window front facing Coleman Street, includes four Doric pilasters supporting an entablature and parapet upon which is a coat of arms. The north façade includes five first floor windows above a central enriched doorway. The interior of the Hall has two late 17th century carved wood cartouches with the arms of St. George and the Armourers' Company. The corridor has a carved cartouche of the City arms, also of the same date.

The Armourers’ Hall was originally the site of the ‘Dragon and five Shoppes’. The Guild of St George of the Armourers was instituted by the City of London in 1322. Now known as the Worshipful Company of Armourers and Brasiers (workers in Brass and Copper), it occupied the site from 1346. The medieval hall was enlarged in 1795 before being rebuilt in 1840. The lantern or dome of the livery hall was added in 1872.

It is listed Grade II*.

During the eighteenth century increasing architectural elaboration was given to halls, reflecting the success of livery companies, the growth of municipal self-awareness and urban identity. Until the Municipal Corporations Reform Act in 1835, boroughs (corporations), which were often based at guildhalls, acted as private bodies that existed for the benefit of their members rather than the community at large. The Act reformed the administration and accountability of incorporated boroughs and they subsequently gained greater municipal power and responsibility. This was reflected in the scale and architectural adornment of later guildhalls, which became high points of Victorian public architecture.

Armourers’ Hall is a fine example of a mid-19th century livery hall, which survives well. It is of historic interest as the site of the Worshipful Company of Armourers and Brasiers since 1346, as well as a testament to developments in commercial activity and trade regulation in the city of London.