A Scheduled Monument in Grove, Kingston upon Thames 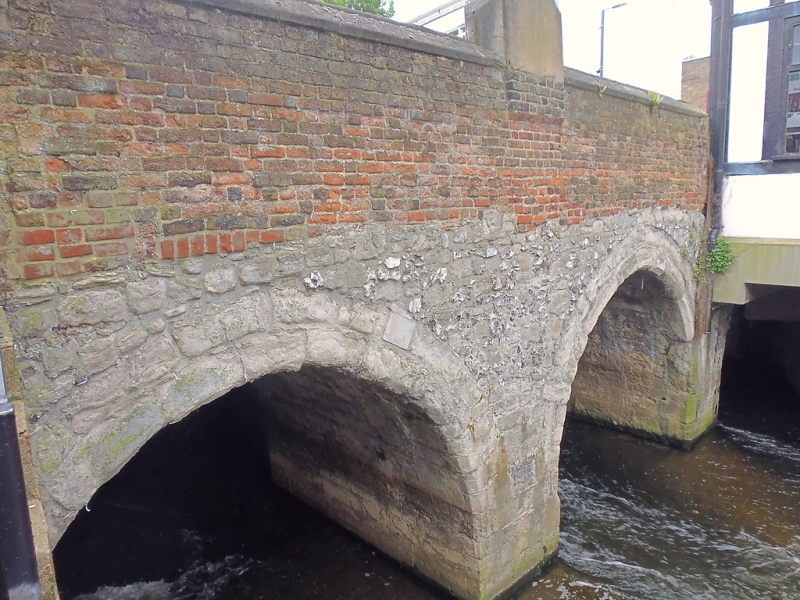 This record was the subject of a minor enhancement on 30 March 2015. This record has been generated from an "old county number" (OCN) scheduling record. These are monuments that were not reviewed under the Monuments Protection Programme and are some of our oldest designation records.

The monument includes a medieval multi-span bridge situated over the Hogsmill River, a short distance from where it meets the east side of the River Thames in Kingston.

The bridge has three semi-circular arches, dating to the 12th century, each comprising two rings of ashlar dressing above which is rubble and flint filling. The upper part is an 18th century addition and is of red brick with stone capping. On the south side the bridge has been extended in the 18th and 19th centuries. The south face of the bridge has 19th century stone columns with cubic capitals, surmounted by three columns with scallop capitals. There are no cutwaters on either side.

In the late 12th century, the Saxon ‘Clatrung Bridge’ was replaced by a new bridge crossing the Hogsmill River. In 1758 the Court of Assembly voted 220 towards 'widening and enlarging Clattering Bridge'. The brick parapet was taken down to road level, and the bridge was extended southwards by three red brick arches 7m wide. These were built beside the existing stone arches, and bonded into them, a brick parapet was raised on the southern side of the bridge, and one footpath was constructed. In 1852, the bridge was still further widened on the southern side by the addition of three more arches of stock brick. At the same time an ornamental railing was set up in place of the brick parapet, and this further enlarged bridge became known as Clattern Bridge.

The upstanding remains of Clattern Bridge are Grade I listed.

Multi-span bridges are structures of two or more arches supported on piers. They were constructed throughout the medieval period for the use of pedestrians and packhorse or vehicular traffic, crossing rivers or streams, often replacing or supplementing earlier fords. During the early medieval period timber was used, but from the 12th century stone (and later brick) bridges became more common, with the piers sometimes supported by a timber raft. Most stone or brick bridges were constructed with pointed arches, although semicircular and segmental examples are also known. A common medieval feature is the presence of stone ashlar ribs underneath the arch. The bridge abutments and revetting of the river banks also form part of the bridge. Where medieval bridges have been altered in later centuries, original features are sometimes concealed behind later stonework, including remains of earlier timber bridges. The roadway was often originally cobbled or gravelled. The building and maintenance of bridges was frequently carried out by the church and by guilds, although landowners were also required to maintain bridges. From the mid-13th century the right to collect tolls, known as pontage, was granted to many bridges, usually for repairs; for this purpose many urban bridges had houses or chapels on them, and some were fortified with a defensive gateway. Medieval multi-span bridges must have been numerous throughout England, but most have been rebuilt or replaced and less than 200 examples are now known to survive. As a rare monument type largely unaltered, surviving examples and examples that retain significant medieval and post-medieval fabric are considered to be of national importance.

Despite 18th and 19th century alterations and additions, Clattern Bridge is a good example of a medieval multi-span bridge which survives well. It includes some impressive medieval masonry.